Davidson column: Emotions of sports; and the return of the XFL 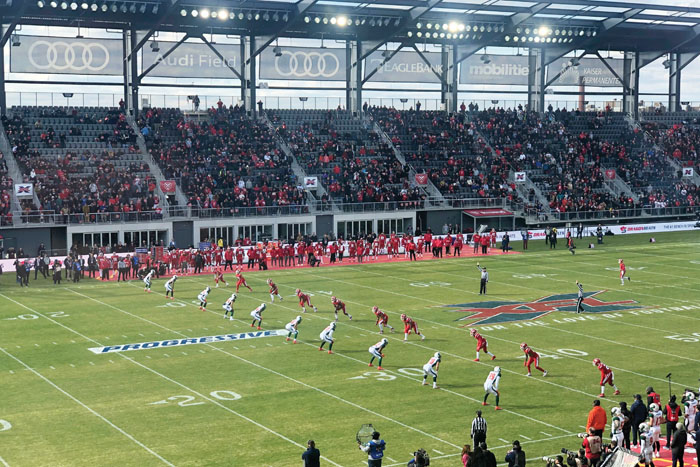 AP Photo/Stephen Whyno ... The new XFL, which began on Saturday with two games, has a unique lineup for kickoffs. Above, the D.C. Defenders, right, line up against the Seattle Dragons for the opening kickoff, Saturday, in Washington, DC. The Defenders won, 31-19.

A lot of people have asked, “Did you cry?”

Of course, they were referring to last Sunday’s Super Bowl victory by the Kansas City Chiefs, my team since my childhood.

“Yes, I teared up,” was my attempt at a macho admission. “How could I not?”

With sports comes feelings and emotions. If we didn’t care, we wouldn’t watch, right?

Maybe that’s why I “caught” the sports bug, when I was a child. With sports, you feel a wide range of emotions — happiness, pride, exhilaration, frustration, anger, sadness, just to name a few.

Didn’t the late basketball icon Jim Valvano, during his epic speech while battling cancer, say that we should laugh, think and be moved to tears everyday?

Valvano, of course, was speaking in broader terms than sports, but it’s easy to be moved to tears if you watch enough sports.

You can punch the air and scream when your team makes that buzzer-beating 3-pointer or connects for a walk-off home run after being down to the last strike, but seeing that four-year player hug mom and dad on Senior Night will move you just as much, if not more. You can be mad as heck at a referee’s call, but melt when a 24-year-old quarterback is hugging his 61-year-old coach, achieving a lifetime dream of winning a Super Bowl.

So, yes, seeing how the Chiefs’ victory, 50 years in the making, affected so many — myself included — there were tears indeed.

Are you ready for some more football?

Vince McMahon is again the owner and creator, but instead of trying to make it a shock-value, professional wrestling type of football game, the XFL vows to be more legit this time around.

The season started yesterday with two games and there’s two more today, for your viewing pleasure. Three networks are involved and today’s action can be seen on Fox (2:00) and ESPN (5:00).

Oliver Luck is the commissioner of the league and he is a serious, no-nonsense guy. A former NFL player himself and father of now-retired Indianapolis Colts QB Andrew Luck, the commissioner had a career in college athletics, most notably at West Virginia University and with the NCAA.

I put my faith in Oliver Luck that this will be real football — with a few twists. The XFL will still be about entertainment, as in offense. League officials believe fans want to see exciting plays and a lot of scoring.

Punts — Don’t bother trying to pin a team inside the 5-yard line. The ball will come out to the 35-yard line, anyway. The idea is to encourage more “going for it” on fourth down.

Extra points — None will be kicked. Attempts will be scrimmage plays from your choice of the following: If you want one point, you can try from the 2-yard line. A two-point conversion will come from the 5-yard line and if want to go for the big prize, a team can score a three-point conversion from the 10-yard line. Now that actually sounds pretty interesting.

Overtime – This is really wild. A tie after regulation will result in a five-round shootout (similar to soccer or ice hockey) of two-point conversions. And to speed that process up, both end zones will be used. Both teams’ offenses and defenses will be at the ready, when its their turn.

Replay reviews — There will be no coaches’ challenges. A “sky judge” in the press box will review all questionable plays. And reviews will be limited to 60 seconds.

All of the above are just for starters. There will be plenty of interesting use of in-game video and audio opportunities.

So, go ahead, pick a team. They all have legitimate coaches and rosters full of former NFL and mostly major college players, many of which were in pro training camps last summer. Your choices:

• DC Defenders, coached by Pep Hamilton, a Charlotte native who has coached for 23 years, including stops as the offensive coordinator at Stanford and the NFL’s Colts. Former Ohio State star Cardale Jones is a quarterback.

• Houston Roughnecks, coached by well-traveled June Jones, who once led the Atlanta Falcons. Connor Cook, former Oakland Raider, is the QB. Former Catawba player Sam Mobley is a wide receiver and had a 39-yard TD catch in Saturday’s opener.

• New York Guardians, coached by Kevin Kilbride, who had long career in the NFL. Former UNC quarterback Marquise Williams is on the roster.

• Seattle Dragons, Jim Zorn, who had a nine-year career at QB for the Seahawks, is the coach. Former UNC player Austin Proehl is a wide receiver. N.C. State’s Jonathan Alston is a cornerback.

So, maybe the XFL will work this time around.

After DC defeated Seattle in the inaugural game on Saturday, 31-19, NBC analyst Chris Collinsworth tweeted: I LIKE THE XFL. Coaches I respect, big plays, fresh rules, and a professional broadcast. Congrats guys.

I was OK with the few minutes I saw as well.

However, if you don’t like the new XFL, or you’re just burned out on football, just wait a few days: Major League Baseball Spring Training begins on Tuesday.