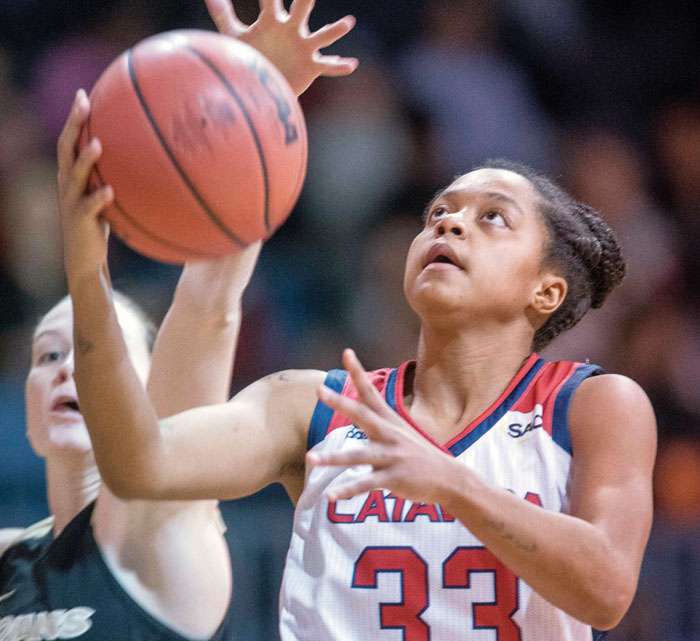 Terrence Baxter was announced as the head coach in pregame introductions, as usual, but he wasn’t on the bench. He also missed Wednesday’s game at Wingate. Catawba administrators cited “personal reasons” for Baxter’s absence. No timetable was given for his return.

“I’m just keeping my head down and trying to keep the team focused for however long it may be,” McCutcheon said.

McCutcheon, who finished up his college playing career at Pfeiffer, handled the Wingate road win. Saturday’s easy romp — 85-49 against overmatched Mars Hill — didn’t cause anyone any stress.

“Our opponent doesn’t matter,” McCutcheon said. “We have a style and we have to be true to it. I was pleased that we didn’t get lost today. We stayed solid. We took care of the things we needed to take care of.”

“We wanted to get a big lead, wanted to make sure everyone got a chance to play today,” said freshman guard Lyrik Thorne. “Our teammates who don’t get to play as much, they still support us. They encourage us. They prepare us every day in practice for the tough games. My main focus today was to help them play a lot.”

Smooth and quick, Thorne was excellent, one of her best shooting days. She shot 5-for-6 for 14 efficient points. She was 2-for-3 on 3-pointers and nailed a tough pull-up in the lane that she’s been working on.

“Our shooting percentages have been going down, but we can shoot and we wanted to prove today we can shoot,” Thorne said. “Early in the game, we made three 3-pointers, it was 9-0, and Mars Hill had to call a timeout. That was a good sign. That let us know we were back.”

Taisha DeShazo, Madi Hallman and Thorne made those early 3-pointers. Catawba led 12-0 by the time the Lions (2-20, 0-16) finally made a shot more than four minutes into the game.

“We got some shots to fall today,” McCutcheon said. “A big part of that was passers getting the ball to shooters on time, and not late. I also thought our defensive focus was good. That led to some fast break chances.”

It’s not easy to play 18 people at least six minutes each, but with that huge lead, the Indians were able to accomplish that. Thorne, who played 22 minutes, had the most floor time.

The Catawba player for whom Saturday’s game meant the most was junior Anna Gardner, who played 14 minutes. She was competing against her sister, Mallory, a Mars Hill freshman. They were teammates at South Davidson High in Denton.

“It was fun, especially because today was Mallory’s birthday,” Anna said. “She’s bigger and stronger than me and she can post me up. But I made a few shots today. It was good to see them go in.”

Catawba got a whopping 46 points off the bench. Sara McIntosh, a freshman post, went 8-for-8 from the foul line and scored 10 points.

Catawba had a 46-26 edge on the glass, with DeShazo, a rangy wing player, soaring for eight boards. Talia Barnes had six. Mars Hill had only three second-chance points.

“We didn’t take them lightly,” Thorne said. “We played hard. We did a lot of little things right.”

Next for the Indians is a home game against Coker on Wednesday.

Thorne said it hasn’t been a major adjustment with McCutcheon calling the shots.