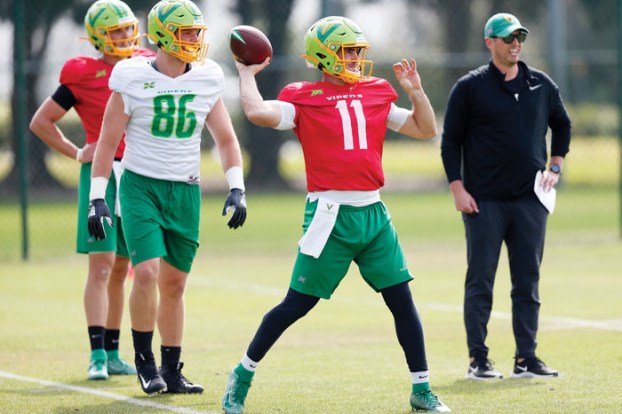 XFL looking to bring fans inside the game with more audio

XFL makes its return this weekend 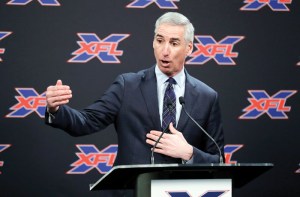 FILE – In this Feb. 25, 2019, file photo, XFL Commissioner Oliver Luck gestures during a press conference in Seattle. When the XFL debuts in February, it will take a “Star Trek” approach of going where no football league has gone before. (AP Photo/Ted S. Warren, File)

By JOE REEDY AP Sports Writer
LOS ANGELES (AP) — The XFL’s greatest contribution to football the first time around was the skycam. When the league returns Saturday, the focus will be on bringing fans further inside the game.
ABC/ESPN and Fox will have access to the coach-player communication systems and can go live with the audio at any time. They will also be able to go into the replay booth as plays are being reviewed.
“To hear a play call and the verbiage, is the biggest thing that people will be talking about,” Fox analyst Joel Klatt said. “How often can you see a coach call plays? When you are able to hear the play calls, you can see the philosophy of a team and coach.”
Bill Bonnell, who is ABC/ESPN’s coordinating producer for XFL, oversaw production of the XFL for NBC in 2001. He said the biggest difference this time is the games will be presented as games, instead of feeling like a WWE show. The first XFL used mostly WWE announcers and cameramen.
There will not be a WWE slant this time. The main reason the league is on ABC/ESPN and Fox is because of how they televise football.
“It’s not going to be anything like the first time around,” said Bonnell, who also produces ESPN’s broadcast of the College Football Playoff title game. “I think hardcore fans are going to enjoy watching football. The sound is going to be the innovative part. Bringing the access and the sound is how we are trying to bring out fans.
“This time it seems much more like a football league that we are covering. It is leaps and bounds ahead of the first XFL.”
The replay review process could be another thing fans discuss after the first week of games. The networks will be able to air conversations between the official on the field and the booth. They will also be able to discuss the review with an XFL supervising official following the review.
“In a traditional game we would have a rules expert. Now you are hearing the official making the call and discussing it,” Bonnell said.
Fox’s Curt Menefee said he’s pleased questions about a game can be answered in real time.
“The one thing you don’t want to happen is when you leave a game, something was not called properly. Now questions will be answered,” he said.
The league and broadcasters also won’t shy away from discussing gambling. Point spreads and the over/under will be mentioned during games and will be included on graphics.
ABC has the league’s first game Saturday with Seattle at DC, followed by Los Angeles at Houston on Fox. Fox kicks off Sunday with Tampa Bay at New York with St. Louis at Dallas to follow on ESPN.
Bonnell said games will typically have 16 cameras, which is equivalent to a regular college football game. The skycam will be at every game as well as two remote cameras to go on the field.
Of the league’s 43 games — 40 regular season, three playoffs — 24 are on ABC or Fox. The remainder will air on ESPN, ESPN2, FS1 and FS2. Saturday games will be on ABC and Fox while Sunday will be mainly on ESPN/ESPN2 or FS1/FS2.
The Alliance of American Football folded after eight weeks last year but its ratings showed there is an appetite for spring football. The AAF averaged 400,000 viewers per game but only one game was on CBS with the rest on CBS Sports Network, TNT and NFL Network. The games on NFL Network drew audiences equivalent to NFL preseason games.
“A lot of people have tried spring league and someone has to get it right. There definitely is an appetite,” Bonnell said.