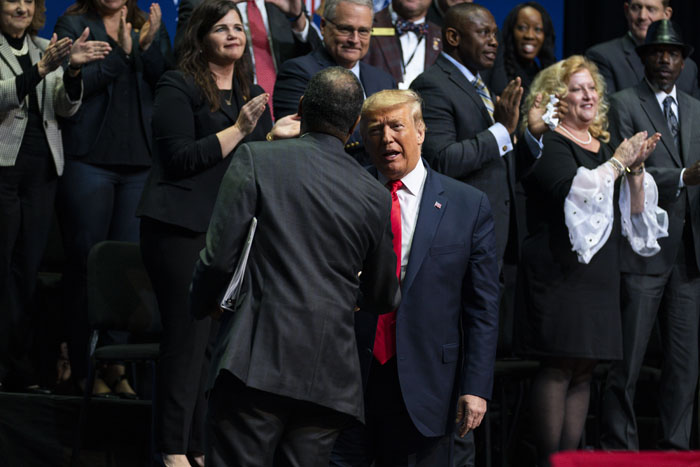 CHARLOTTE, N.C. (AP) — President Donald Trump came to North Carolina on Friday to showcase a new economic revitalization program, but he quickly took a verbal detour to reprise complaints about his impeachment by the House, saying Democrats should have to list a “failed impeachment hoax” on their resumes.
As he left Washington for his first trip since being acquitted by the Republican-controlled Senate, Trump said of the Democrats, “I think there’s a lot of evil on that side.”
Trump was speaking to a friendly crowd at the Charlotte summit on economic opportunity for those in low-income areas. The event took on the feel of one of his raucous political rallies, with audience members at one point leaping to their feet and breaking into chants of “Four More Years, Four More Years.”
Trump, soaking up the sentiments, wisecracked: “Now, if you want to drive them crazy, go: ‘Twelve more years. Sixteen.”
Speaking of his Democratic accusers back in Washington, Trump told the audience: “It was the impeachment hoax. That was a thing of the past. Now they have a failed impeachment hoax. They can put that on their resume.”
Trump revived portions of this week’s State of the Union address and made a few overt appeals for support from African Americans, a demographic that polls show he fares poorly with.
He also took pleasure in making note of the Democratic disarray in Iowa, where problems tabulating votes in the state’s leadoff presidential caucuses left the results in dispute.
Trump said he’d heard fretting that “This a disaster. Trump is going to kill us on this one.” He added: “They’re right. They’re right.”
Before leaving Washington, Trump told reporters on the South Lawn that reports that acting White House chief of staff Mick Mulvaney was on his way out now that the impeachment drama is over were “false.”
People close to Mulvaney, who was among the White House staffers traveling with Trump on Friday, pushed back against the notion that he will soon leave his job.
Trump was in Charlotte to deliver closing remarks at the North Carolina Opportunity Now Summit at Central Piedmont Community College. It’s the first in a series of trips he will be taking to promote opportunity zones, the White House said.
He announced a new campaign to revitalize under-served neighborhoods and said the effort would be called “Opportunity Now” but gave few details. He called it “a big deal” that would involve community leaders, workers, entrepreneurs, employers and faith leaders.
Thousands of neighborhoods around the country have been designated as opportunity zones under tax-cut legislation Trump signed into law in 2017. Tax breaks are provided for certain investments in these lower-income areas by businesses and wealthy individuals.
“We believe in no American left behind. That’s what it’s all about,” Trump said.
Trump introduced Tony Rankins, an Army veteran from Cincinnati who turned his life around and overcame homelessness after getting a job with a construction company that invests in opportunity zones. Rankins was one of Trump’s guests at the State of the Union address this week, and Trump called him up to speak on Friday.
Trump’s remarks included overt appeals for support from African Americans, including mentions of legislation he signed to permanently fund historically black colleges and universities, and to overhaul federal criminal sentencing policy.
Housing and Urban Development Secretary Ben Carson, who introduced Trump, event went as far as saying his boss “is not a racist.” Carson said Trump, after buying his Mar-a-Lago club in Palm Beach, Florida, fought for Jews and blacks to be admitted.
___
Associated Press writers Kevin Freking and Jill Colvin in Washington contributed to this report.
___
Follow Darlene Superville on Twitter: http://www.twitter.com/dsupervilleap