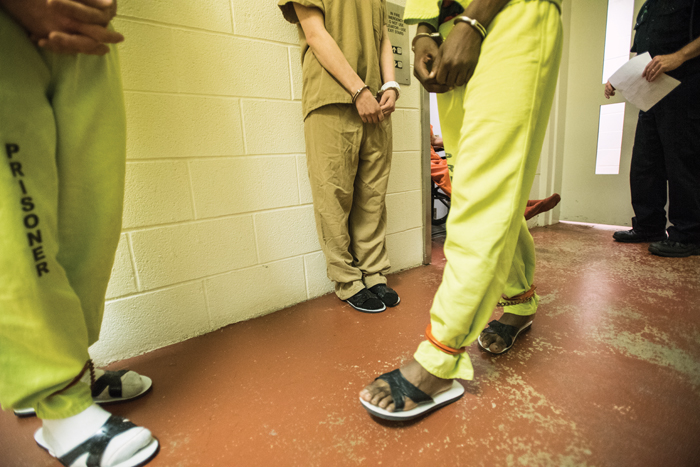 This week, Rowan and Cabarrus counties finalized an agreement that would allow half of those inmates to be housed in Cabarrus County for at least a month.

On Jan. 28, an inspector told the Rowan County Sheriff’s Office there were too many inmates in one dorm and the agency would have to move them. As a solution, Auten said he approached Cabarrus County Sheriff Van Shaw, who said he could start with 15 inmates.

The Cabarrus County Board of Commissioners met on Monday and suspended normal rules in an effort to expedite the process. The board approved an interlocal agreement retroactively effective Jan. 28 and continuing through Feb. 28. If necessary, both counties can agree to extend that date.

If the Cabarrus takes 15 inmates, it will put Rowan County in good standing with the state, Auten said. That means he won’t immediately need to find space for 15 more.

It will cost Rowan County $45 a day per inmate to house individuals in Cabarrus County. However, that number could increase if an inmate has a medical issue or other unusual circumstances, Auten said.

During the Feb. 3 Cabarrus commissioners’ work session, Cabarrus County Chief Deputy James Bailey said revenue from the extra inmates would allow for some county infrastructure projects there to be completed.

“What we’re doing basically is generating funds and not putting that on the burden of the taxpayer,” Bailey said. “(Cabarrus) County management has allowed us to take some of those funds and turn them back into some infrastructure projects we have.”

Cabarrus has enough space to house inmates from other counties, Bailey said.

As of last week, there were 28 inmates in the Rowan County Jail who had already been prosecuted and sentenced but were awaiting space within the N.C. Department of Corrections, said Rowan District Attorney Brandy Cook. The number dipped briefly to 21 this week, but rose again to 28.

As of last week, Cook said, there were 57 inmates in the Rowan jail who had pending probation violations.

The average daily population for the Rowan County Detention Center has steadily increased in the last six years, going from 281 in 2014 to 301 in 2015.

Officially, the jail had bed space for 368 inmates,

Auten said there’s no specific reason accounting for the higher-than-usual number of inmates in the Rowan County jail these days; it’s an amalgamation of multiple factors.

One reason there are so many people currently in jail, Auten said, is because this is a “Superior Court Week,” meaning there are a lot of inmates who’ve been transferred from other agencies who have superior court cases in Rowan County.

“You may have 20 people come in on writs and that number just really goes crazy,” he said.

Although it’s a temporary stay, it still means the sheriff’s office has to find space to house those inmates while cases come before judges in Rowan courts.

Auten suggested the problem was not one associated with a slow-moving district attorney’s office, saying, “They are moving more cases per year than are filed and that’s the norm in many counties.”

And Cook said her office handled 400 more cases last year than the number of filings. In 2019, she said, her office tried and convicted seven murder defendants in addition to several other felony cases before a jury.

“Our office is tough on crime and, since we do not plea bargain away every case, some defendants have to wait longer for a jury trial,” she said.

Cook said her office works closely with the jail to identify and review appropriate cases that can be addressed at an earlier court date.

“In fact, we have an assistant district attorney who is assigned to this responsibility. This has resulted in significant taxpayer savings for our county,” Cook said.

Auten said there are factors that could belabor a case, including waiting on evidence from a state lab or scheduling issues, all of which could postpone a “simple” trial.

The easy answer, Auten said, is to go to the Rowan County commissioners and say, “We’re going to have to build another building (jail).”

“But who knows what that would cost. My guess is $10 to $12 million, plus about 20 employees at the cost of an additional $1.2 million a year to the payroll,” Auten said.

And while building another jail is a solution, Auten said he doesn’t feel it’s the best solution.

“I don’t know if I could hire 20 people if I had a building tomorrow. It’s a tough job,” Auten said.

His goal remains to “figure out what we’re doing and what we can do better.”