State of the District talk streams ‘renewal’ vision to all schools 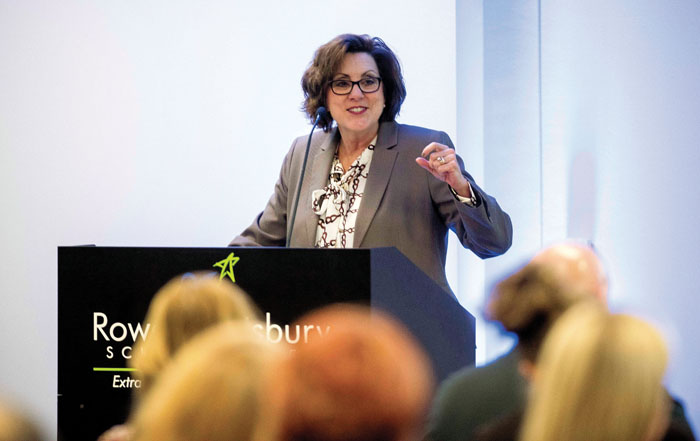 Rowan Salisbury School System Superintendent Dr Lynn Moody gives a state of the district update to school employees Feb. 5 that was broadcast to all of the schools.

SALISBURY – In an internal address live streamed to each school, Rowan-Salisbury Superintendent Lynn Moody spoke Wednesday morning about “renewal” and the new accountability model being built by the district.

The stream allowed Moody to speak to all staff in real time rather than attempt to coordinate getting a few thousand people in one place at the same time. A major part of the address was focused on the how the school system will grade student performance as it moves away from standardized testing that has been the measure of success in the state and across the country for decades — the accountability model.

Moody said she believes standardized testing will be looked back on as a mistake in education. As a result, the district is now looking at measuring student success in ways that go beyond testing.

Students with a plan will fall into three categories: enrolled, enlisted or employed. Enrolled students should be preparing to attend a college, enlisted students are about to enter military service and employed students should have a full time job, at least 30 hours a week, lined up.

The district is going to gather proof from seniors in their last couple weeks before graduation. Students who do not fall into one of the three categories will be considered to be without a plan.

Moody also spoke about how the district is attempting to track the three major components of renewal: academic skills, interpersonal skills and unique life goals for students.

The talking points about accountability are not new, but this is the first time they were presented en masse to Rowan-Salisbury Schools employees. At the last meeting of the Rowan-Salisbury Schools Board of Education on Jan. 27, Chief Strategy Officer Andrew Smith gave a presentation on the model and how the district will be attempting to measure each area.

Moody ended the address by telling a story of what made education important to her. Her father, who taught physics for 37 years, was dying. His nurse at Moses H. Cone Memorial Hospital in Greensboro was a former student. She came into the room and started crying, telling Moody’s father she was hoping it wasn’t him when she read his chart. Moody’s father quipped that he would have made the nurse study harder in school if he knew his life would depend on her. The nurse reminded him she made straight As in physics.

“If you knew who your charge nurse was going to be, would you teach that child differently?” Moody asked. “Would you do something to motivate their passion in a different way? Would rigor come to a different level than it is in your classroom? Would you expect more? Would you do more?”

Work on the model began in October. While the talk was broadcast to all the schools, the room at the forum was still full of local educators and other district staff. There were no students in schools because it was one of the districts E-Learning Days. Teachers make plans in advance and students do activities at home. There are windows set up by teachers when students can call with questions about work they are performing on devices.

Schools each sent staff to attend the address in person. When Moody finished her talk, the floor was opened for discussion. Attendees formed discussion groups on the core components of “renewal.”

Smith brought the group back together to share what they discussed. One said staff should demonstrate good interpersonal skills in schools. Another spoke about exposing students to things that could be their passions and not overlooking small things.

The district is planning a more public rollout of the model later this year.