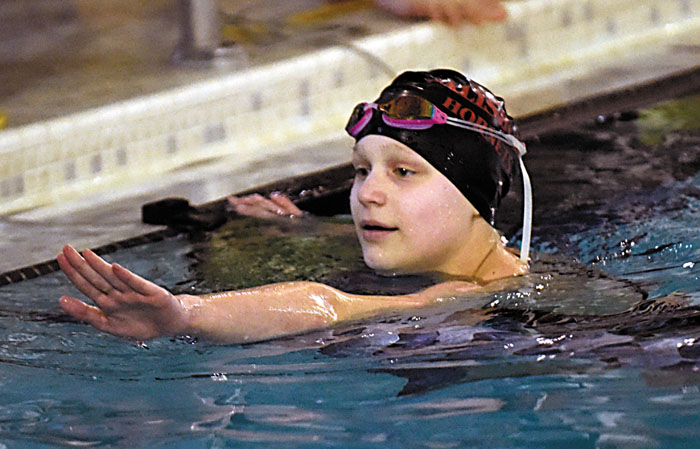 “Our team went up to Cary on Wednesday, but I had a bout of vertigo, so I didn’t go up until today.” Pittman said. “There were some weather issues in a lot of places around the state, but we were swimming in a grounded pool, so there were no concerns. The meet just rolled right on.”

Emily’s twin sister, Katie, placed third in the 200 IM and fourth in the 100 backstroke. Emily repeated as state champ in the 500 freestyle. This time she also won the 200 free. She was a close but disappointing third in the 200 free as a sophomore after entering the meet as the favorite.

“She got out-touched in the 200 last year, but she was looking to make a statement today,” Pittman said. “She made it.”

Emily, a West Virginia commit, swam 1:50.56 to take the 200 with relative ease and swam 4:52.40 in the 500, about six seconds faster than her seed time. She needed that extra speed. Her seed time wouldn’t have been good enough to hold off Carrboro’s Emily Carpenter.

“The jitters got to Emily a little bit last year,” Pittman said. “But there were no jitters at all today. She was calm and collected all day and she was able to swim her races. Her goal for the 500 was to get into the 4:52 range, and she accomplished that.”

Katie placed eighth in both of her individual events as a freshman. As a sophomore, she moved up to a third and a fourth. She repeated those finishes on Thursday.

“In the 200 IM, the girl from Community School of Davidson is a record-holder, but Katie stuck with her and didn’t let her just walk away with it,” Pittman said. “Katie was really good today.”

“That event was different this year for us, having to swim it twice, with a morning prelim and then an afternoon final,” Pittman said. “We were about a second faster in the morning swim, but our girls did a good job. It’s not easy sitting around on a pool deck for hours, and then being at your best.”

Salisbury’s 200 medley relay team of the Knorrs, Hollingsworth and Anna Grace Woolly also picked up points with a 13th-place finish.

Emily’s championships were worth 20 points each. Katie got 31 for her two high finishes. The Hornets added another 30 in the relays to finished with 101 points.

There are a lot of charter schools competing at a high level. While the Hornets were eighth in the team standings, they were third among traditional public schools, behind champion Carrboro and East Surry.

“I was very happy with our season, very proud of all the hard work and all the accomplishments,” Pittman said. “Winning county and conference and eighth in the state — that’s a great season.”

Roshen Amin scored the only points (f0ur) for the Salisbury boys with his 13th-place effort in the 100 butterfly.

Amin is a senior. In his final event, he swam a lifetime best of 55.89 seconds.