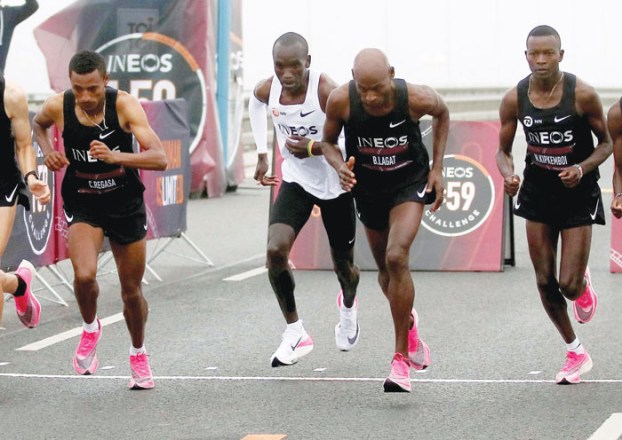 In this Oct. 12, 2019 photo, marathon runner Eliud Kipchoge from Kenya, white vest, wearing Nike AlphaFly prototype running shoe, and his first pacemaking team, wearing pink Nike Vaporfly shoes, leave the start line on Reichsbrucke during the INEOS 1:59 Challenge attempt to run a sub two-hour marathon in Vienna, Austria. Nike has a new racing shoe; The Air Zoom Alphafly Next%, which was unveiled at a flashy fashion show in New York on Wednesday night, Feb. 5, 2020. Kipchoge wore a prototype of the shoe when he ran the world's first sub-2-hour marathon in an unofficial race in Octob(AP Photo/Ronald Zak, File)

To pick the favorites in this year’s Olympic marathon, just glance at the shoes of the runners on the starting line.

Anyone wearing Nike’s Vaporfly model may already have a head start.

The shoe has shaken  up distance running  since the world’s largest sports apparel company introduced it four years ago, with technology credited for helping runners shave minutes off  their times. To some, the advances are an exciting revolution. Others have called it “technology doping” that risks reducing marathons to a shoe competition.

“Running is so simple. That’s why people love it so much. Now we have a shoe that is blurring that,” said Geoff Burns, a runner and Ph.D candidate at the University of Michigan’s School of Kinesiology.

The controversy prompted World Athletics, the sport’s governing body, to issue its most stringent shoe regulations in decades ahead of the Tokyo Games. But the Vaporfly escaped a ban, and the debate continues.

Now, Nike has a new racing shoe that also squeaks by the new rules: The Air Zoom Alphafly Next%, which was unveiled at a flashy fashion show in New York on Wednesday night. Eliud Kipchoge of Kenya wore a prototype of the shoe when he ran the world’s first sub-2-hour marathon in an unofficial race in October.

Vaporfly shoes have become a common sight at marathons all over, easily spotted with their neon green or pink hue.

Many marathoners are gladly paying the $250 price tag on Nike’s website — and sometimes more — even as they wonder how much credit they can personally take for improved results.

Bryan Lam, an amateur marathoner in Washington, D.C. said he spent $400 for a pair of StockX ahead of the London Marathon last spring because the version he wanted was sold out elsewhere. He ran the marathon in 2:59.30, seven minutes faster than his previous personal best, a result he called “insane.” It helped him achieve his lifelong goal of qualifying for the Boston Marathon this year.

“I’d like to think that it was because of all of my training for the London Marathon but I do think the shoes had something to do with my performance,” Lam said. “It’s definitely not a level playing field when those who can afford the shoes have that type of advantage.”

What differentiates the Vaporfly is a foam midsole that is lighter and less dense than others, allowing for extra cushioning without adding weight. The shoe also has a carbon-fiber plate that acts like a lever to reduce the work at the ankle. Independent and company-sponsored studies have found that the shoe gives runners a 4% edge in energy efficiency.

The Air Zoom Alphafly Next% steps it up a notch with two “air pods” in the sole for extra cushioning. Both the Vaporfly and the Alphafly meet a World Athletic rule that limits the sole thickness to no more than 40 millimeters. The Alphafly will be available for sale to Nike members starting Feb. 29, meaning it meets a new rule that shoes must be available on the open market by April 30 to be allowed at the Tokyo Games.

Kyle Barnes, an exercise science assistant professor at Grand Valley State University in Michigan, conducted a study around two years ago that compared the Vaporfly shoes to Nike’s Zoom Matumbo 3 (a track spike) and Adidas Adizero Adios 3. His findings showed about 4.2% more efficiency by wearing the Vaporfly model.

Bottom line: Barnes estimated that slipping into the Vaporfly could potentially trim several minutes off a professional’s time and in the vicinity of 10 minutes for, say, a 4-hour marathoner.

“It is a form of technology doping,” said Barnes, who co-authored the study with exercise physiology professor Andrew Kilding from Auckland University of Technology in New Zealand. “You’re at a disadvantage not being in those shoes. … Everything is happening so quick right now in the shoe industry.”

World Athletics sought a middle ground in its recent decision, making clear that wearing the Vaporfly will not constitute cheating. But in tightening its rules, the Monaco-based organization signaled a new era of vigilance.

The governing body said an expert working group will be created to assess new shoes entering the market and placed a moratorium on certain criteria for shoes. It also banned any shoe with a sole thickness of more than 40-millimeters, or that contains more than one plate.

The Vaporfly controversy has drawn comparisons to the advantages that swimmers received wearing the Speedo LZR Racer, a full-body compression suit that trapped air for buoyancy and improved performance, leading to a slew of world records. Swimming’s world governing body later banned all body-length swimwear.

But the minimal technology involved in running has evolved only gradually, said Burns. The last major changes, he said, came in the 1960s and ‘70s, when shoe manufacturers developed EVA-based foam midsoles and all-weather tracks began replacing cinder tracks.

N ike also is working on a fast shoe for the 100 meters. It’s called the Nike Air Zoom Viperfly and as of now will not be at the Olympics because its design does not meet the new World Athletics regulations. Nike is looking at ways to adjust the shoe so that it will comply with regulations, according to a person familiar with the discussion. The person spoke on condition of anonymity of the ongoing process since it’s not public.

Other companies are also pushing the boundaries of shoe technology.

Saucony has a carbon-plated shoe called the Endorphin Pro, which m arathoner Jared Ward wrote in a blog felt like the shoes were “pushing me forward into more of a half-marathon cadence.”

Joyciline Jepkosgei won the  women’s marathon in New York wearing an Adidas Adizero Pro prototype, which the company said in a statement conforms with the new rules. Adidas did not release details about the shoe’s technical design.

Hoka One One recently came out with the Carbon X, which was described as a cushioned, carbon-plated “speed machine” for a “propulsive, responsive ride.”

“We’re all fans of the sport,” said Colin Ingram, director of product for Hoka One One. “We’re all for (technology advances) as long as we’re able to do it within our own DNA when we decide to jump into the foray.”

For the moment, though, Nike appears to hold a sizable lead over any rival.

“I suspect they’re three years behind, minimum, and so it’ll take a long time before race results have any real integrity in a competitive sense,” sports scientist Ross Tucker wrote in an email. “It turned athletes from 2:06 to 2:04. It decided results. It changed the relationship between physiological input and performance outputs.”

Burns said a new era of advanced shoe technology could potentially disrupt the prevailing sponsorship model in running, in which shoe companies generally serve as the main sponsors of athletes. Burns said more athletes may look beyond shoe companies if a contract forces them to wear a shoe that puts them at a competitive disadvantage.

“If you have guys bringing knives to a gunfight, it’s not a good look for the knife sponsors,” Burns said.

American distance runner Roberta Groner doesn’t have a shoe deal and trains in a variety of brands, including a version of the Vaporfly. She could be wearing that model at the U.S. Olympic marathon trials in Atlanta later this month.