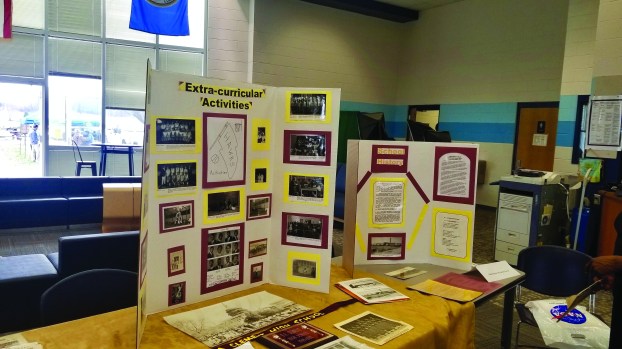 Carl Blankenship/Salisbury Post - Displays part of the exhibit on R.A. Clement School. The school was built in the twentieth century to serve African-American students. 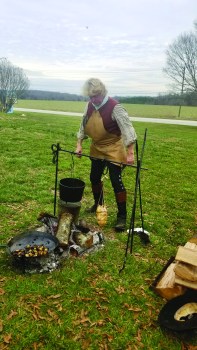 Carl Blankenship/Salisbury Post - Joe Ramsbotham changing out the hook for his chicken to place it closer to the fire.

The exhibits lining the school’s media center and part of its front lawn were for students who would be completing research projects that focus on local history. Students did not have to pick one of the topics being presented on. The displays and presenters were there to give them ideas.

“The goal here was to pick something from a variety of time periods,” said Assistant Principal Chris Walters. “We have colonial, civil war, around the turn of the century all the way up to the twentieth century.”

Rex Hovey, president of the Living History Association of Mecklenburg, was telling kids about the uniforms worn by North Carolina soldiers on both sides of the Civil War.

Hovey, who was dressed as a surgeon, Pointed out the only way to distinguish between a North Carolina Confederate or Union surgeon was the color of the overcoat they wore. Most officers in North Carolina wore the same navy blue for most pieces of their uniforms. Most of the confederate doctors were U.S. Army doctors before the war broke out.

The pieces of clothing had on display were period correct and made with traditional textiles, some by Hovey has been reenacting as a hobby since 1986.

Rachel Hunter is a West Rowan alumnae, but she transferred from R.A. Clement before schools in North Carolina were integrated. Hunter is a retired teacher, and she was running a booth on R.A. Clement’s history. The school building was the product of the Rosenwald Fund. The fund helped build more than 800 schools in N.C. for African-American students in the early part of the 20th century.

The exhibits Hunter set up outlined who was there, the teachers and principals, as well as school life, extracurriculars and so on.

When Hunter came to West Rowan as a student, she left a place where she was comfortable and suddenly found herself in the opposite environment.

“I never said I didn’t want to go to school, because I liked school,” Hunter said.

In her freshman year at West Rowan, she recalled having a math class where the teacher would leave students to work in groups. Everyone would work in groups for the class, except for Hunter. She was not invited to join any, but she could do the work by herself.

“People then were cowards,” Hunter said, adding she would hear people call out slurs and look around and see the other students acting like nothing had happened when she walked through the hallways.

Joe Ramsbotham was performing a bit of food living history by cooking a meal of carrots and chicken directly over a fire. Ramsbotham and his wife perform period correct food demonstrations and catering as well. This meal was something that may have been cooked over a fire during the Revolutionary War period.

The whole chicken was suspended on a piece of string hanging off  a hook, and Ramsbotham had to spin the chicken periodically so the bird would be cooked evenly over the hours long process. After years of doing this, Ramsbotham said he has gotten pretty good at cooking chicken this way.