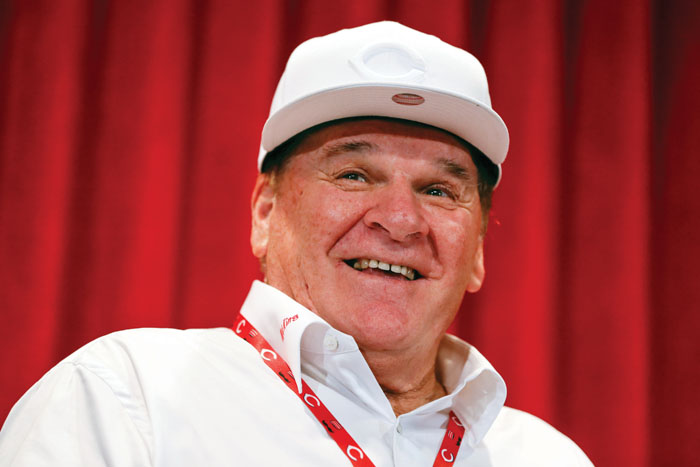 FILE - In this June 17, 2017, file photo, former Cincinnati Reds player Pete Rose attends a news conference during his statue dedication ceremonies before a baseball game between the Reds and the Los Angeles Dodgers in Cincinnati. Rose once again asked Major League Baseball to end his lifetime ban, saying the penalty is unfair compared with discipline for steroids use and electronic sign stealing. Rose's lawyers submitted the application Wednesday, Feb. 5, 2020, to baseball Commissioner Rob Manfred, who in December 2015 denied the previous request by the career hits leader. (AP Photo/John Minchillo, File)

Rose’s lawyers submitted the application Wednesday to baseball Commissioner Rob Manfred, who in December 2015 denied the previous request by the career hits leader.

“The time has come to recognize that Mr. Rose’s penalty has become grossly disproportionate relative to Major League Baseball’s treatment of severe wrongdoing by ownership, management and players,” the petition said.

Rose agreed to the lifetime ban in August 1989 after an investigation for MLB by lawyer John Dowd found that Rose placed numerous bets on the Cincinnati Reds to win from 1985-87 while playing for and managing the team.

“There has never been any allegation that Mr. Rose’s misconduct was intended to gain a competitive advantage over other teams,” stated the petition, which was first reported by ESPN. “When it comes to subsequent violations of Major League Baseball rules — namely steroid use and electronic sign stealing — this is clearly not the case. They have intentionally and dramatically affected the results of plays and games, including the outcomes of two consecutive World Series. These acts manifestly and deliberately violate the spirit and letter of the rules.”

Rose, who turns 79 in April, asked to meet with Manfred, who in his 2015 denial wrote that the 17-time All-Star had “not presented credible evidence of a reconfigured life either by an honest acceptance by him of his wrongdoing, so clearly established in the Dowd Report, or by a rigorous, self-aware and sustained program of avoidance by him of all the circumstances that led to his permanent ineligibility.”

Rose cited the joint drug agreement between MLB and the players’ association, which calls for 80-game suspensions for first offenders for performance-enhancing drugs, 162-game bans for second offenders and lifetime bans for thirds penalties with a chance for reinstatement. Manfred reinstated reliever Jenrry Mejia, the only player disciplined three times for PEDs under the major league drug program.

Rose also referenced Manfred’s decision on Jan. 13 to suspend Houston manager AJ Hinch and general manager Jeff Luhnow for one season for their role in the Astros’ use of electronics to steal catchers’ signs in 2017 and 2018 but to not discipline players.

“Proportionality has long been the governing norm when Major League Baseball commissioners have assessed discipline,” the petition said. “That guiding principle has not changed, but Major League Baseball’s reactions to potential threats to the integrity of the game have greatly evolved since Mr. Rose’s conduct resulted in a lifetime ban from the game in 1989, and more particularly since his 2015 petition for reinstatement.”

Rose also asked baseball’s Hall of Fame to remove the prohibition adopted by the Hall’s board of directors in 1991 to prohibit players on the permanently ineligible list from appearing on the Hall ballot of the Baseball Writers’ Association of America.

Rose also applied for reinstatement in September 1997 and met with Commissioner Bud Selig in November 2002, but Selig never ruled on Rose’s request.