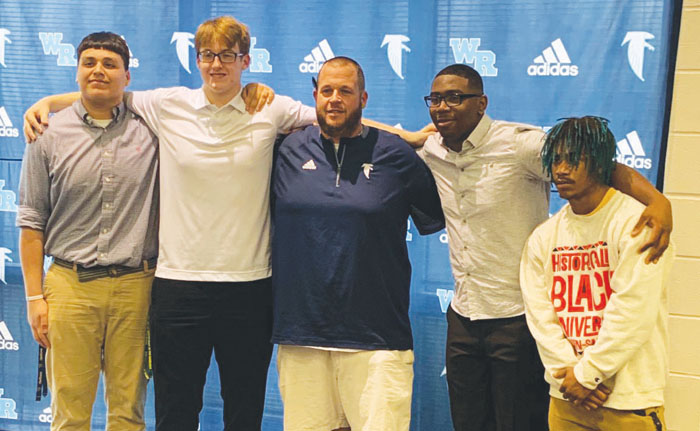 MOUNT ULLA — National signing day is always one of West Rowan head football coach Joe Nixon’s best days of the year because he gets it.

Signing day brings out the best in the former Catawba College Indian, brings out some of his most authoritative speeches.

Signing day, in the big picture is larger than the won-lost record, although Nixon was proud that this group helped West get to the third round of the 3A state playoffs twice during their careers.

“It’s important that you use the game (of football) instead of letting the game use you,” Nixon told the players. “Whatever happens with football, four or five years from now, walk out of there with a college degree. That’s what matters.”

All four Falcons on the stage held their own in the classroom — and then some. All four checked all the boxes as far as character.

If the grades and the character stuff aren’t positive, it doesn’t matter how fast an athlete runs the 40 or how much weight he can bench press. Grades and character are the first two things every college coach inquires about.

Nixon and his staff helped the four signees get to signing day, but mostly they helped themselves with offseason workouts and in-season production.

“You do what you’re supposed to do in the classroom and the weight room, you’ll have a chance,” Nixon said.

Jacobs wasn’t a household name, but he was All-Rowan County and All-North Piedmont Conference.

“When he came in here as a freshman, he was about 6 feet and 200 and looked just like a while lot of other guys,” Nixon said. “But he’s worked and worked and made himself one of the strongest players we had in the program.”

Jacobs is a high-effort, high-energy guy.

“The play that stood out for me this season was when a Statesville receiver caught a pass on the sideline and it looks like he’s going to go all the way,” Nixon said. “It was Levontae, our nose guard, that caught up with him on the 3-yard line and made the tackle, and we were able to keep them out of the end zone. He didn’t give up on that play, and I told him that’s the play he needed to start off his highlight film.”

Jacobs said Norfolk State has been following him for quite a while and came though with an offer recently. Norfolk State competes in the Mid-Eastern Athletic Conference at the D-I FCS level with schools such as N.C. A&T, N. C. Central and South Carolina State, Howard, Bethune-Cookman and Florida A&M.

“I really liked the school and the players and staff when I visited up there,” Jacobs said. “I could play defensive end, but they’re going to try to get me up to at least 280 and play me as a defensive tackle.”

The extra-polite Jacobs is the strong, silent type.

Houston’s amazing 2019 season in which he moved to running back in the fourth game and had 240 carries for 1,850  yards and 18 touchdowns has been well-documented. He was North Piedmont Conference Offensive Player of the Year and co-player of the year in Rowan County.

“He surprised everyone, including us,” Nixon said. “We knew he could make big plays, but he ran with amazing power between the tackles for someone his size.”

Houston came to the signing ceremony with an arm in a sling. He had labrum surgery after his 160-pound body took a beating in football, but he’s optimistic he’ll be fully healed for outdoor track and field season. He excels in the sprints and hurdles and probably is the fastest athlete in the county.

Before injuries shifted him to running back, he was one of the best receivers in county history with 118 career catches for 2,581 yards and 34 touchdowns.  He’ll return to the role of slot receiver with Winston-Salem State, and he could also be used on returns by the Rams.

“Winston-Salem State loved my speed,” Houston said. “They feel like I’m someone who can take it to the house at any time.”

Malcolm Gaither, a former West Rowan Falcon, is the receivers coach at Winston-Salem State, a D-II school that competes in the CIAA. That West connection was instrumental in Houston’s signing decision. Gaither handled the recruiting of Houston and made him a high priority.

“I was recruited by some other schools, but I’ve known for a long time it was going to be Winston-Salem State,” Houston said. “I knew that’s where I wanted to be. There are a lot of advantages to being close to home and it’s a good school and a good program.”

Berrios (6-5, 275) was landed by former Catawba head coach Chip Hester, who is putting together his second recruiting class at Barton. Barton will make its football debut on the field this fall, including a game at Catawba.

Berrios overcame more than most to get to Signing Day.

A broken femur (the big bone in the leg)  cost him a full season. Rods had to be inserted in a leg, and there were a long rehab process.

“It’s all kind of surreal to actually be signing,” Berrios said. “There were a lot of days when I didn’t think I’d get here. It took time to get my leg to work properly again.”

There also was a time when his weight soared to 350 pounds, but he transformed his body with disciplined workouts prior to a senior season in which he became a standout. His work at tackle was one of the reasons Houston ran for as many yards as he did.

Berrios was offered a full ride by Concord, a D-II school in West Virginia.

He won’t have quite a full ride to Barton, but with football money and academic money, Berrios says he’ll be able to go to the school in Wilson, N.C., “for close to nothing.”

“My dad ‘s advice was to go where I was going to be happiest,” Berrios said. “That was Barton.  I love Coach Hester and love the facilities Barton has. If you’re going D-II, it’s about as good as it gets.”

UMass is an independent but it competes in D-I FBS, the highest level of college football.

The 6-foot-5 Hassard was picked to play in the prestigious Shrine Bowl of the Carolinas contest and is the county’s best-known offensive lineman, but when he reported for Shrine Bowl practices in December, recruiting interest had been limited.

“I had one D-II offer and there I am practicing against a bunch of guys who are Power Five commits,” Hassard said. “I don’t want to sound cocky, but I was doing OK, holding my own.”

UMass saw that practice film and agreed with him. UMass was quick to act.

On the second day of Shrine Bowl practices, Hassard got a text from Nixon with the number of a UMass coach who wanted to talk to him. Nixon said he believed they were going to make an offer.

UMass? Hassard was as surprised as anyone, but he made the contact and he did get the offer.

UMass loved everything about Hassard, the frame, the long arms and the nimble feet. He’s not just a big guy, he’s a solid athlete who plays for West’s basketball team and moves with surprising agility.

He weighs 255 pounds now, but you’d probably guess 225 because he really appears long and lean.

UMass showed its interest by coming down to watch Hassard play basketball. Then Hassard flew up there for a recruiting visit last weekend.

“It was snowing, and snow was piled up all over the place,” Hassard said. “But I loved it.”

Nixon believes he’s the first Falcon to sign with a program at the FBS level since DB Domonique Noble inked with Georgia Tech in 2011.

Hassard is an obvious redshirt candidate for next season, but he’s got a frame that could be pumped up to 285 or 295 pounds after a year in the weight room.

He may have a very bright future.