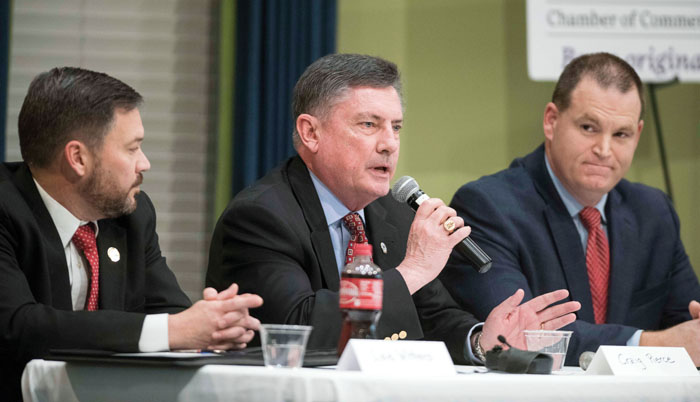 SALISBURY — Candidates for the Rowan County Board of Commissioners carried messages of uniting the county on an investment in education, safety and a bright future during a forum on Tuesday at Trinity Oaks.

Incumbent Rowan County commissioners Craig Pierce and Mike Caskey as well as challenger and former China Grove Mayor Lee Withers shared their thoughts on a variety of topics. The three candidates are vying for two open seats on the board, with early voting beginning next week and the Election Day on March 3.

Candidates addressed questions focusing on education and retention of young people in the county, possible safety measures after a shooting at Thelma’s Down Home Cooking and the board’s collaboration and investment in Rowan County’s public education institutions, including a $45 million bond referendum for an advanced technology center at the Rowan-Cabarrus Community College.

The $45 million bond referendum, which the board decided in December to place on the March 3 primary ballot, was the first topic discussed. Withers was the only one who definitively stated he planned to vote for the measure, citing education as his passion. Incumbents Pierce and Caskey also touted their support for such an investment, but both hesitated to take a stance for or against the measure and spoke about concerns relating to raising taxes to pay for debt incurred.

And while he vowed to follow the lead of voters, Pierce added, “What I do in the ballot box is my business.”

Candidates spoke optimistically about ongoing and future growth in the county, citing successes in infrastructure like the widening of Interstate 85. Training young people locally in hopes of retaining them was an issue all candidates agreed was critical.

Pierce suggested implementing training programs in high schools to prepare students to work after they graduate.

“We need to capture a lot of things and educate a lot more children that are coming out of these high schools with nothing but a diploma in their hand,” Pierce said. “They need to have training to be productive members of this community so that they’ll stay here and raise their families here.”

Caskey echoed the sentiment, saying the county is headed in the right direction but recognized room for improvement and the ability to be more agile in finding solutions.

Withers cited a personal experience of hiring and training people only for them to leave. He said it was also an issue relating to the Rowan-Salisbury School System and colleges

“We have to invest in our future to make sure that they’re going to hang around,” he said.

When asked about whether more capital funding should be allocated to the Rowan-Salisbury School System in addition to the $75 million commissioners have committed this fiscal year and next, Pierce said the schools should provide a longer-term plan for capital needs.

The issue of safety arose when candidates were asked how best to ensure a safe environment at West End Plaza following a shooting that injured a total of nine, including six who were shot, at Thelma’s last month. The county has already canceled the restaurant’s lease at the facility.

Caskey suggested adding more county offices and staff, commissioners’ original plan in purchasing the facility, and changing the environment, which would call for more security. He mentioned the county’s efforts to add more sheriff’s deputies and increase deputies’ pay.

Following up on the need for setting clear expectations, Withers said, “Rules are broken, contracts were written and bad people break laws. I don’t know that there’s anything the commissioner could have done differently.”

Pierce, however, advised against a “knee-jerk reaction,” calling the incident an unfortunate “one-time thing” at a time when West End Plaza was gaining a good reputation.

In addition to a message of uniting communities in Rowan County, candidates agreed that the community needs to believe in itself more.

“All of Rowan needs to be united,” Withers said. “This is our home, and it’s time we make it a place that everyone would be proud to live in.”

Caskey said things are finally moving in the right direction.

“If we could just get some steam behind us, I think we’re being looked at for a lot of new expansions … and I think the outlook is pretty good,” he said.

Pierce said he was looking forward to four more years on the Board of Commissioners, saying “let’s make this county what it should have been a long time ago.”