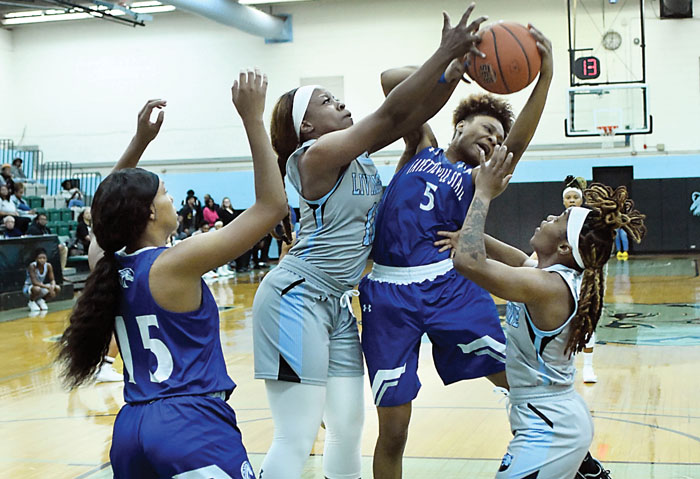 SALISBURY — It’s been a while since opportunity knocked this hard on surging Livingstone’s front door.

“It’s very much a missed opportunity,” first-year coach Chiante Wester said, moments after a 76-56 setback that snapped LC’s four-game winning streak. “And very disappointing. We just weren’t able to slow their pace. But hey, this game is over and we’ve got to start preparing for our next one.”

This one may have been over by halftime. Third-place Livingstone (11-11, 6-7 CIAA) had 15 turnovers in the first two quarters, helping up-tempo FSU (14-8, 11-2) charge to a 35-18 lead. “Fifteen unforced turnovers,” Wester emphasized. “There was no pressure on us. We were just over-passing and throwing it away, mostly because people weren’t where they were supposed to be.”

“We were kind of slow today,” added senior Daisa Harris said. “We wanted to get the ball in transition and try to run with them. We also wanted to rebound the ball and slow them down in transition, but none of that seemed to work.”

It did for the visiting Broncos, who shot 52.3 percent from the field in an 83-63 nod over the Blue Bears on Dec. 9. Last night, they converted 50.9 percent of their attempts from the floor, recorded assists on 18 of their 29 baskets and easily won their fifth straight game.

“For us, it’s about sharing the ball and getting the best available shot — versus taking hard, contested shots,” said winning coach Serena King-Coleman. “That’s what gives us an edge. We take high-percentage shots.”

No one took more of them than Fayetteville State senior Shantel Bennett, a 5-foot-7 guard who hit 11 of 17 from the field — and went 3-for-4 on 3-pointers — to finish with a game-high 25 points. FSU placed four scorers in double figures.

Harris — the CIAA’s reigning Player of the Week — paced Livingstone with 24 points, despite a subpar 9-for-25 shooting performance. Her only 3-ball drew the Blue Bears within 11-7 midway through the opening period. Wester called her a “three-level scorer,” and added: “When crunch-time comes, we want the ball in her hands.”

Teammate Victoria Onozie knows Harris is going to attract defensive attention. “Everyone is going to guard her tight,” she said. “What it means is everyone else has to step up and help with some of the scoring.”

Onozie did her part. The sophomore from Houston was a 10-gallon force in the paint, contributing 12 points and 16 rebounds. Teammate Darra Walker, Livingstone’s second-leading scorer this winter, was less spectacular. She was held scoreless in the first half and finished with nine points and no assists.

“(Walker) panicked a little bit tonight — and I don’t know why,” Wester said. “I looked at her several times and said, “Settle down, settle down.’ She wasn’t herself.”

Walker shot 3-for-10 from the floor, but thrilled the crowd with a couple of too-late-to-matter 3-pointers in the waning moments. By then the guests were comfortably ahead — and led by as much as 73-44 with 1:49 to play. Afterward, King-Coleman had no trouble identifying the game’s key factors.

Wester understands that. “When the better teams come in,” she said, “we’ve got to be better than this.”

NOTES: Livingstone was called for an administrative technical foul before the game started. Seems the red, LED lights that illuminate around the backboards after each quarter were not functioning. … Livingstone shot 19-for-61 (31.1 percent) from the field and was out-rebounded, 38-35. … FSU was not called for a personal foul in the first half. The Broncos have won nine of their last 10 tilts. … The Blue Bears jump from one pressure cooker to another when they host Virginia State on Monday.