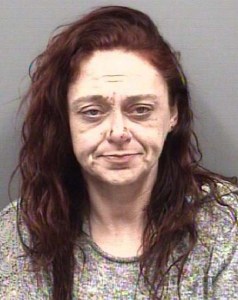 SALISBURY  — A Thomasville woman who was banned from a local convenience store now faces felony drug charges after she was found in possession of heroin, according to Salisbury Police Department reports.

Salisbury Police charged Julie Thayer, 39, of the 900 block of Culbreth Avenue, with one count of felony possession of a controlled substance schedule I, misdemeanor possession of drug paraphernalia and a misdemeanor outstanding Rowan County warrant for failure to appear on a driving while impaired charge.

Police received a call from Sheetz, located at 1520 S. Jake Alexander Blvd., regarding a woman who was previously banned from the store and was inside the bathroom. A police officer found two syringes filled with liquid. The liquid substance tested positive for heroin.

Thayer remains in the Rowan County Detention Center under an $8,500 secured bond.

• A woman reported on Monday someone stole items from her vehicle while it was parked in the 200 block of Carabelle Circle.

• A man reported on Monday he was the victim of credit card fraud while in the 100 block of Emerson Lane.

• State Employees Credit Union in China Grove reported on Jan. 31 that someone broke into a CashPoints ATM, located at 4195 West N.C. 152.

• A man reported on Jan. 31 that someone forced their way into his property located in the 100 block of Oslo Lane.

• A woman reported on Jan. 31 she was the victim of an assault while in the 200 block of Ervin Loop, China Grove.