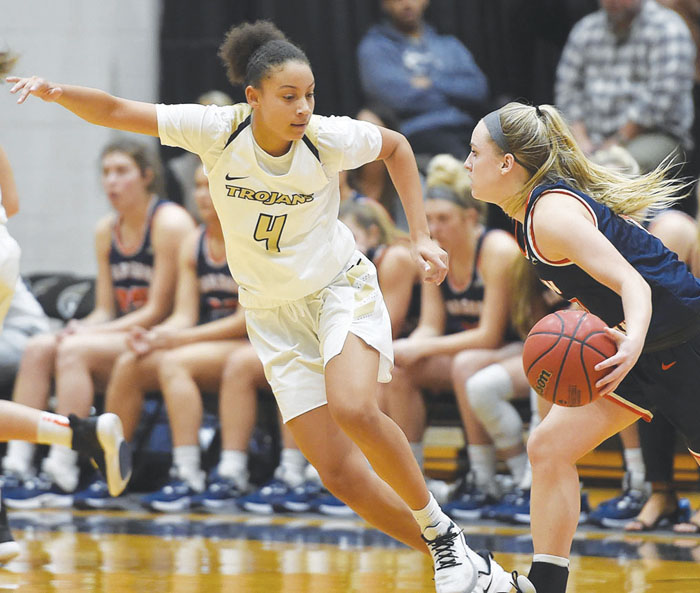 ANDERSON, S.C. —  Anderson University freshman McKenzie Gadson drilled a last-second shot on Saturday that may decide who prevails in the women’s basketball chase in the South Atlantic Conference.

It was an ironic swish that Gadson made from straight on and from at least 5 feet beyond the 3-point line for a stunning 102-100 victory at Carson-Newman’s Holt Fieldhouse.

Ironic because the one thing Gadson didn’t do well on a basketball court for coach Brooke Stouder’s Carson Cougars in high school was shoot 3-pointers (16-for-77 in four varsity seasons). But she’s one of those people who isn’t easily satisfied and constantly works on her weaknesses.

“Just a lot of shooting work in practice and after practice,” Gadson said. “I really have worked hard on my outside shooting. My teammates and coaches trust me to make shots.”

Anderson head coach Jonathon Barbaree explained that Gadson had a hitch in her shot when she arrived, but it’s been smoothed out.

“McKenzie is an athlete and she can get to the rim, so people have always sagged off her,” Barbaree said. “The next move, the counter for her was to become a more consistent shooter, and she’s done that. She works on our shooting gun a lot. She’s in the gym all the time, and a lot of that is on her own time.”

Catawba, Anderson’s SAC rival, and just up the road from Gadson’s home, tried hard to recruit her and offered her a scholarship early, but Gadson preferred to go away to college. Anderson spotted her at Elon’s camp and she ended up signing with the Trojans, who went 20-0 in the SAC last season. Anderson is almost three hours southwest of Salisbury.

Anderson is consistently good enough that not everyone believed Gadson could play for the Trojans, at least not right away. She’s a slim 5-foot-10 and got the bulk of her 1,474 points in high school on layups and free throws. She “out-athleted” ordinary high school players. She stole the ball a lot and jumped over people for stick-backs.

She played only seven minutes in Anderson’s exhibition at N.C. State, but when the regular season began a week later she was part of the starting lineup.

“I never dreamed going into my freshman season that I’d be a starter,” Gadson said. “I was hoping to play maybe five or 10 minutes a game. I just wanted to help. When I was a starter for our first game I was as surprised as anyone.”

Anderson has excellent offensive players, so Gadson’s role coming in was to be a defensive stopper, someone who could use her length to bother the shots of a quick scorer on the opposing team. She’s performed that role well. Her offense has been a bonus.  She averages 7.1 and 3.6 rebounds in 24 minutes per game and has started all 20 games for a 17-3 team that is ranked 20th in D-II.

“Anderson has turned out to be the perfect fit for me, not just on the basketball court, but academically,” Gadson said.

There’s a lot of bus travel in the SAC. There are also plenty of meetings and practices as well as games, but Gadson posted a 3.8 GPA for her first college semester.

“We’ve got a study hall that helps because I’ve been able to get a lot done there,” said Gadson, whose academic interests are science-oriented.

She plans a major in kinesiology.

On the court, she showed on Saturday that she can stay cool under pressure.

“The most exciting game I’ve ever been in,” Gadson said.

Down 100-99 with 3.4 seconds left in the second overtime period, Anderson was making the inbounds play from the side at midcourt. Anderson could have won with a two, so Makayla Green, who was making the pass, took several looks into the front court to see what was developing.

“Carson-Newman put a 6-3 post player on the ball and that made for some tough lines of sight,” Barbaree explained. “McKenzie was the third option on that play. Get the ball, slash, rip and go.”

Gadson had to hurry into the backcourt to get the ball. Green dumped it to her. She fumbled the ball for an instant. But once she got control, Gadson made three dribbles and confidently let it fly. Her aim was true and her third 3-pointer of the game proved decisive.

“What we were looking for on that play wasn’t open, so Makayla had to give it to me,” Gadson said. “I knew being in the backcourt with three seconds left that there wasn’t time for me to try to pass and let someone else take the shot. I had to shoot it, and so I did. I never thought I’d be shooting a shot like that or making a shot like that.  I’ll remember it because it was such a good game and such a big win to put us back in first place.”

Added Barbaree, “The pull-up jumper is one of McKenzie’s strengths, and she probably shoots the ball off the dribble as well as she does standing still. That game-decider on Saturday turned out to be a pull-up 3-pointer, but she looked very comfortable shooting it.”

Gadson’s 3-pointer and fist-pump — the most emotion Barbaree has seen from a very calm freshman — ended an extraordinary D-II struggle. Carson-Newman made 14 3-pointers and 22 of 26 free throws and still lost. Anderson shot nearly 50 percent and hit 13 3-pointers.

Gadson never would have gotten a chance to make that double-overtime swisher if she hadn’t make a four-point play in the first overtime.

Carson-Newman had trailed by as many as 16 points in regulation but had surged to a six-point lead with 1:40 left in the first OT. Gadson’s four-point play cut the deficit to two points.

“I got the ball in the corner on a skip pass and made a 3-pointer as I got fouled,” Gadson said.

Gadson scored a season-high 14 points on Saturday. She’s been scoring more lately, mostly because her 3-point shooting has picked up. She’s been pretty hot. She’s made nine of her last 14 3-point attempts. In Anderson’s recent loss at Catawba’s Goodman Gym, with a lot of her former Carson teammates watching, she scored 12 points and made two corner 3s.

Gadson says “the shot” that has gotten a lot of Twitter likes and looks, hasn’t changed her life.

She and twin sister Mikaila (who is running track for UNC Wilmington) have gone their separate ways in college, but they still talk often and share each other’s successes. There was a lot to discuss on Saturday.

“I’ve just got to stay focused and keep working,” Gadson said. “That’s why I’ve had some success —by working.”

Anderson leads Catawba by one game and is two up on Carson-Newman and Tusculum. Anderson hosts Newberry tonight. Catawba plays at Anderson on Feb. 26.