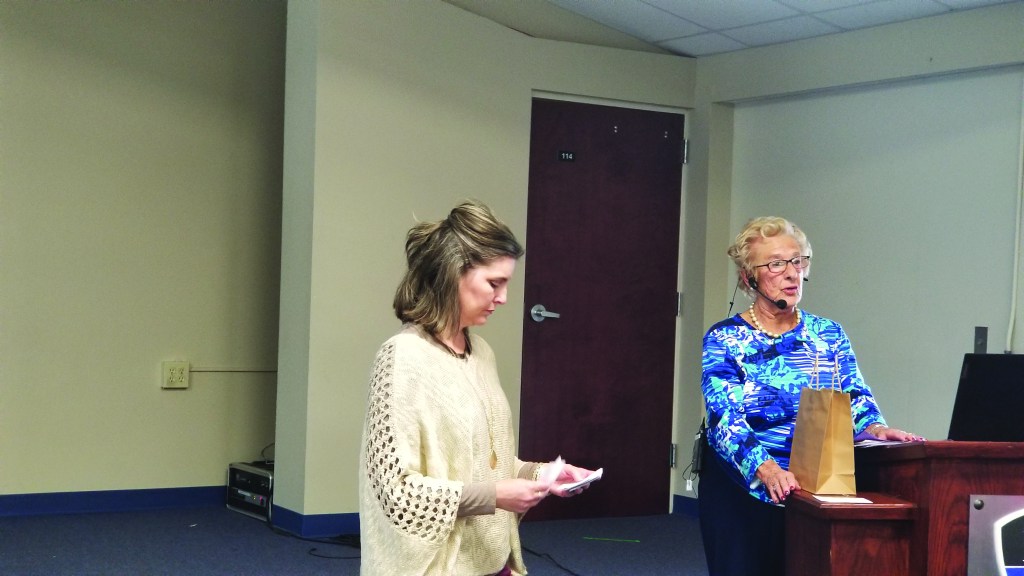 Carl Blankenship/Salisbury Post – Kindertransport survivor Margot Lobree (right) speaking to middle and high school students at NHCS on Monday. At this point she was taking questions which were submitted by students and ready by history teacher Sonja Davis. Davis is a history teacher at the school and organized the, as well as a mobile exhibit on Kindertransport, through the N.C. Council on the Holocaust.

SALISBURY – Margot Lobree, 94, was just a child when she was rescued from the horrors of the Holocaust by a rescue effort not normally taught in American schools.

Kindertransport, German for children’s transport, was a project of the United Kingdom in the lead up to World War II that removed about 10,000 children from Nazi-controlled territory. Lobree is a native of the German city Frankfurt and arrived in the United States some time after her rescue. She had relatives in New York.

She began living in North Carolina 11 years ago and giving talks around the state.

Schools, churches and others have all invited Lobree to talk about her experiences. She visited North Hills Christian School on Monday to speak to the middle and high school students. Before she came to North Carolina, she spoke to students in California.

“I feel gratified, especially if I get an audience that is really attentive,” she said. “And I speak to seniors if I can keep them awake.”

Lobree, who has given more of these talks than she can count, lost her mother, a grandmother and an aunt in the holocaust. She did not know what happened to her mother for decades. That was until Lobree and her brother found her mother’s name on a German holocaust memorial with 11,150 plaques with names of victims in 1996. They were in alphabetical order.

Lobree said she is afraid of renewed antisemitism in the world.

“It scares me,” Lobree said. “Because I know what can happen.”

Lobree is part of the N.C. Council on the Holocaust’s speaker program. The council is an agency of the N.C. Department of Public Instruction and maintains a network of speakers, resources and mobile exhibits which are available to schools and other groups that would like to host them.

Sonja Davis, the history teacher who organized the talk at North Hills through the council, also arranged to get the council’s mobile exhibit on Kindertransport for display in the common area for the school’s upper grade levels, which was coincidentally being housed at China Grove Middle School.

The exhibit, one of nine the council offers, is made up of panels covered in photos and firsthand accounts from the time that describe the rescue operation.

The students gathered to hear Lobree speak in the school chapel, at one point giving the survivor a standing ovation. After she was finished, they wrote questions that were passed to her to answer.

The experience has inspired Davis to bring more programs like this to the school. Her next goal is to bring another traveling exhibit that focuses on WWII and try to find a veteran that could speak to the students.

Davis said she has always felt in her teaching career she should attach people to lessons and honor them so students who are separated by generations can understand their experiences.