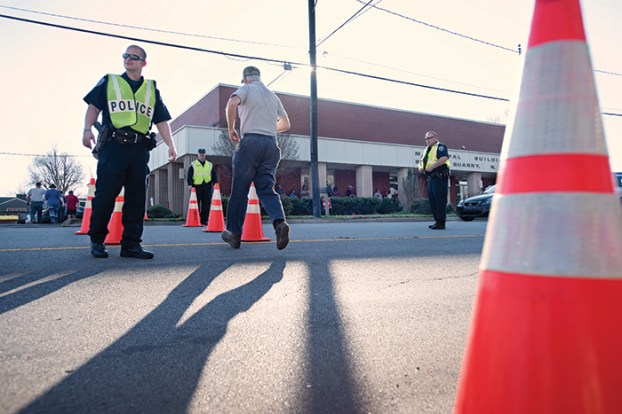 SALISBURY POST FILE PHOTO Police officers direct traffic so Rowan County voters can cross the street to wait in line and cast their votes at the Granite Quarry Municipal Building in Salisbury on Tuesday, March 15, 2016.

Editorial: Which ballot is most intriguing for unaffiliated votes?

Thousands of voters on March 3 in Rowan County will face a choice: Republican or Democrat.

As of Monday, there were 26,195 voters registered “unaffiliated” in Rowan County, giving them the ability to vote either ballot. The same voters could also choose an unaffiliated ballot, but the only item on it will be the Rowan-Cabarrus Community College’s $45 million bond referendum. And while it’s important, the bond referendum also appears on all other local ballots. Voters should maximize their voice by choosing the ballot they believe features the greatest number of interesting elections.

The most competitive local race is for county commissioner — where two incumbents are facing off against a challenger, Lee Withers, who has a shot at an upset. Withers is well-connected and has name recognition, especially in southern Rowan County. It will be far from an easy upset, though, as incumbents Mike Caskey and Craig Pierce are looking for their third term.

Combine the commissioners race with the bond referendum, and the GOP ballot looks to be the best option for voters looking for the most interesting local items.

The ballot also features a wide-open lieutenant governor’s race, with nine candidates seeking to replace Dan Forest, who is favored in his primary for governor.

The GOP ballot is also the only race that will give Republican-leaning unaffiliated a chance to vote for President Donald Trump. While some states have canceled their GOP primary, North Carolina’s will pit Trump against two longshot challengers — Joe Walsh and Bill Weld.

The Democratic ballot, however, is the most intriguing option for those more interested in national politics.

While Trump’s nomination is a foregone conclusion, the Democratic presidential primary result is not certain. Former Vice President Joe Biden remains the favorite, but his lead is much slimmer now than it was at the start of the race, with Vermont Sen. Bernie Sanders gaining ground of late. By the time March 3 arrives, the race could look much different than it does today.

The Democratic ticket will also feature a good race for lieutenant governor and a competitive race for U.S. Senate. Salisbury native Matt Leatherman is also running in the Democratic primary for N.C. Treasurer and has a good shot at winning the nomination. Constance Johnson, who made anti-semitic remarks about now-Councilman David Post after losing the 2015 Salisbury City Council election, is running for state superintendent of education.

The only local race on the Democratic Party primary ballot is for N.C. Senate District 33, with Tarsha Ellis facing Geoffrey Hoy. The race could end up being close, but both have said they plan to play nice in the election.

Unaffiliated voters will find good, competitive races on both ballots in the 2020 primary, but there are clear choices for those looking for the most hotly contested matchups. For statewide races, the intrigue is about even. On the local level, it’s the Republican ballot. For national politics, it’s the Democratic ballot.

The mass shooting at Thelma’s Down Home Cooking on Sunday, Jan 26 is a tragedy for any number of reasons.... read more