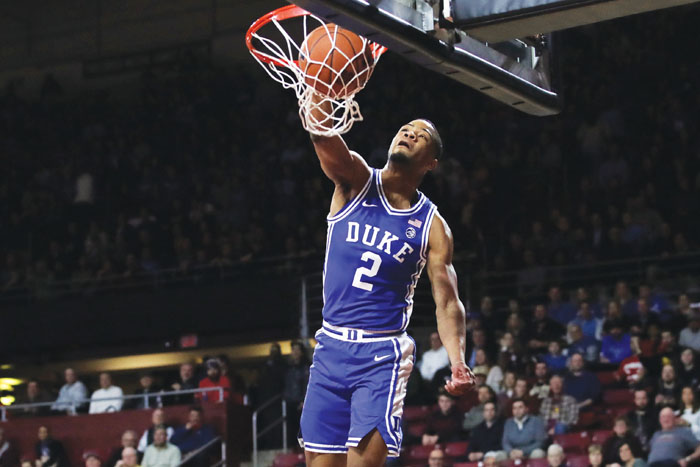 BOSTON (AP) — Duke coach Mike Krzyzewski thinks his players might have been looking ahead to this weekend’s game against North Carolina.

And it almost cost them.

“They didn’t listen to me,” he said on Tuesday night after the seventh-ranked Blue Devils rallied from a 10-point, first-half deficit to beat Boston College 63-55.

“It’s stupid not to listen. I’ve warned them two days about it,” said Krzyzewski, who earned his 500th career Atlantic Coast Conference victory. “I don’t look at that (upcoming games) because I’ve been beaten by human nature. We’ve won a lot of games, but I’ve had losses to human nature. That’s all I was telling them: ‘Take a look. … Louisville’s very good, and they were kicking their butt.’”

Vernon Carey Jr. had 17 points and 10 rebounds, making a layup and then two free throws with about six minutes left during a 10-0 run that gave Duke (19-3. 9-2 ACC) the lead for good. Tre Jones scored 14 of his 18 points in the second half to help the Blue Devils escape with their fourth straight win.

“We didn’t have the right mindset before the game,” Jones said. “We were focused on the game, but we weren’t hungry like we should be.”

Derryck Thornton scored 21 points and Steffon Mitchell had 12 rebounds for Boston College (11-12, 5-7), which lost by 39 points at Duke on Dec. 31 but was coming off a one-point win at North Carolina. But the Eagles went scoreless for more than four minutes down the stretch and missed seven of their last eight shots.

Krzyzewski, the all-time winningest coach in Division I basketball, improved to 500-200 in the ACC regular season and tournament.

But this one seemed to be headed in the other direction.

BC scored the first six points of the game and led 12-2 before Duke, which missed 10 straight shots, went on a 9-2 run. It was 16-11 when Cassius Stanley slammed in an alley-oop from Jack White. Then Wendell Moore made a jumper and Carey followed with a layup to give the Blue Devils their first lead of the game, 17-16, with just over six minutes left in the first half.

But the cold shooting continued — by both teams. Duke missed all 12 of its 3-point attempts in the first half; BC was 0 for 9.

It wasn’t until Nik Popovic — who had hit nine 3-pointers all season — made one with about 11 minutes left that the teams broke the slump. They had combined to miss their first 26.

Duke finished 1 for 15 from 3-point range and BC was 2 for 18. The made 3-pointer kept alive a long streak. The Blue Devils have made at least one 3 in 1,081 consecutive games, the second-longest active streak in the nation behind UNLV ‘s 1,092 games.

BC still led by four with eight minutes left and had a 49-46 lead when Duke scored the next 10 points to put the game away.

Celtics forwards Jayson Tatum and Grant Williams were at the game, as was Celtics boss Danny Ainge. Tatum, who went to Duke for one season, sat behind the Blue Devils’ bench in a Duke sweatshirt.

Orlando’s Amile Jefferson, who also went to Duke, and Mo Bamba were also at the game. The Magic play the Celtics on Wednesday night.

ATLANTA (AP) — Jose Alvarado tried to downplay his hot start for Georgia Tech, at least until he was reminded he outscored Virginia Tech in the first half.

Alvarado scored 20 points, including 19 in the first half, and Michael Devoe added 12 in his return from an injury to lead Georgia Tech to a 76-57 win over Virginia Tech on Tuesday night.

Thanks to Alvarado, the second half hardly mattered. Alvarado closed the first half with two 3-pointers, giving the Yellow Jackets a 38-18 lead at the break. The Hokies never challenged the lead.

, even when outscoring Georgia Tech 39-38 after halftime.

“I thought we did a better job in the second half but the damage was done,” said Virginia Tech coach Mike Young.

Alvarado has scored 20 or more points in three of his last four games for Georgia Tech (11-12, 5-7 Atlantic Coast Conference). He led the Yellow Jackets with six assists.

Coach Josh Pastner was happy with his team’s defense in perhaps Georgia Tech’s most complete game of the season.

“We’ve gotten better,” Pastner said. “We’ve improved each and every day since December. Unfortunately our record doesn’t showcase it.”

Devoe, the sophomore guard who leads Georgia Tech’ with his average of 16.2 points per game, returned after missing three games with a left foot injury.

“It was tough sitting out a couple games, but it was fun to be back,” Devoe said.

Alvarado flourished with Devoe after already picking up his scoring in the games Devoe missed.

“He’s stepping up a lot and stepped up a lot when I was gone, too,” Devoe said. “He’s playing real well and he’s got to continue playing that way.”

Alvarado scored four of Georgia Tech’s first five baskets and kept his scoring touch throughout the opening half. The junior made 8 of 9 shots from the field, including each of his three 3-pointers, in the first half. He missed his only three 3-pointers in a quiet second half.

“They were just making everything,” Radford said. “… Everything seemed to fall for them. We couldn’t stop that.”

It matched Georgia Tech’s biggest halftime lead of the season in an ACC game; the Yellow Jackets also led by 20 in a 96-83 win at North Carolina on Jan. 4.

The Yellow Jackets continued to add to their lead in the second half. Bubba Parham’s 3-pointer extended the lead to 30 points at 55-25.

Virginia Tech’s Landers Nolley scored 10 points in his return to Atlanta. Nolley led Atlanta’s Langston Hughes High School to two state championships. Nolley made only 4 of 14 shots from the field, including 1 of 9 3-pointers.

Virginia Tech: The Hokies struggled with poor shooting, especially on long-range shots. They made only four 3-pointers. The 18 points were not the Hokies’ low mark for an opening half this season. Virginia led Virginia Tech 30-17 at halftime of a 65-39 win on Jan. 4. The Hokies missed nine straight shots in the first half.

Young said the Hokies must play with “the energy that is required” to snap the losing streak. “When we’re rolling and we’ve rolled for much of this season we’re up on our toes and our shoulders are back and we’re engaged,” he said, adding “We’re back on our heels a little bit now.”

Virginia Tech: Returns home to play Boston College on Saturday after losing at the Eagles 61-56 on Jan. 25.

Duke: Has won 13 of the last 14 meetings between the schools. The exception: a BC victory over top-ranked and undefeated Duke at Conte Forum on Dec. 9, 2017.

Boston College: The Eagles were trying for their second win over a ranked team in a month and their first over a top 10 team since beating Duke in 2017-18.