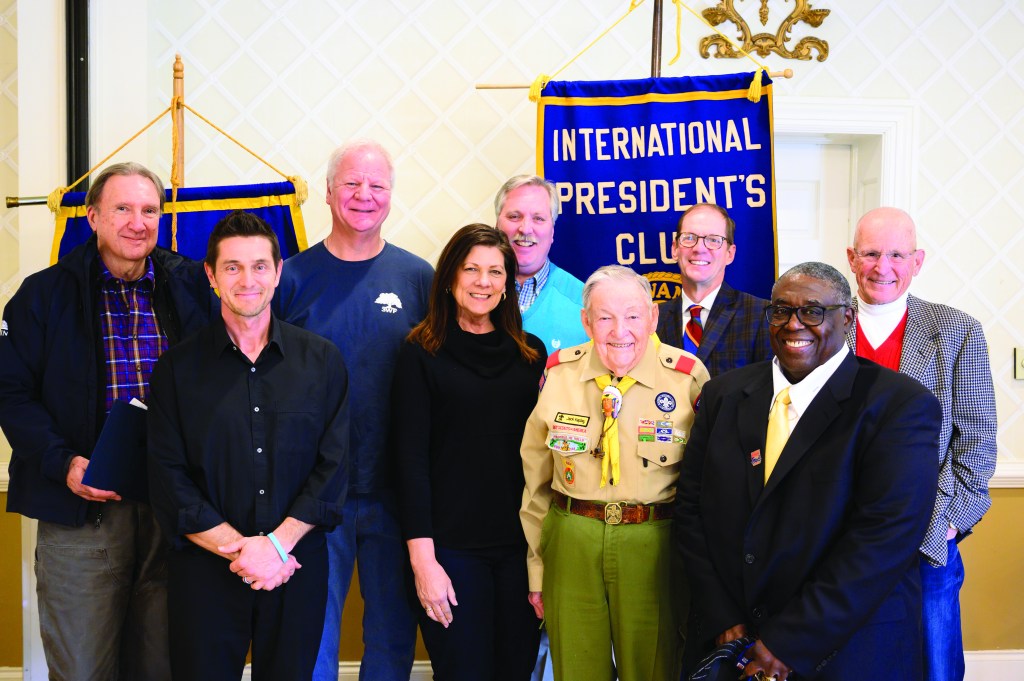 Josh Bergeron / Salisbury Post - The Salisbury Kiwanis Club on Friday presented 10 awards Friday to people who exemplify the organization’s motto of being an “organization of volunteers dedicated to improving the world, one child and one community at a time.” From left, are: Wylie Armstrong, Richard Reinholz, Donna Thomas, Steve Thomas, Glenn Taylor, Jack Kepley, Greg Alcorn, Robert Steele, and Bob Harris.

SALISBURY — To start its centennial celebration, the Salisbury Kiwanis Club on Friday presented 10 awards to people who exemplify its motto of being an “organization of volunteers dedicated to improving the world, one child and one community at a time.”

Those honored ranged from one of the club’s charter members to a track and field coach who’s been inducted into the N.C. High School Athletic Association Hall of Fame.

The club plans to present awards to a total of 100 people who exemplify its motto in advance of a November celebration.

Those presented with awards Friday included: 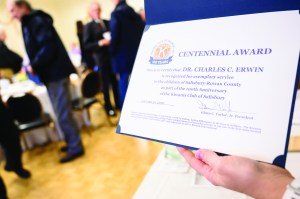 • Dr. Charles C. Erwin, who served as superintendent of Rowan County Schools during a period in which the system merged nine small, community high schools into North, South, East and West.

He was a leader in developing Rowan Technical Institute, now Rowan-Cabarrus Community College. He was on the community college’s first board of directors, a 55-year member of the Salisbury Kiwanis Club and a volunteer with the Boy Scouts and YMCA. He died in 1992 at the age of 93. Erwin Middle School is named in his honor.

• Charles Armstrong, a charter member of the Salisbury Kiwanis Club in the 1920s and longtime public health director.

Armstrong was also the Rowan County Health Director from 1919 to 1962 and was a champion for addressing children’s medical needs. He also provided leadership for the club to establish a health camp to treat children with tuberculosis. In a short time, the camp became such a success that children no longer needed the camp. Later called the Kiwanis Camp, it would also assist children with orthopedic defects. He died in 1968.

• Bob Harris, who has worked on mission projects with the presbyterian church; helped build hospitals, schools and homes in Africa, Belize and Brazil; and provided disaster relief following Hurricane Sandy in New Jersey.

Five years ago, Harris also began recruiting volunteers to work one hour per week with low-performing students at Overton elementary. For almost 10 years, Harris has invited young families to experience nature at his family’s farm near Marion with camping adventures.

• Robert Steele, who has coached a range of sports, most notably track and field, and produced a long list of champions.

Athletes he coached include 15 all-americans, 59 individual state champions, one high school athlete of the year in 1998, one national record holder in the triple jump and five national champions. While at North Rowan High School, his teams won 10 outdoor and five indoor state titles. He’s been named National High School Track and Field Coach of the Year three times and been inducted into the state’s athletic association hall of fame. The nomination submission said Steele “loves track and field, but he loves helping kids succeed and improve their situation even more.”

• Greg and Missy Alcorn, who are the founders of Apseed Early Childhood Education, which provides specialized e-readers to underprivileged children that get them ready for kindergarten.

As of January, the nonprofit had given away more than 6,000 tablets. This year, Apseed wants to distribute as many as 20,000 tablets. The organization started in Rowan and Davie counties. Now, it has expanded into Yadkin County and is working to move into the Chester County and Fort Mill City school districts in South Carolina. And in Davie County, Alcorn told the Post this month, the readers have directly led to an increase in student testing as they entered school. 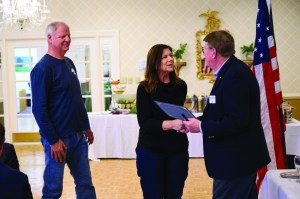 Josh Bergeron / Salisbury Post – Steve and Donna Thomas, who run the Three Wide Foundation, accept an award Friday from Rick Eldridge of the Salisbury Kiwanis Club. The club on Friday presented 10 awards to people who exemplify its motto of being an “organization of volunteers dedicated to improving the world, one child and one community at a time.”

• Donna and Steve Thomas, who started the nonprofit Three Wide Foundation, which helps local children in need by providing them with warm meals and warm coats.

Steve has served as a leader in his church, devotes his weekends to volunteering and coaching sports. A nomination letter said, “Steve has quite literally helped ‘build’ community.”

Donna has worked as a classroom teacher and evaluator for student needs. A nomination form for Thomas said “Donna has always held the well-being of children in the highest place in her heart.”

• Richard Reinholz, who works as director of the J.F. Hurley YMCA in Salisbury and is a member of the Salisbury Kiwanis Club.

He started his full-time career at the YMCA in 1999, when he became fitness director at the YMCA in southern Rowan County. That was followed by stints at YMCAs in Winston-Salem and Charlotte. He’s helped with “the daily mile” initiative, which asks schools to set aside 15 minutes of time for students to walk, run or jog per day. The goal, according to the Healthy Rowan coalition, is to improve the physical, emotional and social health of local children.

• Glenn Taylor, who is the current president of the Salisbury Kiwanis Club, has coached a number of youth sports and been active in service projects with the club.

• Jack Kepley, a longtime scout leader in the Salisbury and Rowan County area.

Kepley joined Boy Scouts in 1937. In that time, he’s been involved in the lives of more than 700 young men, 142 of whom attained the rank of Eagle Scout. He’s a World War II veteran and the oldest surviving charter member of the Harold B. Jarrett American Legion Post.

To nominate someone for a Kiwanis Centennial Award, visit bit.ly/SalisburyKiwanisClub and complete the nomination form.