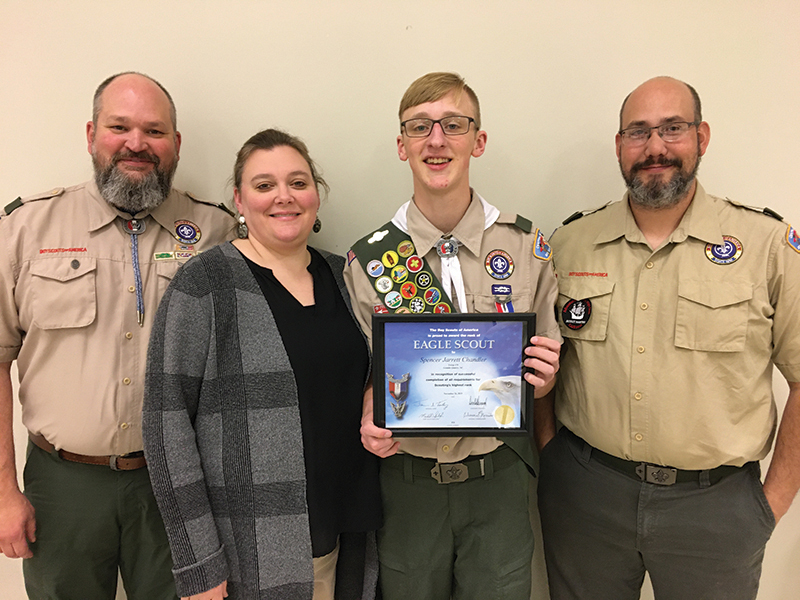 Troop 379 was first established in Granite Quarry in 1943 and was closed in 2006.  The troop was re-established in Fall, 2017.  Chandler helped to re-start the troop as Senior Patrol Leader.  Chandler is the Troop’s First Eagle Scout since re-chartering.  Chandler has 33 merit Badges and is a member of the local Order of the Arrow chapter.  He also earned the God and Me and the God and Family awards.  He received the Arrow of Light, the highest award in Cub Scouting.  Chandler was a Scout in Faith Troop 351 prior to helping re-establish Troop 379 at Shiloh Methodist.
Chandler’s Eagle Project was the complete renovation of the Basketball/Activity Court at Bostian Elementary School.  Spencer is a senior at Graystone Day School and also spends a great deal of time volunteering at First Baptist Church, Salisbury, where he is a member.  He has been on numerous national and international mission trips, served as a teacher in the annual Vacation Bible School, is a member of the church sound and projection team,  plays guitar and percussion in the church Praise Band, and volunteers for the church’s annual Living Christmas Tree services attended by thousands of people in the community.  Spencer won the 2020, First Place Service Above Self Award (in the High School age category) for his Volunteer activities.  This award is sponsored by Rowan United Way, the Rowan Rotary Club, Cheerwine, and Catawba College.