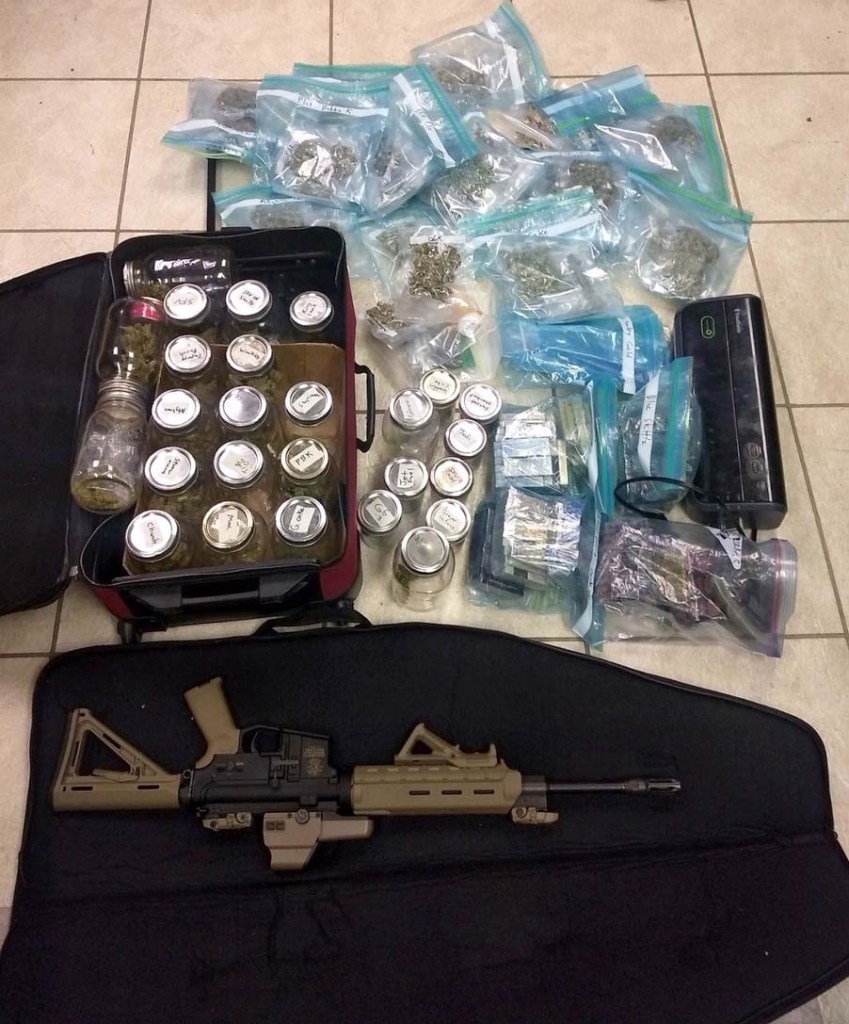 Rowan County investigators seized these packages of marijuana that were contained in Mason jars and this assault rifle at a Spencer home where they allege the owner, Michael Paul Miller, had a scheme to have packages of marijuana delivered via U.S. Postal Service from California to at least four NC addresses. Submitted photo

Miller was arrested on Thursday after he picked up a package that was delivered to a Salisbury home. Investigators with the Rowan County Sheriff’s Office and U.S. Postal Service responded to a tip from Salisbury-Rowan Crime Stoppers that a shipment of marijuana was being delivered to a residence in the 4500 block of U.S. 601, according to Capt. John Sifford.

Investigators established surveillance around the location and obtained a search warrant after the package was delivered.

A red 2014 Ford Fusion being driven by Miller arrived at the home while investigators were watching. Investigators saw Miller go inside the home, exit with the package and place it inside his vehicle, according to the statement.

Investigators blocked Miller as he was preparing to leave the residence and executed a search warrant. Ten packages of high-grade marijuana that weighed over 10 pounds was found and Miller was arrested.

Investigators seized an additional 4.4 pounds of high-grade marijuana, as well as 1,995 grams of THC vape pen cartridges, drug packaging paraphernalia and an AR-15 5.56 assault rifle. According to investigators, the total value of the marijuana and THC was over $60,000.

The investigation showed Miller had numerous packages of marijuana shipped from California to as many as four different North Carolina addresses. Miller has since been released under a $50,000 secured bond.

Miller was previously convicted in Rowan County of possession with intent to distribute marijuana and felony maintaining a dwelling/vehicle as well as numerous misdemeanor charges. As a convicted felon, it is illegal for Miller to possess firearms.

Investigators said additional charges are pending. This matter will be reviewed by the U.S. Attorney’s Office in the Middle District of North Carolina for possible federal prosecution, Sifford said.