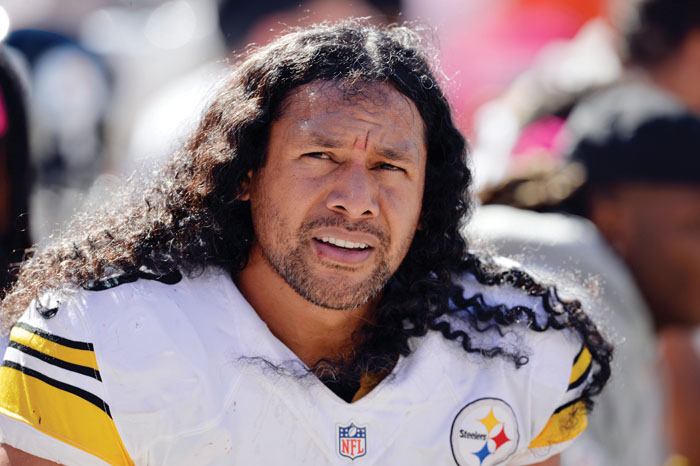 FILE - In this Oct. 12, 2014, file photo, Pittsburgh Steelers strong safety Troy Polamalu watches from the bench in the second quarter of an NFL football game against the Cleveland Brownsin Cleveland. First-time eligibles Reggie Wayne and Polamalu are among 15 finalists for the Pro Football Hall of Fame's modern-day 2020 class. (AP Photo/David Richard, File)

By EDDIE PELLS AP National Writer
MIAMI (AP) — He grew his hair so long, it flowed out of his helmet and obscured the name on the back of his jersey.
Didn’t matter. Everyone knew where to find Troy Polamalu on Sundays.
The Steelers great earned a spot in the Pro Football Hall of Fame along with another hard-hitting safety, Steve Atwater of Denver. Also voted in Saturday were receiver Isaac Bruce, running back Edgerrin James and guard Steve Hutchinson.
Polamalu said he went six or seven years, maybe longer, without cutting his hair during the prime of a career that lasted from 2003-14.
But as much as for the hair, he earned the nickname “Tasmanian Devil” for how he changed the way people thought about the safety position. Compact and fleet of foot at 5-foot-10 and 200 pounds, Polamalu bolted around the field, and made plays from practically anywhere. No quarterback, runner or receiver was safe.
Selected in his first year of eligibility, Polamalu was a four-time All-Pro, was voted to eight Pro Bowls and finished with two Super Bowl rings in three trips. His rambling, cross-the-field fourth-quarter pick-six against Joe Flacco in the 2008 AFC title game cemented the win and was a highlight of what might have been his best season; he had seven interceptions that year and the Steelers won the Super Bowl.
Polamalu will go in the same year as Pittsburgh coach Bill Cowher and defensive back Donnie Shell, each of whom were voted in as part of the hall’s special centennial class designed to celebrate the NFL”s 100th year.
“It’s a huge blessing to go in with Coach Cowher and a tremendous honor to go in with Donnie Shell because the Steelers’ defenses in the ’70s laid our foundation,” Polamalu said.
Though game-changing safeties were nothing new to the league, Polamalu could line up near the linebackers, or the defensive linemen, or deep in the backfield, and wreck a game plan from any of those spots.
“He’s waking people up to the impact a safety can have in today’s game,” another safety, John Lynch, said in an interview while Polamalu was in his prime.
Lynch, in Miami this week for the Super Bowl as GM of the 49ers, was also among the 15 finalists whose resumes were debated and discussed throughout the day by the panel of four dozen voters. But he did not make the cut. Neither did Tony Boselli, the dominant Jaguars offensive lineman whose career lasted only 91 games because of shoulder injuries. The Jaguars are still without a player in the hall.
An offensive lineman did make it, though. It was Steve Hutchinson, who played guard for the Seahawks, Vikings and Titans over a 12-year career. He’d been a finalist in all three years since becoming eligible and broke through in this, a class that didn’t include any slam dunks — or a single quarterback among the list of finalists.
“I’ve written the speech the past few years in the shower and it’ll really be about the people who helped me get here,” Hutchinson said.
Atwater made it — in his 16th year of eligibility, no less. — and became the first home-grown Broncos defender to join the hall. (An honor many in Denver believe should belong to Orange Crush linebacker Randy Gradishar.)
Atwater said when he got the much-anticipated knock on his hotel door “it was pretty obvious it wasn’t the maid so I was pretty excited. I’m extremely honored to go in with all these men.”
A two-time All-Pro who won two Super Bowls, Atwater prowled the backfield and delivered vicious hits to anyone coming across. One irony of Atwater’s late-recognized greatness is that many of his whiplash-inducing hits would be illegal in today’s NFL.
Though receivers were mostly at risk, it was his shoulder-to-shoulder disintegration of 250-pound Chiefs running back Christian Okyoe, “The Nigerian Nightmare,” while mic’d up on “Monday Night Football” in 1990 that truly put Atwater on the map.
James was a bastion of versatility and durability. A flashy first-round draft pick out of Miami, James made a name for himself with his ability to carve out room on the ground while playing in Peyton Manning’s offense with the Colts from 1999-2005.
James also played three seasons with the Cardinals and a half-year with the Seahawks.
“Started With Gold Teeth, Ended With a Gold Jacket,” James posted on social media after receiving the word.
James finished with more than 3,300 yards receiving and more than 12,000 yards rushing. He won the NFL rushing title in 1999 and 2000, no small thing given Manning was revving up his career at the time. James joins Colts wideout Marvin Harrison in the hall, which will give Manning more company next year when he’ll be a shoo-in to join them on his first ballot.
Bruce was a headliner in “The Greatest Show on Turf,” the pass-happy attack run by Hall of Fame quarterback Kurt Warner when the Rams were in St. Louis. This was Bruce’s sixth season of eligibility and his fourth time as a finalist.
His 15,208 yards receiving over 16 seasons were second in the NFL record book when he retired in 2009. But he was never selected an AP All-Pro, and some critics dismissed his stats as being more a sign of his longevity and the passing era he played in than any mark of true greatness.
No matter. He was elated. “St. Louis, we headed to Canton!” he tweeted.
There were no seniors announced Saturday, as they were folded into the centennial class. Others going in with that class, which was announced last month: Harold Carmichael, Alex Karras, Jim Covert, Bobby Dillon, Cliff Harris, Winston Hill, Duke Slater, Mac Speedie, Ed Sprinkle, along with coaches Jimmy Johnson, NFL commissioner Paul Tagliabue, the late NFL Films exec Steve Sabol and longtime GM George Young.
___
AP Pro Football Writer Rob Maaddi contributed to this report.
___
More AP NFL: https://apnews.com/NFL and https://twitter.com/AP_NFL