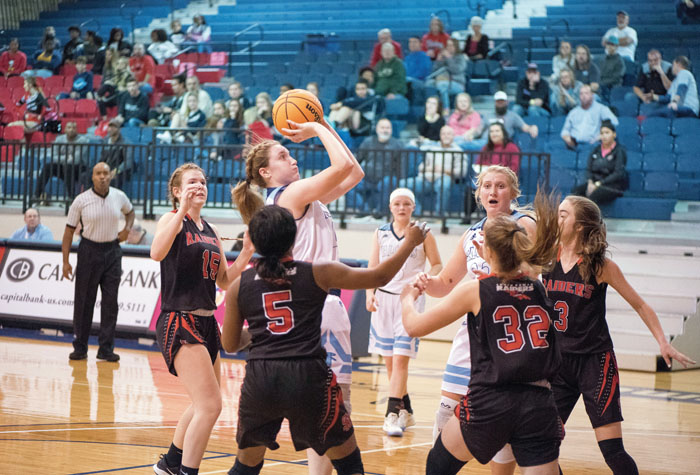 GRANITE QUARRY — West Rowan’s Abigail Wilson got in foul trouble, got shots altered and got shots blocked, but “The Machine,” as East Rowan girls coach Kevin Holland refers to her, never stopped coming.

The relentless UNC Asheville-bound senior scored 33 points, including the bucket that put West ahead in overtime, and the Falcons claimed an exhausting 58-51 win at East Rowan on Friday.

“It’s insane in this league,” East coach Kevin Holland said. “Of the four NPC games between the three of us, two have gone to overtime and no one has won yet on their home court.”

All those road wins are remarkable because there’s amazing crowd support for the home teams. East fed off a fireball of energy in Granite Quarry, erased an 18-point deficit and had a chance to win at the foul line late in regulation. East freshman Haley Dalton missed the free throw with eight seconds left that may have won the game, but she didn’t pout after West’s Whitley Arnott grabbed the rebound and the Falcons pushed the ball. She hustled back and disrupted Wilson’s layup with one second left to get the game to overtime.

In a special season,  West has won the Sam Moir Christmas Classic (which included Salisbury as well as the NPC’s big three) for major bragging rights. West also has managed to win NPC OT games in the gyms of its two fiercest rivals.

“We’ve talked about it all year, about the importance of having a lot of seniors,” drained West Rowan coach Ashley Poole said. “These girls have refused to lose. They’ve pulled together whenever the going gets tough.”

It was all West early. Wilson, who now has 2,034 career points and is the leading scorer in program history, was a tornado during her 14-point first quarter that pushed the Falcons to a 20-9 lead.

Wilson was making everything — including a banked-in 3-pointer — and fouls were piling up on the frustrated Mustangs, who couldn’t buy a bucket. Shot after shot by East danced tantalizingly across or around the rim.

“Abigail was a monster in that first quarter,” said Holland, shaking his head. “We did a little better against her after that.”

Wilson is such a dominant offensive player that it seems you’d commit two or even three people to keeping the ball out of her hands, but West’s supporting cast always seems to come through in big games. Gabby Blabon, Taylor Poole and Cindy Connolly made key 3s as the game unfolded, and an inspired Arnott, West’s center, was grabbing even more rebounds than Wilson.

“The keys for us are always senior leadership and good fundamental defense,” Arnott said. “Even when we got a big lead early in the game, we knew this wasn’t going to be easy.”

By the middle of the second quarter, the whistles were going the other way, and West players were getting exasperated. Neither team is very deep — West got zero points off the bench,while East got three — so foul trouble became the biggest reason for momentum swings. Led by Leah Hinceman and Grace Eagle, East finished the first half on an 11-2 surge that electrified the crowd. East trailed 33-24.

East’s roll continued as the second half got under way. The long-armed Dalton’s shot-blocking was a factor and the Mustangs were shooting a lot of free throws.

The third quarter ended with Arnott and Wilson both watching glumly  from the bench with four fouls. When East sophomore Mary Spry got the last bucket of the third quarter, East still trailed 40-36 but had all the momentum.

“Crazy game, for both sides it was just crazy,” Wilson said. “Our offense was flowing in the first half, but not in the second half. East fought back, so then we had to fight back.”

When Spry got the first two buckets of the fourth quarter, almost unchallenged in the paint, it was 40-all. The Mustangs had roared all the way back from 18 down. The gym exploded.

“Tale of two halves,” Holland said. “Defense is our strong suit and we played very good defense in the second half.”

With a little over six minutes remaining and West reeling, Taylor Poole made one of the bigger shots of her career. It was a 3-pointer from the left wing that put the Falcons back up 43-40. More than that, that shot bought another precious minute on the bench for Wilson and Arnott.

Spry made two free throws, but Poole struck again, this time a long two. With West up 45-42, Arnott returned to the floor with 5:19 left. Wilson was right behind her, and the Falcons’ five senior starters were ready for a fight to the finish line.

Wilson immediately put West up five, but Dalton and Hinceman, East’s tall freshmen, got the next four.

Poole made two clutch free throws for a 49-46 West lead. A flurry of mistakes and turnovers followed before East senior Adalie Harrison, quiet most of the night, made the colossal 3-pointer that made it 49-all. Both teams had their chances to break the deadlock, but that’s where regulation ended.

It was East that got hurt most by fouls as the game wound down, with Caroline Houpe and Dalton fouling out.

Wilson pump-faked and got loose and put the Falcons ahead quickly early in the overtime session. That was West’s only field goal of the four-minute extra period, but East never caught up.

Arnott blocked an East drive. Then Wilson made two free throws and Arnott made two more for a seven-point lead.

Eagle finally got East’s only bucket of the overtime, but Wilson finished things off with two more free throws.

“Games like that, there’s just an awful lot of pressure on the girls because they know that one play might decide it,” Holland said. “It was an awfully disappointing game for us to lose.”

Poole scored 10 for the Falcons.

Spry had 14 for the always balanced Mustangs, while Harrison, Eagle and Hinceman scored 10 each.

“Tough game,” added Hairston, who had about five spinning layups that just wouldn’t fall for her. “We fought hard. We just never put all the pieces together.”

Coach Poole managed a small smile as she emerged from the locker room.

“I guess we play good in overtime,” she said. “All I know is we have to keep moving. There are more tough games ahead.”