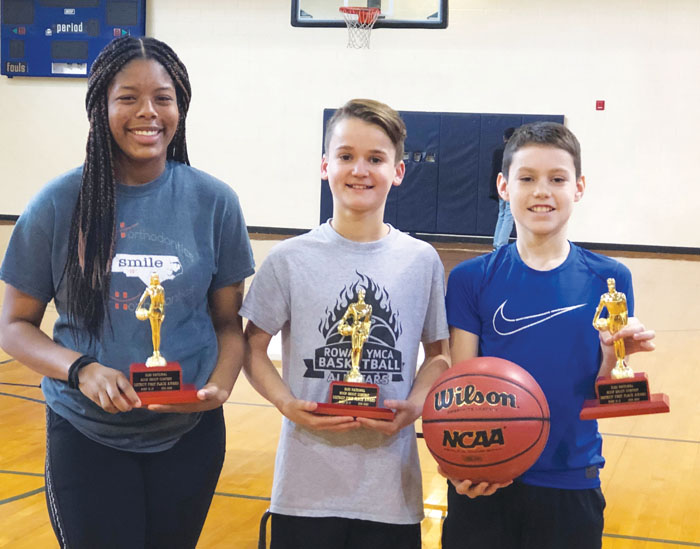 The three will represent Salisbury Elks Lodge #699 at the North Carolina Hoop Shoot contest on Feb. 8, at Grimsley High School in Greensboro.

Davis, a sixth-grader at Salisbury Academy, sank an impressive 23-of-25 free throws to outshoot five other competitors in the Boys 10-11 age group. A first-time participant, Davis admitted to feeling very nervous at the beginning of the event.

“The other guys were good shooters,” said Davis. “As I watched them, I tried to focus on making my own shots. Even if I missed, I knew I still had chances to come back and win.”

He only missed two baskets.

In addition to his parents, James and Andrea Davis, 12-year old Bryant said that he draws inspiration from Duke basketball and his favorite player, Stephen Curry, formerly of Davidson College and now in the NBA (Golden State Warriors).

In the boys 12-13 division, Sehr Spence connected on 22-of-25 free throws to take top honors in a field of six players. Spence attends Knox Middle School and has been playing basketball since he was 8 years old. Like Davis, it was his first experience with a district hoop shoot contest. But he kept his nerves in check too.

“I felt confident when I stepped up to the line,” said Spence. “I tried to ignore any
distractions and focus on making baskets.”

Dasia Elder, a student at North Rowan Middle School, was both surprised and
disappointed to be the only participant in the Girls 12-13 division. Per Hoop Shoot rules, she was still required to shoot 25 free throws.

“I think it’s tougher when you’re the only one competing,” said Elder. “All eyes are on you the whole time. I feel less pressure and more focused if other girls are shooting hoops too.”

It didn’t seem to bother Elder. She quickly sank 19-of-25 shots and looks forward to returning to the state contest, as she did in 2019. Elder gives credit to many people for her basketball success including Tom McDaniel from Salisbury Parks and Recreation, who got her started with the hoop shoot back in 2016.

“He encouraged me to do the local Hoop Shoot contest four years ago,” said Elder. “I’m thankful that he got me involved. It’s a lot of fun, and I can’t wait to get back to the state competition this year.”

In addition to Elder, Spence and Davis, Campbell Aron (girls 8-9) and Ryan McCoy (boys 8-9) represented Salisbury Elks #699 in the district event. But they came up short, battling six other shooters in their divisions.

Aron and McCoy are students at Salisbury Academy.

First-place winners from the state level will advance to the Elks Regional Competition in Frederick, Md., on March 14. The National Hoop Shoot finals are slated for April 16-19 in Chicago.