The China Grove Rotary meeting this week was extra special when the Club honored all public servants. Certificates recognizing Service Above Self were presented to Sergeant Jason Fox, China Grove’s Policeman of The Year and Fireman of the Year, Adam Wingler. 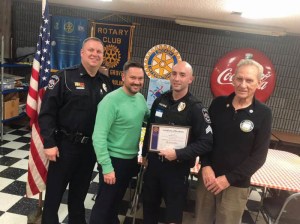 Club President-Elect and past China Grove Mayor Lee Withers introduced Chief of Police Andrew Deal who spoke on the value and uniqueness of his Department with emphasis on the value of Sergeant Fox to the Town of China Grove. He related that Fox is Field Training Officer, Instructor, Canine Unit Coordinator, and Governor’s Highway Safety Coordinator as well as holding several advanced law enforcement degrees and a Masters Degree. Sergeant Fox previously served as a member of the Kannapolis SWAT team and has been with China Grove for 3 years. Chief Deal mentioned wanting him to stay forever since he makes the town a safer and better place by keeping squad morale high. He further related that the China Grove police officers have an average of 10 years experience. Also three quarters of the CGPD have advanced law enforcement certification — a very high number in comparison with surrounding departments.. Fox was joined by his wife Tiffany and their three children, son Gabe, daughters Kali and Halle. 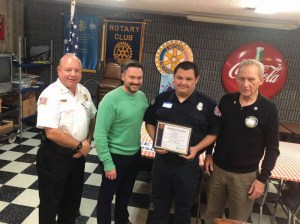 Withers then introduced China Grove Fire Chief Mike Zimmerman who related the value of Fireman of The Year Adam Wingler and together they presented Winger a Service Above Self certificate. Chief Zimmerman praised Fireman Wingler with being a quick learner & retaining new knowledge and skills, taking initiative, and being very mechanically minded. Fireman Wingler was nominated among his peers for Fireman of the Year and Chief Zimmerman let those present know there are 28 firemen on the roster including six full time. He is especially thankful of the camaraderie among neighboring fire departments and the genuine friendships among the firemen. Fireman Wingler, also an Emergency Medical Technician (EMT), is a Firefighter 102 graduate, and also a Rescue Technician. His girlfriend Megan Mills, also a volunteer fireman was present.

Club President Frank Jones along with program chair Lee Withers expressed that China Grove Rotarians are very grateful to have these brave people keeping us safe in our community. Withers expressed the hope that recognition of these special public servants inspires all to thank a public servant for their hard work and dedication so that we may continue to feel safe each day. Great job and WELL DONE to Sergeant Fox and Fireman Wingler.