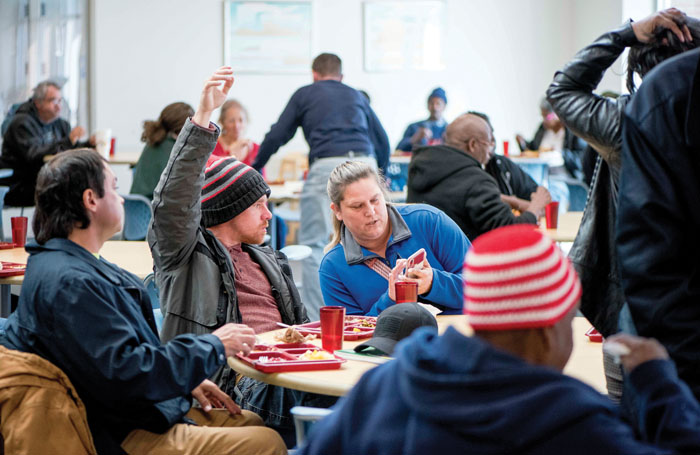 SALISBURY – Morris Phifer said he expected months ago to live in a home that’s being built for him in Concord.

But Phifer was among dozens of unsheltered individuals who sat down to eat lunch Thursday at Rowan Helping Ministries’ Jeannie’s Kitchen during the annual Point in Time homelessness count and survey.

Phifer, 59, is a partially disabled veteran who served in the Army for six years. He said he stays in Concord but visits the shelter for free meals.

The Point in Time count is performed each year to identify the number of homeless individuals living in Rowan County in an effort to receive funding and housing assistance for the unsheltered. The count began Wednesday night and continued on Thursday at the Rowan County Library and Jeannie’s Kitchen at the Rowan Helping Ministries.

An app called “Counting Us” is used to survey and pin-point an accurate location of homeless individuals during the count. Volunteers from the Rowan-Cabarrus Community College also assisted in the surveying at Jeannie’s Kitchen.

During the count, the conditions in which some individuals live “are not fit for humans,” said Kendra Coney, the housing coordinator for Rowan Helping Ministries. She added that observing the unsheltered “makes you want to help” them.

Eddie Jordan, 60, said he has lived under a bridge in the county for the last four years after losing his job at Cannon Mills when it closed in 2003.

Even so, the former West Rowan High football tight end said he relies on his faith to get through his days, sometimes praying with hands that are numb from the cold.

“God’s good to you,” he said, adding that he’s always tried to keep his head up and stay out of trouble.

Jordan said he’s grateful to have recently received Medicaid assistance and plans to file for disability.

Though the official count won’t be concluded until Feb. 6, Coney said the homeless count was up to more than 80 people on Thursday.

Some individuals have homes but visit the shelter to eat a free meal. June Jordan, 58, said he became homeless after his wife passed away in 2017 while he was in jail.

“I didn’t get to say goodbye,” June Jordan said.

But after being homeless for about a year, June Jordan said he now has a room to call home. He said it’s encouraging for others to share their stories because “you need to talk about it.”