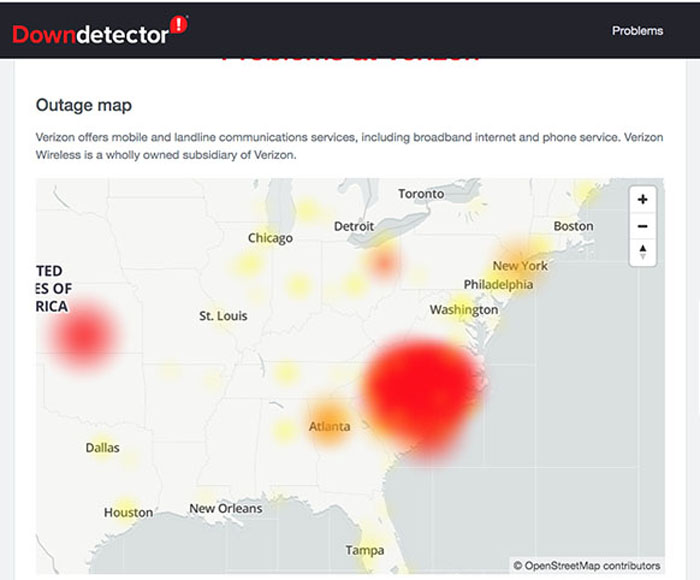 SALISBURY — Several mobile carriers experienced data and voice outages across North and South Carolina on Friday, according to Down Detector, an outage monitoring site.

The outages began mid-morning Friday and continued into the early afternoon for carriers that include Verizon, Sprint, T-Mobile, Straight Talk, Zelle and US Cellular.

Rowan Communications Director Allen Cress said he was made aware of the outages Friday morning. He said county staff were in communication with state officials, who said carriers were aware of it and had been working to resolve it.

As of late Friday evening, Cress said five towers were still experiencing issues out of 1,000 impacted sites. Those towers were in Raleigh and Greensboro.

The fiber lines carry information between cell sites and the core network in the area.

Jay said each of Verizon’s cell sites are connected to Verizon’s network via fiber optic cable. Verizon sometimes partners with other providers that already have fiber present to carry calls, text and data.

The disruption of service in the area was due to issues with Charter’s fiber network after it made the change, which was similar to a “virtual tree” falling across a line, said Emergency Management Division Chief T.J. Brown.

“The data didn’t know where to go after it left the cell tower,” Brown explained.

He said it appeared Charter didn’t realize the change would affect Verizon’s system.

He compared the outage to a power line going down.

“It’s an interesting thing. We really are dependent upon the physical lines to carry the signal. Almost all cell carriers will have to get onto a line to get to where they are going,” Brown said.