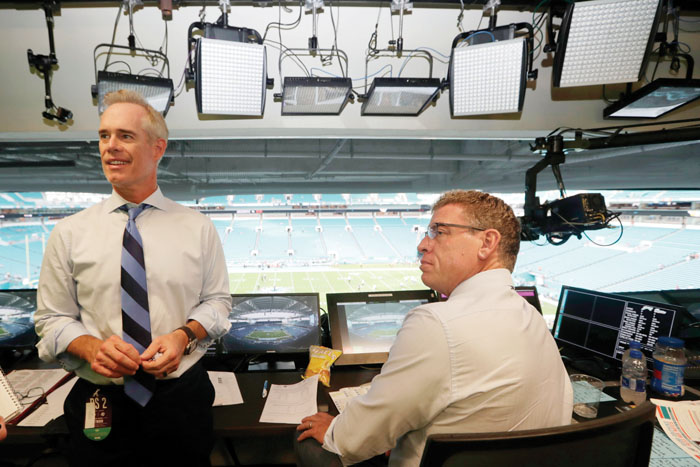 FILE - In this Aug. 23, 2019, file photo, Fox Sports play-by-play announcer Joe Buck, left, and analyst Troy Aikman, right, work in the broadcast booth before a preseason NFL football game between the Miami Dolphins and Jacksonville Jaguars in Miami Gardens, Fla. Chris Myers and Erin Andrews will be doing a little bit of everything on the sidelines for Fox's broadcast of Super Bowl 54. Not only will they be filing reports, but will be the eyes and ears for the production truck as well as Joe Buck and Troy Aikman in the booth. (AP Photo/Lynne Sladky, File)

By JOE REEDY AP Sports Writer
Ever since the Kansas City Chiefs qualified for Super Bowl 54, Joe Buck has been on a sentimental journey. It was 50 years ago that his father, Hall of Fame announcer Jack Buck, called his only Super Bowl on television when the Chiefs defeated the Minnesota Vikings.
But as Buck arrived in Miami this week to call the game for Fox, his focus was more on preparing for Sunday’s matchup between the Chiefs and San Francisco 49ers.
“It is a cool story for my family and I, but once kickoff happens it is about who is making the catch and tackling,” he said.
Joe Buck watched a restored telecast of Super Bowl 4 last week. The thing that struck him the most is that the game was part of what would be a transformative year for his father. Jack Buck took over as the top announcer for St. Louis Cardinals games in 1970 after Harry Caray was fired.
It also happened when Joe Buck was only 8 months old.
“My dad had a lot of life changes off and on the air. His career was about to take off and he was about to ascend to his signature job that gave him the impact that he had,” Joe Buck said.
Super Bowl 4 is also memorable because it elevated Chiefs coach Hank Stram to a popular figure after he was mic’d up by NFL Films. Stram became Jack Buck’s partner for “Monday Night Football” as well as 17 Super Bowls for CBS Radio.
Joe Buck forged a tight friendship with Stram as he accompanied his father on many trips.
“The NFL film of the Super Bowl was how he was 24 hours a day. That’s why watching it makes me laugh,” Buck said. “What made people love him is that he wore his emotions on his sleeve.”
Buck credits going to those games for his indoctrination into calling football, and it translates into the way he interacts with Troy Aikman during games.
“I don’t know if we have the room that they did on the radio as far as talking, but I think that natural back and forth where two people are listening and feeding off each other is when broadcasts are great,” he said.
With New England not in the Super Bowl for only the second time in the past six years, Buck is excited for this year’s matchup because it is new.
‘It feels like a fresh matchup. For as much hype as there already is, people are excited to watch. People ask who I like and my opinion changes often,” he said.
Another difference is that Fox’s top crew did not call many 49ers games. Buck/Aikman had only two San Francisco games, including the NFC championship. Despite that, Buck feels there is a lot of familiarity with the 49ers with their crew.
He also considers the biggest question going into the game is if Niners QB Jimmy Garropolo can make the decisive plays if needed.
“They haven’t needed him to so far. It is a multi-dimensional team,” he said.
Buck will be making history of his own this weekend. It is his sixth Super Bowl with Aikman, which is the most for an announcer/analyst pairing on one network. Pat Summerall and John Madden called eight Super Bowls: five on CBS and three on Fox.
Buck, Aikman and Cris Collinsworth became Fox’s top NFL team in 2002. The trio called Super Bowl 39 in Jacksonville before Collinsworth left for NBC in 2005.
“It is hard to believe we’ve been together for 18 years. Our first Super Bowl was in Florida (Jacksonville) and Andy Reid was one of the coaches,” he said. “When you truly enjoy each other as friends it comes out on the air. I know coming into the game that everyone is going to do well.”
___
More AP NFL: https://apnews.com/NFL and https://twitter.com/AP_NFL