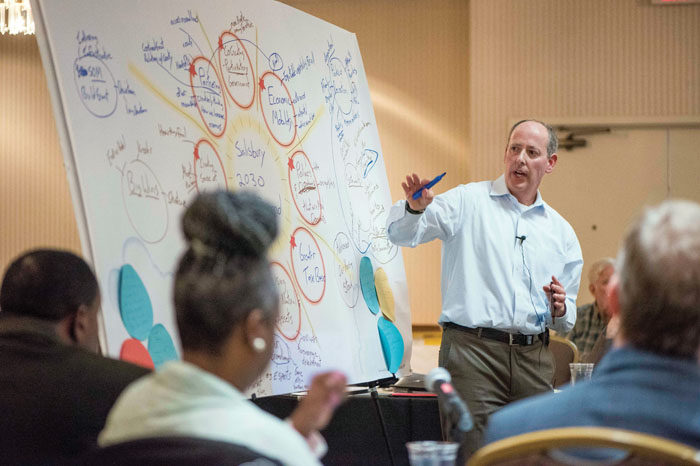 JON C. LAKEY/SALISBURY POST Moderator Warren Miller, from Fountainworks Facilitation and Management Consulting, took time on Thursday afternoon to pose questions to the city council members about what they as the elected leaders want to see Salisbury in the next 10 years. The annual City Council Retreatr is being held this week. City Council members and key city staffers gathered at the Livingstone College Event Center on Jake Alexander Blvd. Salisbury,North Carolina,1/30/20.

SALISBURY — Planning retreat Facilitator Warren Miller had a question for city council members: “What legacy do you hope to leave on council?”

On the first day of the retreat on Thursday at the Livingstone School of Hospitality and Culinary Arts, the council was tasked with visioning what Salisbury should look like in 2030.

Mayor Karen Alexander said she wanted to see economic mobility and opportunities from transit to housing without regard for socioeconomic status, race and gender.

Mayor Pro Tem Al Heggins said she would like to see the city create policies and ordinances that are “moral documents” and serve everyone. Heggins said she wants to build community wealth and for the council to be a participatory government and reflect the community.

Councilman David Post said he would like to see some “big wins” in the community. He listed off the Empire Hotel’s pending redevelopment project, progress on brownfield sites like Kesler Mill and a Main Street streetscape project. Post said he sees the Bell Tower Green Park and the Wallace Cancer Institute coming as “wins.”

Post also said he wants to continue the city’s “great relationship” with the county — one he said did not previously exist.

Council Member Tamara Sheffield said safety was her goal for the future — feeling safe, not just being safe through fire, police and utility services. As an example, she asked about the feeling people have when the live, work or visit Salisbury.

Council Member Brian Miller told the council and city staff he doesn’t think the city of Salisbury can sustain itself with the current tax base and that growing the tax base was neccesary.

Post said Salisbury needs to be do good at something that draws people to town. At one point, it was Food Lion, Post said. It could be the fiber-optic network formerly known as Fibrant, he said.

Sheffield agreed with Post, asking, “What are we going to be great at?”

Alexander said because of “some misfortunes” Fibrant “decimated” the city, but now Salisbury should take advantage of it. She spoke about hosting a E-Sports tournament since the city has the broadband capabilities and because Catawba College has a e-sports program.

Facilitator Warren Miller also asked the council members for their “wow” — something that they hope will happen. Sheffield held up a paper circle with a smiley face and replied “happy people.” Heggins followed, saying she wanted to see mitigated pockets of poverty. Alexander said she wants to see a happy, prosperous and fair community. Councilman Brian Miller repeated his desire for an increased tax base. Post said “a rising tide lifts all boats” to create a growing economy.

The retreat will continue today at 12 p.m. The council will learn about the building and facilities needs, get infrastructure updates, hear about the transit master plan and develop 2020 priorities.