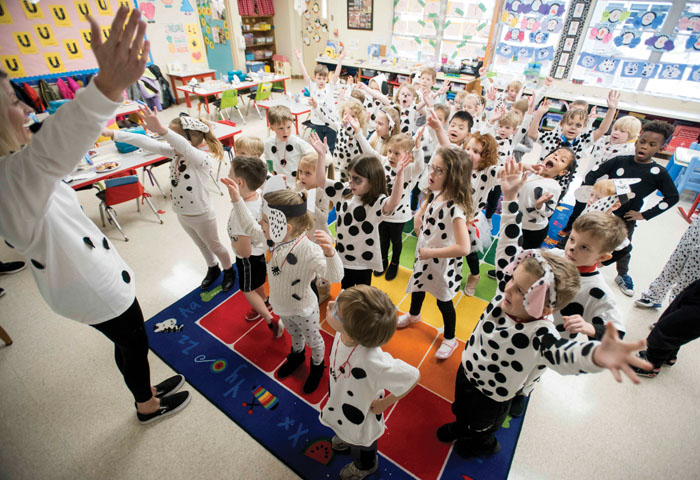 JON C. LAKEY/SALISBURY POST The preschoolers have a blessing for their snack while dressed as Dalmations. St. John's Lutheran Church Preschool celebrated their 101st day of school with a day long Dalmatian theme. Preschoolers wore their Dalmatian type clothing and created Dalmatian dog crafts and of course listed to reading of the book 101 Dalmatians. Salisbury,North Carolina,1/29/20.

SALISBURY – St. John’s Lutheran Church has had pre-kindergarten and kindergarten programs for decades and marks the 100th day of school with activities for kids that mesh learning with some fun celebrations.

This year, they did one better, waiting an extra day to work in a Dalmatian theme on Wednesday based on Dodie Smith’s 1956 novel “The Hundred and One Dalmatians,” and its Disney adaptations.

The kids all came dressed as the iconic spotted dog breed, with mixed media of spot applications to white shirts, some ears and so on. The day was filled with Dalmatian-themed activities like making Dalmatian slime, complete with spots.

The day was fun and games for the kids, but there was also a teaching opportunity built into the canine-themed festivities.

Kindergarten teacher Bonita Rowland said her favorite part of the day was seeing the kids’ excitement.

“Just seeing the imagination and being able to have the flexibility to do fun things with them,” Rowland said.

Rowland added that she does not think the kids necessarily realize they were learning as they were immersed in fun, hands on activities like counting snacks up to 100.

About half of the students in the pre-K program, which is for four year olds, move up to the kindergarten program at St. John’s. Some come from other pre-K programs. From there, students go on to a mix of public and private elementary schools.

The St. Johns program is unique because it is only a half-day, ending at noon.

“We do our basic learning of letters, numbers, sounds,” said pre-kindergarten teacher and director Teresa Stoner as her students made woofing sounds in the background.

The classrooms are next to each other and connected by a door. Walking from the pre-kindergarten to the kindergarten side, the one-year difference became evident in the level of detail in the art on the walls.

The kindergarten and the and pre-K kids interact during chapel time, when they go outside to play and during partner reading.

Stoner said pre-K kids are mostly reading picture books while the kindergarten students have moved on to readers.

The cost of Pre-K and Kindergarten through the church varies, with church members slightly less for tuition.