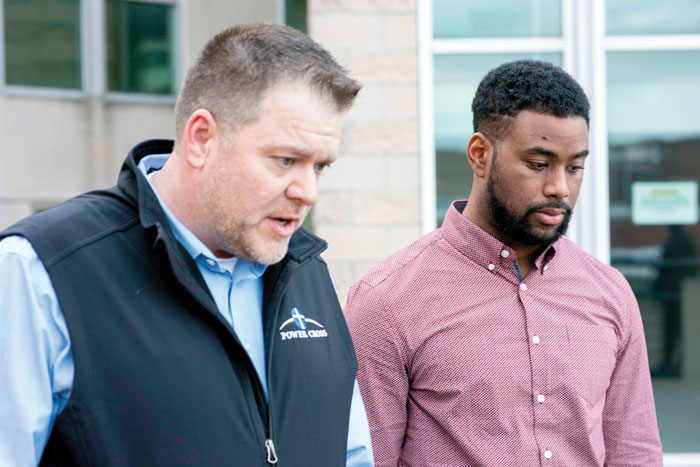 JON C. LAKEY/SALISBURY POST Power Cross Founder Jeff Storment (left) speaks after the trial for his coach Anthony Shegog. The trial for Power Cross Ministries coach Anthony Shegog, who has been accused of allowing one boy to beat up another while he watched, was held in Rowan County Court on Wednesday. The trial ended late on Wednesday afternoon with Judge Kevin Eddinger handed a verdict of not guilty on the charge of misdemeanor child abuse. Salisbury,North Carolina,1/29/20.

SALISBURY — At the close of a nearly two-hour nonjury trial, a Power Cross Ministries coach on Wednesday was found not guilty after being accused of watching and allowing a youth participant to be beaten up.

District Court Judge Kevin Eddinger told Coach Anthony Shegog that though he made a mistake in judgment, it did not rise to the level of a criminal act.

Power Cross is a Christian-based mentorship and ministry program that serves boys with a focus on sports and academics. Shegog was initially charged in November with misdemeanor child abuse.

Prosecutors brought additional assault charges against Shegog during a Dec. 11 court appearance. Judge Eddinger on Wednesday dismissed those additional charges of misdemeanor aid-abet simple assault and aid-abet assault on a child under 12.

The veteran law enforcement officer said a 10-year-old victim watched as a group of older boys began to fight. He didn’t want to get involved and did nothing, but that’s when Shegog allegedly tried to force him into talking.

The boy told the court Wednesday that he repeatedly told Shegog it wasn’t his business if other boys were fighting. The boy then said Shegog walked into an office with an 11-year-old boy who was also in the program.

This boy, who DeSantis said was much bigger than the victim, began punching the victim.

The prosecutor made unsuccessful attempts to show the court the video and instead played the video for the judge as he, the detective and defense attorney Ken Darty watched in the front of the courtroom.

The older boy, now 12, testified that Shegog told him to, “do what you need to do to get him to tell you what happened.” The boy said he thought that meant, “a little punch to the chest wouldn’t hurt.”

The boy said he punched the victim a couple of times and that the victim hit him back. In his testimony, the younger boy told the court he wasn’t injured, but that it did hurt “a little.”

When Shegog, who was somewhere just outside of the office at Power Cross, returned, the older boy had the younger boy pinned down, according to court testimony. Shegog then told the older boy to get off of the victim.

Shegog’s attorney Ken Darty said his client never told one youth to attack another. He said Shegog was trying to get to the bottom of what happened. Darty further said it didn’t make sense why his client would have encouraged the boys to fight and then demand the older one get off of the younger one.

“This was a person who was supervising these kids. This wasn’t violence on the football field,” Pittman said.

Judge Eddinger said the younger youth had the right not to be hit by a much larger child and that alleged details were “sadistic.”

“It is beyond egregious. It was a tremendous mistake to bring (the older boy whose name is being withheld by the Post) into this. These are little boys. (Older boy) had no business being brought into this at all,” Eddinger said.

Eddinger said the younger victim was hurt emotionally but that evidence did not prove without a reasonable doubt Shegog committed any criminal act.

Shegog declined to comment, but his attorney admitted that Judge Eddinger was right and it was a lapse in judgment on the part of his client.

“But I don’t think it rose to the level of a crime. Anthony is a wonderful young man. He is a Christian. He played football for Virginia Tech. He knows what it means to bring those kids together, to not separate them,” Darty said.

Power Cross Founder Jeff Storment said he was sorry that his employee had to face a trial over the incident.

“The first day that Power Cross came here, we came here because we read the newspaper and we saw all these innocent people being shot and our goal was to try to step in and offer some kids some hope,” Storment said. “Our goal at Power Cross, No. 1 is children’s safety and success. We want them to be successful when they get older with a foundation in Christ.”

He said there’s been a lot of negativity throughout the case but Power Cross kept doing the same thing they came to Salisbury for — pick up children, feed them, tutor them, give them athletic training and drive them home.

“They get a daily dose of discipleship in our coaches and Anthony Shegog is one of the best coaches I’ve ever had,” Storment said.

Kelly Hosch, mother of the young boy who was punched, said she didn’t feel as though Assistant District Attorney Pittman articulated himself well.

She said there was plenty of evidence that was not submitted, including a recording she provided.

If Coach Shegog isn’t responsible, she asked, who is?

“It seems to me that they gave the responsibility and supervision of my child to a 12-year-old,” Hosch said. “I trust the DA just like I trusted Power Cross and Coach Anthony. I trusted all of them and, in every direction, my son has been let down.”