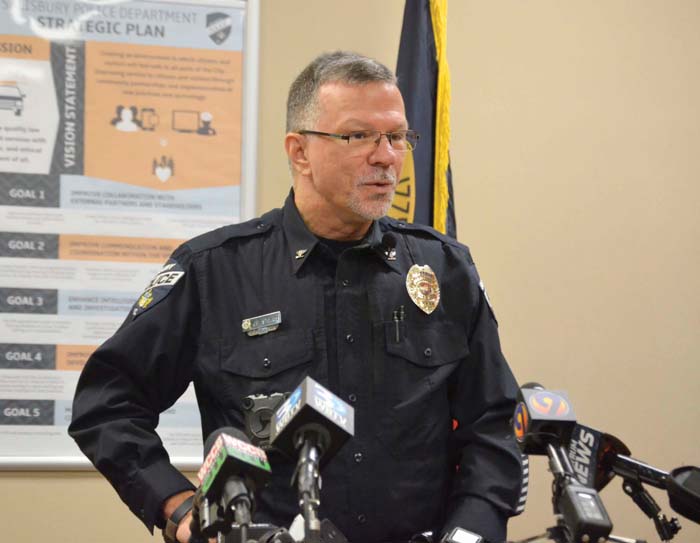 SALISBURY — A shooting incident early Sunday that resulted in six shot and others injured wasn’t the first time police were called to an after-hours party at Thelma’s Down Home Cooking.

In August, police responded to a disorderly crowd at the West End Plaza restaurant.

It appeared to law enforcement that the first party, held five months ago, was hosted by the same individual who organized the event resulting in Sunday’s mass shooting, Salisbury Police Chief Jerry Stokes said during a Thursday morning news conference. The police department held the news conference to review events of the past weekend, update the investigation and clarify information on what occurred prior to, during and since the incident, Stokes said.

On Aug. 24, a party at held at Thelma’s prompted police to respond to a disorderly crowd in the parking lot.

“We had some concerns about what might happen as far as some sort of dispute, but certainly had no knowledge or information that there was going to be a shooting that night,” Stokes said.

He said the most recent party was billed as a birthday party, but a flyer for the party indicated otherwise.

“Due to concerns about the prior incident, officers approached Thelma Luckey, the proprietor of the restaurant, on more than one occasion several days before the event, but the party proceeded as planned,” Stokes said.

The party host, Dhestini Sturdivant, requested and hired an off-duty Salisbury police officer to be on the property for the most recent party, with the officer starting at 9 p.m. Saturday. The party was scheduled to start at 10 p.m., and the officer met with Sturdivant and Luckey once he arrived.

The officer was primarily responsible for outside parking lot security and was to enter the building as needed. The officer also notified the on-duty sergeant of his presence at the event.

Stokes said there was a dispute between some people who tried to enter the building at the most recent party and the host had the officer come in. The officer requested additional personnel. The dispute was resolved and had nothing to do with the shooting.

Because of the ongoing nature of the investigation, Stokes said, he was unable to provide details about the motive in the shooting, the potential identity of the shooter and what type of weapon was used.

Stokes said they had already disseminated information to officers before the party because of the previous incident. He added that the on-duty officers developed a plan of action to ensure extra attention was devoted to the establishment. State Alcohol Law Enforcement were also on the scene and assisted police that night.