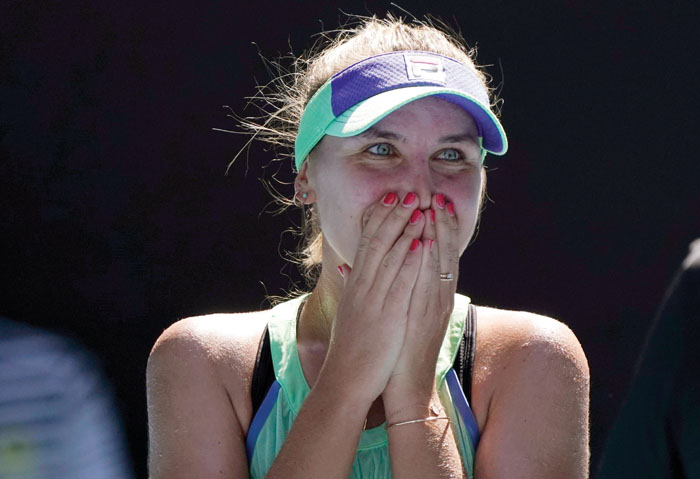 Sofia Kenin of the U.S. reacts as she is interviewed on court after defeating Australia's Ashleigh Barty in their semifinal match at the Australian Open tennis championship in Melbourne, Australia, Thursday, Jan. 30, 2020. (AP Photo/Lee Jin-man)

MELBOURNE, Australia (AP) — Sofia Kenin enjoys the bright lights and the big city, which is why she aspires to reside in Manhattan one day and perhaps explains why she is thriving on the Grand Slam stage right now.

“Maybe because of ‘Gossip Girl.’ … I love New York. I just love it there,” the 21-year-old American said. “Central Park. All of Fifth Avenue. All those shops. I’m a fancy girl. I like those shops, living the life.”

Kenin sure is at the center of it all at the Australian Open, where she will face two-time major champion and former No. 1 Garbiñe Muguruza in the final Saturday.

“I don’t want to be (on) defense against her. She can really put the ball away. She’s really aggressive,” Kenin said. “So I feel like it’s going to be who’s controlling the points more, who is dictating. Of course, defense is obviously going to help.”

This will be the 14th-seeded Kenin’s debut in a Slam title match; she never had been past the fourth round until now.

But her gritty and varied style carried her past 15-year-old star-in-the-making Coco Gauff and the top-seeded Ash Barty in Week 2 at Melbourne Park.

“You don’t experience this so often. Of course, I’m going to enjoy it. This is so exciting. Literally, butterflies,” said Kenin, whose words tumble out of her mouth as speedily as her legs carry her around a court. “I’m just going to also focus on what I need to do, focus on my game. I got here. It’s time to shine.”

She’s still just as precocious and self-believing as she was at age 7, when she told a TV interviewer in a video clip making the rounds on social media that she could return a serve from 2003 U.S. Open champion Andy Roddick.

“She’s extremely confident at the moment, as well,” Barty said.

Kenin began 2019 ranked No. 52 and with zero tour-level titles and finished it at No. 12 and with three singles trophies.

She says she thinks the biggest win of her career until now helped propel that surge: a third-round victory over Serena Williams at Roland Garros last May.

“They were cheering for Serena. She’s my idol. Winning that match really was a lot of emotions. After that, I felt like it took off,” Kenin said. “Yeah, things just started falling into place for me.”

Kenin is coached by her father, Alexander, who moved the family from Russia to Florida after Kenin was born.

Asked after the win over Barty how Kenin might handle her first appearance in a major final, Dad was honest.

“I don’t know,” he said. “Today was (her) first Grand Slam semifinal.”

Muguruza has been there, done that, in tennis: She is headed to her fourth Slam title match and is the only woman to beat each Williams sister at that stage, defeating Serena at the French Open in 2016 and Venus at Wimbledon in 2017.

“Doesn’t guarantee anything,” said Muguruza, whose shaky results over time dropped her out of the top 30 in the rankings, so she is unseeded at a major for the first time in a half-dozen years.

“At the end, the racket has to speak out there. Doesn’t matter how many Grand Slams you have,” said Muguruza, who beat another two-time major champ, Simona Halep, in the semifinals 7-6 (8), 7-5. “It’s a tennis match. Even if you have 15 Grand Slams, you go out there and you have somebody that can beat you.”

AUSTRALIAN OPEN HEATS UP, RIGHT IN IN TIME FOR SEMIFINALS

MELBOURNE, Australia (AP) — The temperature topped 100 degrees F (38 degrees Celsius) in the first of the Australian Open women’s semifinals and got slightly warmer in the second, when Garbiñe Muguruza and Simona Halep were going shot-for-shot in the hot-hot sun.

The sudden burst of heat got very, very close to triggering the top level of the tournament’s extreme heat policy, which means suspending play and closing the retractable roofs on the show courts and, more or less, making it indoors.

“Yes, it was very, very hot today and I felt it,” the fourth-seeded Halep said after losing 7-6 (8), 7-5, despite being a point away from winning both sets. “Killed me after the first set. The sun was strong. I didn’t like that much to play in this weather.”

On a scale of 1 to 5, with 5 meaning it’s mandatory for the roof to be closed, it reached 4.9 while Muguruza and Halep were playing on Thursday afternoon. The temperature edged up to 102 degrees F (39 degrees C).

“Conditions were tough out there,” Muguruza said, adding that she had primed herself to deal it.

Sofia Kenin grew up in Florida, and said she had no problem with the heat in her 7-6 (6), 7-5 semifinal win over top-ranked Ash Barty, an Aussie who is also used to the hot conditions. The so-called Heat Stress Reading — that scale from 1-5 — was on 4.3 when their match started.

Melbourne’s fickle weather regularly generates news during the season’s first major, but the start of the decade has brought some extremes.

Day 11 was by far the hottest so far in a tournament. Until then, relatively mild temperatures — in terms of the Australian summer, at least — followed a few rainy days. The rain — it was dirty red one day when the wet weather pushed through a dust storm — helped alleviate the terrible air quality that affected the qualifying tournament because of smoke from devastating bush fires to the north and east of Melbourne.

It’ll be a furnace Friday, with Australia’s Bureau of Meteorology forecasting temperatures in parts of Melbourne to hit 109 degrees F (43 degrees C) before a cooler change — possibly in time for the second men’s semifinal match between Dominic Thiem and Alexander Zverev.

The drought will extend another year for Aussies at the season-opening Grand Slam event.

Ash Barty doesn’t think hometown pressure was a factor in her semifinal loss to Sofia Kenin at the Australian Open.

The top-ranked Barty, who won the French Open last year after losing in the quarterfinals at Melbourne Park, had set points in both sets against the 21-year-old American, who was into the semifinals at a major for the first time.

“She played the biggest points well,” Barty said Friday. “Sofia came out and played aggressively on those points and deserved to win.

“I felt like I was scrapping and trying to find what I wanted to do best and came within a couple of points of winning the match. Yeah, sometimes it falls your way, sometimes it doesn’t. That’s just sport. That’s life.”

Barty, holding her weeks-old niece, Olivia, on her knee, acknowledged at a news conference there had been plenty of local attention on her run, the first by an Australian woman to the semifinals of the Australian Open since Wendy Turnbull in 1984. There hasn’t been a homegrown winner of the singles title since 1978.

“I’ve been in a Grand Slam semifinal before. Yes, it’s different at home. I enjoyed the experience,” Barty said. “I mean, if you would have told me three weeks ago that we would have won a tournament in Adelaide, made the semifinals of the Australian Open, I’d take that absolutely every single day.”

All the way back when she was 7, Sofia Kenin was trying to work out ways to compete with the top players in the world.

After advancing to her first Grand Slam final by beating top-ranked Ash Barty at the Australian Open, Kenin said she had been dreaming of this moment since she was a kid.

She made a passing reference to a  vide o posted by Tennis Channel of her talking about how to unpick former No. 1-ranked Andy Roddick’s weapon.

In it, a 7-year-old Kenin says the secret was in how to return his serve and explains how: “If I split, and then I turn around and hit my forehand with my short swing.”

Kenin, who was born in Moscow in 1998 and moved to Florida as a baby, was a child when Roddick won the U.S. Open in 2003. He also reached four other Grand Slam finals.

“I think everyone knows about it. I’m doing an interview thing, I can return his serve, how I will return it,” the 21-year-old American said. “By the way, he tweeted something about me. He said congratulations and stuff, so … Thank you, Andy.”

Novak Djokovic had just reached a record eighth Australian Open final when he was asked why it seemed to be only long-retired players who were leading the campaign to have Margaret Court Arena renamed.

It has been a contentious issue at Melbourne Park because of Court’s controversial comments on homosexuality and gay marriage. Djokovic didn’t take sides.

John McEnroe and Martina Navratilova this week unfurled a sign on the court asking it to be renamed in honor of Evonne Goolagong. They later apologized for breaching tournament protocol, but not for their campaign.

Djokovic said he had seen the photo of McEnroe and Navratilova with the banner but wasn’t well-enough informed about their protest to make a judgement. He also said he understood that people were hurt by comments from the 77-year-old Court, who became a religious minister after winning an all-time record 24 Grand Slam singles titles.

“Margaret is a huge champion, a tennis hero in Australia, and also around the world. One of the most important tennis players in the history of women’s game,” Djokovic said. “Of course, when she says something like that, it has a huge impact.

“I don’t support … what she said. I don’t think it was the right thing to say. But she probably has her reasons and we have to respect that she has a difference in opinion. That’s all there is to it.”