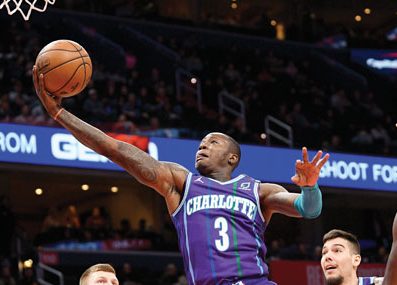 By RICH DUBROFF Associated Press
WASHINGTON (AP) — Shortly before his Washington Wizards played the Charlotte Hornets, Bradley Beal found out he’d been snubbed for the All-Star Game.
Playing with an obvious chip on his shoulder, Beal — who averages 28.6 points per game, sixth in the league — had 34 points, nine rebounds and nine assists to lead the Wizards past the Hornets 121-107 on Thursday night.
Beal had been an All-Star the previous two seasons. He is usually quick to talk after games, win or loss, but was miffed enough about his omission that he left the locker room before it was open to reporters.
He was 6 for 12 from 3-point range, including a 3 in the middle of a 13-0 run that gave Washington an 82-74 lead with 1:41 to play in the third quarter. Beal also made 14 of 15 from the free-throw line and scored more than 30 for the fifth straight game.
“He’s an All-Star,” Washington coach Scott Brooks said. “He just did not get picked.”
Miles Bridges led Charlotte with 23 points. Terry Rozier had 21. The Hornets have lost nine of 10 and 15 of 18.
Thomas Bryant scored 21 points, Isaiah Thomas had 18 and Troy Brown Jr. scored 12 for Washington, which began a six-game homestand.
Thomas, who has twice been an All-Star, voiced his displeasure with the selection process.
“Even though they didn’t name him an All-Star, he’s an All-Star,” Thomas said “It’s so political. The NBA picks who they want, and that’s just how it’s always going to be. We have no (national) TV games. …
“There’s a few people on there that shouldn’t be on there, and we know that.”
TIP-INS
Hornets: Just two of their wins have come against teams that are above .500. … Scored 107 points against Washington, which allowed 303 points combined in its previous two games. … F P.J. Washington, who had 15 points, left in the third quarter with a sprained right ankle.
Wizards: F Rui Hachimura, who hasn’t played for the last 22 games with a groin injury, could play Saturday against Brooklyn, Brooks said. “I don’t know if he’s going to start right away,” Brooks said. “If things keep going well, the way (they) have been, there’s a great chance.” Brooks will make a decision after Friday’s practice. … C Moe Wagner, who hasn’t played since Dec. 10 with a sprained left ankle, could return sometime next week, Brooks said. … F Davis Bertans was assessed a technical foul in the third quarter. … Beal was also called for a technical late in the fourth quarter.
DEFENDING BEAL
Charlotte coach James Borrego noted that Beal had 36 free throws in his previous two games, and he wasn’t pleased that Beal shot 15 more.
“You’ve got to be smart,” Borrego said. “You’ve got to be physical but you still got to be smart. Show your hands. You have to give him credit but we got to do a better job defending without fouling.”
Beal had just two field goal attempts in the fourth quarter, and Bridges was frustrated with trying to guard him.
“It’s hard but that’s why I’m here in the NBA, to do that,” Bridges said. “It’s my job. Unfortunately we didn’t win the game but I think I did a pretty good job in the fourth quarter.”
HONORING KOBE
This was the Wizards’ first home game since the death of Kobe Bryant, his daughter and seven others in a helicopter crash on Sunday. A video tribute was played, followed by 24 seconds of silence. Washington committed an intentional 8-second backcourt violation and Charlotte had a 24-second violation to begin the game in honor of the two numbers Bryant wore with the Los Angeles Lakers.
Thomas Bryant, who began his career with the Lakers, is proud to share the last name of his childhood hero.
“I used to wear the No. 8 jersey all the time when I was younger, going to my dad’s house. My dad had to force it off me because it had syrup stains and everything from eating. I never took it off,” Bryant said. “Just talking about today, it feels special.”
UP NEXT
Hornets: At San Antonio on Saturday.
Wizards: Host Brooklyn on Saturday.
___
More AP NBA: https://apnews.com/NBA and https://twitter.com/AP_Sports