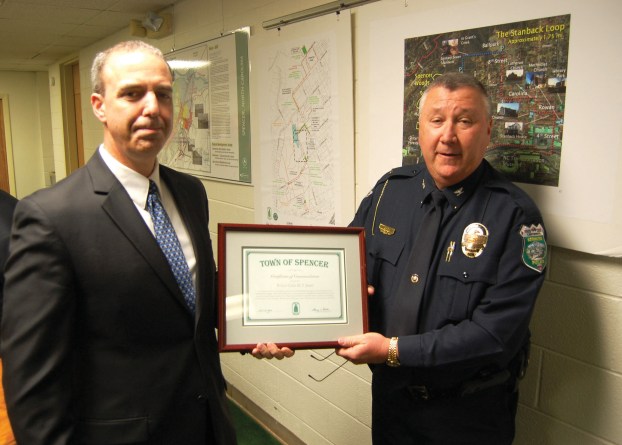 Spencer Police Chief Mike James, right, accepts a plaque of commendation from Town Manager Larry Smith during Tuesday's Board of Aldermen meeting. Smith praised James for his efforts to reduce crime in the town.

GRANITE QUARRY – The town board is eyeing interim Town Manager Larry Smith for the permanent job.

After coming out of closed session during a special meeting on Jan. 21, the town Board of Aldermen unanimously passed a motion to enter contract negotiations with Smith for permanent appointment to the position.

Smith declined to comment Tuesday, citing ethical standards for public officials who are serving in an interim positions.

Smith was appointed interim town manager in 2019. Hiring a permanent manager was pointed to as one of the first orders of business by some aldermen after municipal elections in November.

Former manager Phil Conrad stepped down on Feb. 11 last year, citing not having enough time to do the manager job along with his other responsibilities as the director and transportation planner for the Cabarrus-Rowan Metropolitan Planning Organization.

Conrad spent three years as town manager. Before him, Justin Price had a brief stint as manager before resigning in January of 2015 after taking over for Dan Peters, who retired in 2014.

The board cancelled a special meeting scheduled for today. The only item on the meeting’s agenda was to enter closed session to discuss an employment contract.

Smith said the meeting was cancelled due to a scheduling conflict with some of the aldermen.

Smith had been brought up by the board as a permanent option in 2019 as well, when his contract was extended to the end of that year.