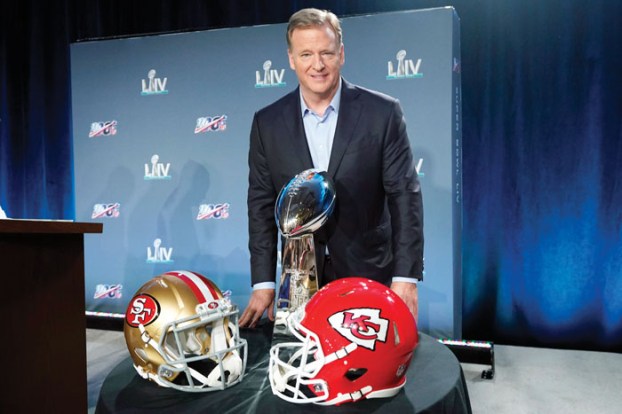 Roger Goodell thinks the NFL is doing some great work in making the game safer for players.

Believe that if you will, though the statistics don’t exactly bear the commissioner out. Concussions were up this year and a study by The Associated Press showed a staggering amount of games missed because of injury.

The more players are hit, the more they’re hurt. It’s a simple fact of football that all the talk about concussion protocol, improved helmets and rule changes won’t change.

That’s why 16 players who were on the San Francisco 49ers roster when the season began won’t be in the Super Bowl. It’s why the NFL has injury tents on the sidelines, where some players in this Super Bowl will inevitably end up.

And it’s why the NFL’s push to add a 17th game to the regular season may be good for business — but not particularly good for the future health of its players.

Well, not quite yet. The NFL still must convince the players’ union to go along with the increase in regular season games, and Sherman is not alone in voicing concern about the toll it will take on him and his fellow players.

But what the NFL wants it usually gets. And months into negotiations for a new union contract to replace the one that expires in 2021, it’s clear the NFL wants more games.

Just how that will play out remains to be seen. There has been talk of every team playing their extra game away from home, in a place where there are no NFL teams, as a way of growing the league. The playoffs could also be expanded from the current 12 teams as part of any deal.

It used to be teams would play starters a quarter or less in the first preseason and increase playing time the next two games before resting a lot of players in the final exhibition game. But the old model for the most part has been abandoned, making it even more difficult for teams to justify making fans buy exhibition game tickets as part of their season ticket packages.

In Jacksonville this season, 40 players were held out of the final exhibition game. For the last two years, Rams coach Sean McVay sat virtually every starter the entire preseason — a strategy that paid off the first year with a healthy team and a visit to the Super Bowl.

That meant noticeably ragged play across the league in the first few games of the regular season. And it added to the NFL’s increasingly fervent desire to do something about it — and make some more money at the same time.

Fixing the preseason problem is one thing. But adding a game to a regular season that already churns through players is almost as bad as the original plan to go to an 18-game schedule.

Another check might be nice. But not at the expense of a player’s health and safety.

“Players really care about player safety and care about longevity and they care about getting to their families and being able to speak to their families in old age,’’ said Sherman, who is he union representative for the 49ers and a vice president of the players’ union. “And adding another game to this gauntlet of a schedule is just going to make things a lot more difficult for players.’’

That doesn’t mean there will be an expanded schedule in the new collective bargaining agreement that will replace the 10-year deal that expires after next season. The NFL has been pressing the idea in negotiations, and dangling the kind of carrots that players like — mostly money — as the reward for agreeing to it.

Goodell said Wednesday he wasn’t going to comment on the ongoing talks, but said any deal on adding a game would involve changes in the off season, training camp and practices during the season.

“I think we’ve addressed difficult issues that face our league going forward and looking forward,’’ Goodell said. “I think both the players and management and everyone at the negotiations have worked to try to find creative solutions to make the NFL better and that’s what you want.’’

Sherman and others might not be convinced, and for good reason. He played only nine games in 2017 after tearing his Achilles tendon, and the Seattle Seahawks unceremoniously cut him after the season. There was no bonus, no long goodbye, because in the NFL every player is dispensable, even one who played a major role in leading Seattle to two Super Bowls.

Like it or no, though, money will win out on both sides. Owners will make more and so will players.

Probably enough to add an extra injury tent or two to the sidelines.

No. 1 Nadal upset in Australian Open

By Howard Fendrich AP Tennis Writer MELBOURNE, Australia (AP) — Outplayed at his own brand of physical tennis for much... read more