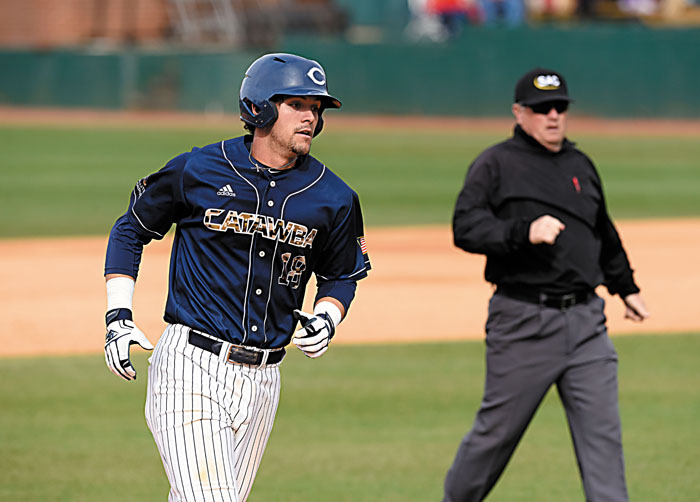 Wayne Hinshaw file photo/for the Salisbury Post .... Catawba’s Hunter Shepherd heads for home after a home run, during a game last March 16 against Carson-Newman. Shepherd, from Salisbury, is a senior leader for the Indians. Catawba was picked to win the South Atlantic Conference for the eighth straight time and starts the new season on Friday, in Tampa, Fla.

SALISBURY — Catawba being picked to win the South Atlantic Conference by the league’s baseball coaches is a sure thing.

Right up there with death and taxes. This is the eighth straight time it’s happened.

Catawba has a host of fine returning players, but other teams, especially Newberry, which won the regular season championship last year, have even more. The preseason first team All-SAC pitching staff is made up of three Newberry hurlers and Catawba lefty Bryan Ketchie.

So why are the Indians favored?

A large part of it is a stable coaching staff headed by Jim Gantt.  Gantt owns 834 victories as he enters his 24th season at the helm of the program.

Catawba may have finished tied for third in the SAC regular season a year ago, but the Indians raised their level of play in the postseason and rolled through the SAC tournament and the new regional/super regional format. Catawba finished the 2019 season playing at Cary’s Coleman Field in the Division II Championship Tournament (for the third time). And that’s exactly where you want to finish seasons.

“I didn’t vote for us No. 1, I can tell you that, but we can have another good team,” Gantt said. “We’ve got to solidify a few things, but we have our strong points. I really like our infield defense. I like our team speed. I think we’ve got a lot of guys who can give us favorable match-ups out of the bullpen.”

Catawba doesn’t boast the crazy offensive power it once did. There was a time when the Indians bruised the green walls at Newman Park all weekend long, but Catawba was out-homered by opponents, 58-43, last season.

Fortunately, Catawba’s players have adjusted to scoring runs without three-run bombs. They hit more singles, doubles and triples than their opponents. They walked a lot more and stole a lot more bases. Catawba also out-pitched and out-fielded the opposition, so it all added up to a pretty enormous advantage in the runs scored and runs allowed columns (432-256).

The Indians were really formidable on the bump last season, the best in the league, especially when you consider their hurlers toiled 27 times at cozy Newman Park.

Two key pitchers who had eligibility remaining are gone — Peyton Williams to the MLB draft and Riley Myers to grad school at Wake Forest. Those aren’t easy holes for a D-II program to fill. They had Catawba’s two best ERAs. Williams was the closer and was almost automatic in that role. Myers was 9-1 and was frequently amazing.

“Between them, that’s 13 wins and 13 saves,” Gantt said. “Every college team loses players, but that’s two we didn’t know we’d be losing at this time last year. I’m not sure how you can replace guys like that.”

“Those three guys, we see them pitching multiple relief innings,” Gantt said. “Strickland has shown he can be dominant out of the bullpen. Cowie can command a split-finger pitch and you don’t see it much at this level. He’s got a chance to be really successful. Laxton might end up as the guy at the back of the bullpen. I don’t think any of our guys really cares when they pitch. They just want to pitch.”

The other arms in the pitching stable include Tyrese Hearst, a transfer with experience. Catawba got him after Winston-Salem State folded its program. Hearst, who won three games for the Rams in 2019, was special for the High Point Legion program. He’ll open this season penciled in as the fourth starter.

Kenny Dollenger, a freshman lefty from Maryland, has serious potential. So does big sophomore Bryson Linkous (6-foot-8, 240). Local products Caleb Link and Pearce Wilhelm will be factors out of the bullpen. Gantt said Link’s stuff is “electric.” His pitches have great movement. Trent Montgomery, a low-arm angle hurler with a good breaking ball, and freshman Daniel Durham, are also going to help. Gantt said Durham is in great shape and enjoyed a strong spring. Connor Garcia, a lefty who came from Winston-Salem State, is someone to to keep an eye on for the future.

A local pitcher who won’t be in action this season is Deacon Wike. He had surgery to fix a patellar tendon tear and will redshirt this season. At least four Indians, including a couple of promising infielders, will be redshirted.

Catcher Cameron Morrison is good enough defensively and handling the pitching staff that he’d be an asset if he batted .100, but he was a lot better than that last season. He checked in at ,265 with four homers and 27 RBIs.

“He’s so smart,” Gantt said. “He’s a really good receiver and he gets some of those borderline-high pitches called strikes. He makes people mad in the other dugout.”

Zack Miller, who started  52 games for D-I Delaware last season, is a catcher by trade and probably is Catawba’s key offensive addition. Morrison will still be the regular catcher, but Miller can give him some rest. Miller, who launched five homers last season, is going to get plenty of at-bats as the DH.

“Miller has tremendous power,” Gantt said. “He’ll probably be our cleanup hitter. We’ll  have to get his bat in the lineup.”

Catawba is in good shape at catcher, with Lyle Pfingst and Anthony Ponce also available.

Catawba couldn’t be any better in the infield. The Indians have experience at every spot with Shepherd (.358, 12 homers) at first base; Joe Butts (.271, 33 RBIs) at second base; Jackson Raper (.352, 8 homers) at third base, and Jeremy Simpson (.295, 7 homers, 40 RBIs) at shortstop.  All of them are at least as good defensively as they are offensively. Quick and smart, Simpson might be the SAC’s top defender, while Shepherd and the strong-armed Raper are two of the league’s better left-handed sluggers. They tied for second in the SAC last season with 55 RBIs each. Butts is an exceptional baserunner. All four will cheerfully take a walk and posted solid on-base percentages.

When Shepherd pitches, Luke Spiva, another Winston-Salem State transfer, could be the first baseman. He drove in 34 runs for the Rams last season.

Dylan Wilkinson has power and could get chances at first base or DH.

Versatile Cameron Mills is the top backup at second, third and shortstop.

In the outfield, Gantt looks forward to getting a full year from center fielder Bryce Butler. Butler (.252) missed about half of last season after being hurt right out of the gate. When he’s 100 percent, he has game-changing speed and is a potential catalyst for the offense, whether he bats first or ninth. His wheels make him a huge asset defensively.

Lefty-swinging Henderson Lentz is the probable starter in left field. He didn’t hit with a lot of power last season, but he produced a steady stream of line drives. He batted .293 and runs well. In 191 at-bats, he grounded into just one double play.

“He’s got such a good attitude, he’s up every day, and everyone likes him,” Gantt said. “He’s got great hand-eye coordination. He’s a lefty who can hit lefties.”

Spiva is likely to get some action in left field. Ponce, one of the catching backups, also could play out there.

Lee Poteat gets on base at a high rate (.414 OBP), is a strong defender and offers good speed and some power. He’ll play a lot in right field.

Cowie, a Cherryville Legion star with a ton of talent, will also get some shots in right field.

Lentz or Poteat could move over to center field in certain match-ups if Catawba wants to go with an offensive-minded outfield, but Butler’s glove won’t be off the field often.

Freshman Luke Barringer is a slugger who will get his first opportunities to help as a pinch-hitter. Trent Walsh, a transfer from UNC Pembroke, is another good bat the Indians can bring off the bench.

Obviously, it’s going to be another stout squad. If the Indians get some pop from the outfield and can figure out the roles in the bullpen, they’ll be in the hunt for more championships.

“We’ve been scrimmaging since the first day of practice, and it’s been very competitive,” Gantt said. “Our pitchers were ahead of our hitters at the start, but then the hitters caught up, and the pitchers had to make adjustments. It’s been back and forth, and I know they’ve all made each other better. Now we’re eager to start playing someone else.”

The Indians will play three games in Tampa, Fla., with the season opener on Jan. 31. Barton, Columbus State and St. Leo will furnish the opposition. The first home game is scheduled for Feb. 8., a noon doubleheader against West Virginia State.