Trump Victory, a joint fundraising committee for Republicans, including the president, hosted “stop the madness” training events throughout North Carolina in which more than 100 volunteers to discussed the ongoing impeachment trial. 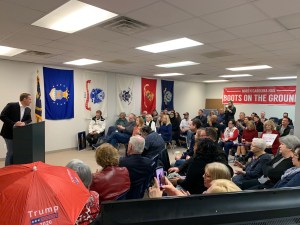 U.S. Rep. Ted Budd, R-13, speaks to volunteers urging them to stand with President Donald Trump as a part of a “Stop the Madness” campaign in Greensboro on Saturday.

U.S. Rep. Ted Budd, R-13, participated in a training at the Guilford County GOP Headquarters in Greensboro. Former Gov. Pat McCrory spoke at a Charlotte training on Friday, and N.C. GOP Chair Michael Whatley hosted one in Raleigh on Saturday.

“We need boots on the ground to ensure President Trump wins North Carolina and the presidency,” Budd said during a news conference. “Four more years of Donald Trump means more results for the Tar Heel State and I am honored to help ensure Republicans up and down the ballot come out victorious in November.”

“The goal of the Democrats since day one has been to impeach a duly elected president and overturn the wishes of 63 million Americans,” Walker said. “From my point of view, President Trump has delivered for my constituents and Americans across the board. Come November, I know North Carolinians will show up at the polls and reelect the president.”

McCrory said Democrats need to end the baseless smear campaign and get back to work.

“President Trump has delivered lower taxes, relief to our farmers and manufacturers, and took out the No. 1 bad guy in the world,” McCrory said. “The Tar Heel State is seeing unprecedented results thanks to the pro-growth, America First policies and I am proud to stand here today in support of our great president.”

Sen. Carl Ford, R-33, was assigned to four interim committees that will conduct oversight and make policy recommendations between the General Assembly sessions.

“I want to thank our members for all their hard work over the long session to address critical issues in our state,” he said. “With the session coming to a close their attention to those issues will continue. I appreciate their dedication to the making North Carolina the best state in the country and I look forward to seeing the work they do during the interim.”

In a Dec. 31 order, a federal district court blocked North Carolina’s voter photo ID requirement from taking effect. The order will remain in place until further order of the court.

“We know these changes can be confusing for voters, and we wanted to make sure all voters have the latest information about the primary election,” said Karen Brinson Bell, executive director of the State Board of Elections. “This mailing also provides important election dates for voters to add to their calendars.”

The following are upcoming dates for voters to remember:

Sen. Thom Tillis, R-N.C., reiterated his support to protect life ahead of the March for Life rally in Washington Friday.

Last week, Tillis received an “A” rating from the Susan B. Anthony List for his legislative record supporting pro-life measures.

“I want to thank everyone who traveled to our nation’s capital to march for life in this year’s rally, especially those from North Carolina,” Tillis said. “I will continue to be an ally in protecting life and I am proud to receive an ‘A’ rating from the Susan B. Anthony List for my record on pro-life measures.”

On Thursday, Tillis and his colleagues a letter to Secretary of State Mike Pompeo on Thursday asking the administration to expand the “Protecting Life in Global Health Assistance” policy, formerly known as the Mexico City Policy, to address domestic non-government organizations that receive federal foreign assistance.

Tillis joined 18 other senators and 40 other representatives.

During their regular January meeting, the Cabarrus County Board of Commissioners unanimously adopted a resolution supporting the Second Amendment rights of the citizens of Cabarrus County. The resolution was drafted and presented by Jay White who is a candidate to represent the newly redrawn House District 83 seat which encompasses Harrisburg and western Concord.

Before it was redrawn, the district included parts of southern Rowan County.

Grassroots groups across North Carolina have pressured county boards of commissioners to adopt such resolutions. Since no resolution was presented at the monthly work session, it was unclear as to whether or not a Second Amendment Resolution would be considered by the board, White said in an email.

“My legal expertise allowed me to draft a resolution that would not put the county at risk, but still addressed the concerns of our citizens,” White said after it was passed. “During my years of service to the people of Cabarrus County, I learned the importance of working with other leaders, building a consensus and achieving results.”