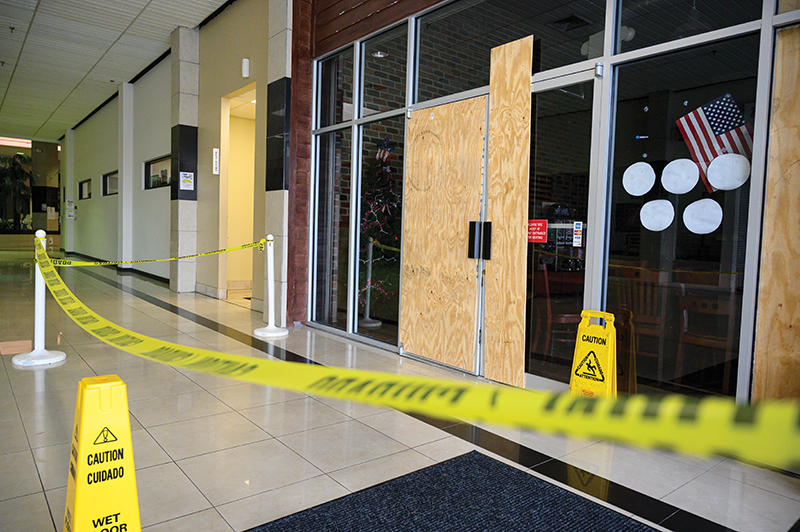 Josh Bergeron / Salisbury Post - Yellow caution tape surrounds one entrance to Thelma’s Down Home Cooking, which also has several doors boarded up following a shooting that occurred on Sunday just after midnight.

By Josh Bergeron and Liz Moomey

SALISBURY — Rowan County government on Monday terminated a lease with Thelma’s Down Home Cooking at West End Plaza after a mass shooting at the restaurant on Sunday.

A total of six people were shot in the incident and three treated for other injuries, including two who were trampled and one who suffered from anxiety issues. Thelma’s, which opened in late 2013 at what was then the Salisbury Mall, now has 30 days to vacate the property, according to a letter sent Monday and provided to the Post. The letter was signed by County Attorney Jay Dees.

“While we have worked with you in the past regarding past due rent payments, the recent shooting event of the early hours of Sunday, January 26, 2020, created new breaches of your lease,” the county’s letter states.

In a statement provided to the Post, Manager Aaron Church said county government takes the “safety of our citizens, tenants and their guests at West End Plaza very seriously.”

Social media posts show people packed into the restaurant for a party late Saturday and early Sunday, with a number of attendees standing on counters and dancing as music played. The shooting occurred shortly after midnight. Police haven’t named suspects and say partygoers are not cooperating.

Catawba College Dean of Students Jared Tice said three of the school’s students were also injured, including one who was shot. Tice said all three have since been treated and released from the hospital. He said the college on Sunday offered mental health counseling services to students.

The event was neither organized or sponsored by Livingstone or Catawba colleges.

County commissioners, who bought the Salisbury Mall in 2013 and renamed it West End Plaza, said they needed to take action.

“If you had six people shot and you’re the landlord, you’ve got to look at the situation,” Commissioner Mike Caskey told the Post.

Commissioner Craig Pierce said, “The county is going to take every effort to maintain the safety of the citizens.”

Thelma’s original lease is dated October 2013 and was made between North Salisbury Realty and Thelma Luckey, the restaurant’s owner and namesake. County government bought the former mall for office space, but it assumed ownership of Thelma’s and other leases after the purchase.

The county’s letter sent Monday listed two pages of reasons for the termination, including that the lease only allowed use of the space for a “restaurant and for no other purpose without prior written approval.”

“Use of the leased space for a private event where no food or drink was being served by Thelma’s without notice to landlord and landlord’s approval constitutes a breach,” Dees wrote in the county’s letter.

As reasons for cancellation, the county’s letter further noted Luckey was present during the “unapproved event,” that there was unapproved alcohol on the property, sound from the party spilled outside of the restaurant and into a gathering occurring at the same time in West End Plaza and that liability insurance lapsed in November.

Dees wrote that the restaurant allowed party organizers to charge an entry fee, which “constitutes both an unapproved ‘subletting’ and a ‘business operation’ in breach of your lease.”