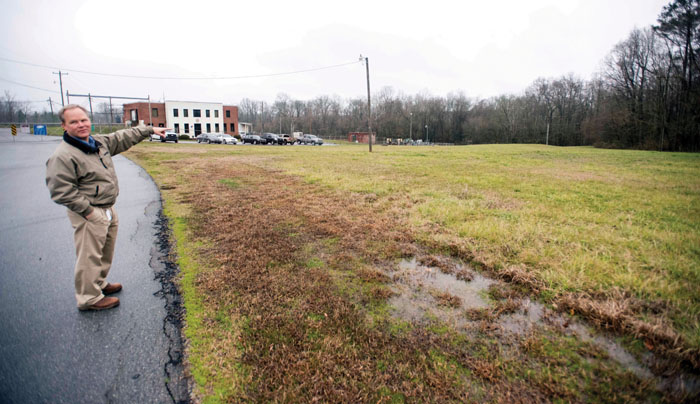 JON C. LAKEY/SALISBURY POST Salisbury-Rowan Utilities Utility Director Jim Behmer points out the area where a new construction will take place at the Grant Creek Waste Water treatment plant. The Salisbury-Rowan Utilities is nearing a construction phase of improvements to parts of the water treatment process for the utility owned by the City of Salisbury. Salisbury,North Carolina,1/24/20.

SALISBURY — Three projects projects with an estimated cost of $30 million are in Salisbury-Rowan Utilities’ future.

On the water treatment side, two projects at the downtown water plant are estimated to cost $10 million to replace filters and add an on-site solids handing system. At Grant Creek Waste Water Treatment Facility in Spencer, which serves customers west and north of Main Street, SRU plans to replace a pump station that is in a floodplain and outdated. The project will cost about $20 million. The three projects, along with $10 million to refinance existing debt, would be paid for through a $40 million revenue bond that is going before the state’s Local Government Commission for approval.

The projects are a part of the Salisbury-Rowan Utilities’ capital improvement plan, which list the big item improvements needed in the next 10 years. The last project of similar size occurred in 2003 and created an active-flow building for the pre-treatment process at the water treatment facility. It cost about $7.5 million, while another $30 million went to replace water lines.

The Salisbury City Council this week passed a resolution for the projects and advanced the $40 million package to the Local Government Commission, which oversees debt of local governments across North Carolina.

Assistant Utilities Director Jason Wilson referenced a comment made by Councilman David Post at Tuesday’s City Council meeting that water and waste water projects have a lot of commas and lots of zeros when he said the projects are “just expensive.”

A return on investment, though, is important for Salisbury-Rowan Utilities, Wilson said.

The project to upgrade the solid handling system is an example. Currently, the plant has biosolids that are dried through a belt press to squeeze out excess water after transport to the Town Creek Waste Water Treatment Center, several miles away. There are no nutrients in the solids from the water treatment facility. So, combined with biosolids from the wastewater plant, the finished material can be used as fertilizer by farmers.

The renovation means less water going from the downtown water treatment facility the Spencer wastewater site. The finished product could be used for other things in addition to fertilizer or be taken directly to the landfill, Wilson said. It’s also possible that the product could be offered to brick makers.

“It’s a win, win, win,” Wilson said. “It checks all the boxes for us on being able to justify investing in this project.”

Salisbury-Rowan Utilities will also be replacing 12 filters that remove additional matter from the water before it goes through a disinfection step. Four filters are original to the building, which opened in 1950. Wilson called the filter replacement a maintenance project. Currently, the process uses water to filtrate, but the upgrade will feature an air scour system that is more efficient and will save water, he said. Albemarle recently did a a filter upgrade, and Salisbury-Rowan Utilities learned from that process, Behmer said.

“Customers won’t know any difference,” Wilson said. “We should just be more efficient in our operation.”

“We’re going to spend a good bit of money,” Wilson said. “We’re going to invest a lot of money in this equipment and the contractors to do it. We anticipate getting the money back over a period of time.”

Salisbury-Rowan Utilities is constantly evaluating its system, with Wilson saying the agency likes to be progressive.

“We like to be on the cutting edge, not the bleeding edge,” he said. “We don’t like to be the first ones when we do things, but we do like to be close behind them.”

Behmer said the projects will occur over multiple fiscal years.

At the Grant Creek Wastewater Treatment Facility, an estimated $20 million project will replace the influent pump station, which moves the wastewater, that is at the end of its service life after being in operation since 1962. The station is also in the floodplain. Though the pump station hasn’t flooded, it needed sandbags during hurricanes Matthew and Florence. If if rain water gets too high, it ends up being treated also.

And if it floods, it disrupts the biological process of microscopic organisms — or bugs — feeding on organic matter in the wastewater.

“You just lose all your treatment, so it just takes a lot of biology to build that back up,” Behmer said. “Literally it washes out the plant.”

The new pump station is expected to allow better management of the treatment facility.

“We have to replace it anyway,” Wilson said. “Let’s move it out of harm’s way.”

Behmer says the projects and final price tag will go before city council. According to Salisbury Finance Director Shannon Moore, they anticipate requesting from Local Government Commission at their March 3 meeting.