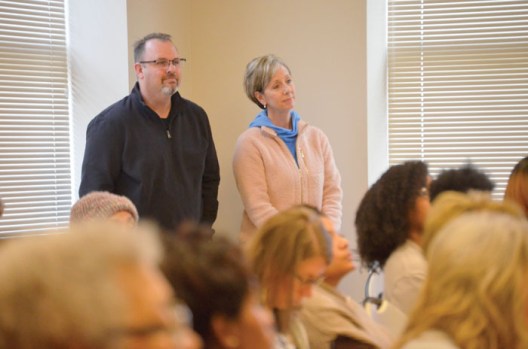 Lynn Dunn stands next to her husband, who works for the city of Salisbury. The couple attended the Stop Human Trafficking Forum held on Saturday with their 16-year-old daughter, Grace. Lynn said she learned a lot about how the growing issue can happen anywhere. She wanted her daughter to hear about victims of human trafficking. Shavonne Walker/Salisbury Post 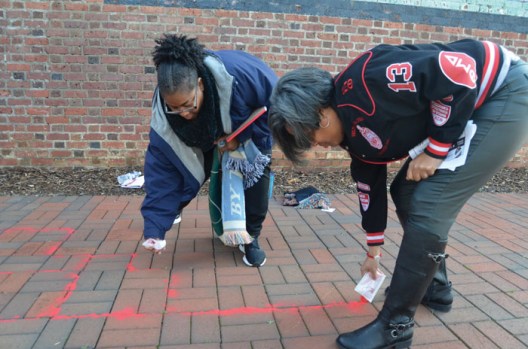 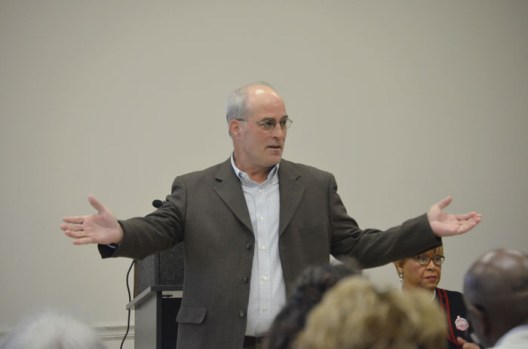 Mark Comer with the Salisbury Police Department shares the story of his brother-in-law Jerry who was a victim of human trafficking. Jerry has intellectual disabilities and was in labor servitude to a woman and her family for 20 years. He told a group gathered at the Stop Human Trafficking Forum how to know the signs and what he and his wife have gone through to help Jerry. Shavonne Walker/Salisbury Post 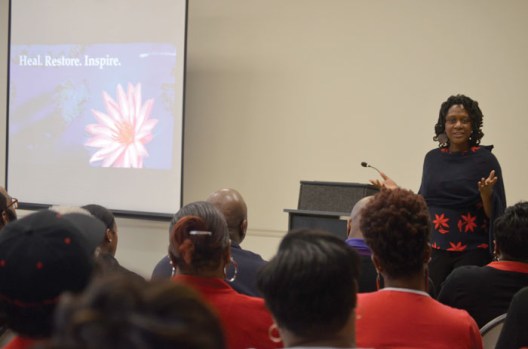 Benjenus Jenkins with Lily Pad Haven Inc. talks about the services the nonprofit provides for surviors of human traffcking. The Charlotte-based organization has a number of safe houses, including in Salisbury, for victims of human trafficking. The organization was one of featured guests to speak about how people become victim, how families and others can educate themselves. The Saturday event was sponsored by the Salisbury Police, Delta Sigma Theta Inc., Omega Psi Phi Inc. and the Salisbury-Rowan NAACP. Shavonne Walker/Salisbury Post

SALISBURY — There are an estimated 40.3 million people who have been forced or coerced into modern slavery worldwide in the form of human trafficking.

The victims are men and women of all ages. It can easily happen in the Salisbury-Rowan community, according to experts who spoke at a Saturday Stop Human Trafficking Forum.

The three-hour forum was held at the Park Avenue Community Center and featured the family of a man who was coerced into performing involuntary labor for two decades and members of the Lily Pad Haven Inc., a nonprofit organization that provides transitional housing and other needs for victims of human trafficking. The forum was co-sponsored by the Salisbury Police Department, Delta Sigma Theta Sorority Inc., Salisbury-Rowan NAACP and Omega Psi Phi Fraternity Inc.

Mark Comer, Salisbury Police parking enforcement specialist, shared the story of his brother-in-law, Jerry, who performed grueling labor for a Stanly County woman from 1993 to 2013. Jerry, who has an intellectual disability, began staying with a woman he trusted when he quit his job.

Jerry allegedly was exploited and neglected by a woman named Shirley, who owned a family farm in Norwood, Comer said. Jerry stayed with the woman and her husband. The woman told Jerry he could stay but he had to take care of the large livestock and he had to pay her, Comer said.

“But it never ended,” Comer said.

In addition to taking care of the livestock, he had a job in Mount Gilead making $50,000 a year. But he only kept about $200 from each check, and turned over the bulk of his check to Shirley.

Comer said Jerry had little to no proper dental work and wore torn clothing. When Jerry had a medical condition that required a hospital stay, Comer and his wife visited him and realized something wasn’t right.

Jerry had $34 in his pockets. The Comers asked Jerry about his bank account and he told them, “Shirley takes it from me.” Those five words would take the family on a multi-year journey.

The Comers tried to seek criminal charges and restitution for all the money Jerry had lost, but Shirley’s money was mostly tied to her retirement, which they couldn’t touch despite Shirley’s net worth reportedly being $5.5 million in 2011. The Comers didn’t initially receive much help from the local law enforcement and the district attorney’s office, who chalked up what happened to Jerry as an “arrangement gone bad.”

They didn’t understand how Jerry could be intellectually disabled but hold a job and drive a car and yet still be taken advantage of in such a way, Comer said.

The Comers settled a civil lawsuit a few years ago. Shirley, who was 71 years old at the time, was charged and convicted of tax evasion. In addition, Shirley’s daughter was charged with offenses related to identity theft. She reportedly had opened multiple store accounts and credit cards in Jerry’s name.

Comer encouraged anyone who suspects family members or friends are victims of human trafficking to be diligent and continue until they get the answers they seek.

Once victims are brought out of human trafficking, they often have nowhere to go. In some cases, they need help transitioning back into society. The staff and volunteers at Lily Pad Haven Inc., a Charlotte-based nonprofit, helps victims get into transitional housing, one of which is located in Rowan County.

Gaston County Assistant Police Chief Suzanne Mauney-Smith represents local law enforcement on the North Carolina Human Trafficking Commission, an appointment she received by the senate. She spoke briefly about how victims are targeted into sex trafficking including online.

She gave the example of a Cumberland County man, Robin Applewhite, who was sentenced to 230 years for sex trafficking. He’d contact the women when he saw them advertising on Backpage, a now-defunct classified advertising website that once was a central location online for prostitution.

Some of the women Applewhite recruited traded sexual services for drugs and were kept locked in a basement.

“We are doing things, but I think we can do more once law enforcement are trained better,” Mauney-Smith said.

In Gaston County, first responders and fire marshals were trained because they can gain access that law enforcement just won’t have, she said.

One way to not become a victim, Mauney-Smith said, is to be aware of your surroundings. Those who look down when they walk or are on their cellphones are susceptible to being kidnapped, she said.

The No. 1 spot for human trafficking in North Carolina is centered on Charlotte. The state as a whole ranks in the top 10 in the nation.

The three most common types of human trafficking are as follows:

• Using force, fraud or coercion to recruit, harbor, transport, obtain or employ a person for labor or services in involuntary servitude, peonage, debt bondage or slavery.

• The recruitment, harboring, transportation, provision, or obtaining of a person for the purpose of a commercial sex act, induced by force, fraud, or coercion, or in which the person performing the act is under age 18.

• If a person under the age of 18 is performing a commercial sex act, they are victims of human trafficking.

• Force, fraud or coercion doesn’t have to be proven.

• Unexplained absences from school or an inability to attend school on a regular basis.

• Much older “boyfriend” or “girlfriend.”

• Signs of physical or sexual abuse.

• Isolated from friends, family or caregiver.

• Affiliated with a gang.

• Is not in control of money.

• No control over their schedule.

• Someone else speaks for them.

• Has a lot of hotel key cards.

To learn more contact the National Human Trafficking hotline at 1-888-373-7888 or text 233-733 (be free). There are several ways the community can get involved at the Lily Pad Haven Inc. by visiting lilypad-haven.org/get-involved/ for more details.