Rahm takes the lead at Torrey Pines with McIlroy lurking 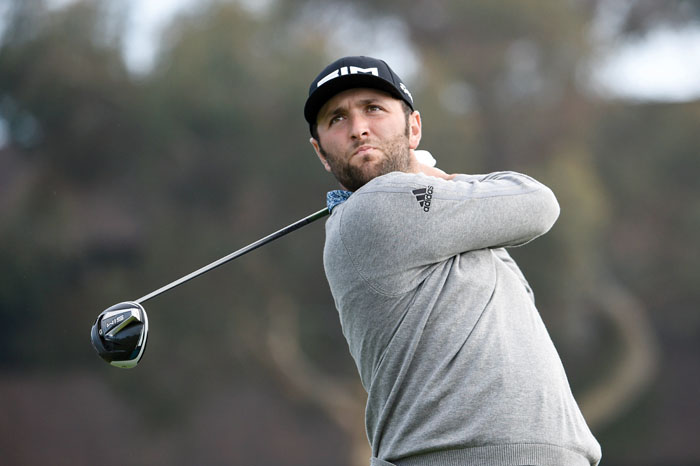 Jon Rahm of Spain hits his tee shot on the 14th hole of the South Course at Torrey Pines Golf Course during the third round of the Farmers Insurance golf tournament Saturday, Jan. 25, 2020, in San Diego. (AP Photo/Denis Poroy)

By DOUG FERGUSON AP Golf Writer
SAN DIEGO (AP) — Jon Rahm is playing some of his best golf with two victories and a runner-up in his last four tournaments. He was at his best Saturday at Torrey Pines, holing a chip for birdie and a full gap wedge for eagle to start his round.
Even after a 7-under 65 for a one-shot lead in the Farmers Insurance Open, Rahm knows as well as anyone that the hard work is still in front of him, mainly because of whoever might be behind him.
Three years ago, that was Rahm. He made two eagles over the last six holes for a 66 to capture his first PGA Tour title. This year, it could be Ryan Palmer and Rory McIlroy in the final group, maybe even Tiger Woods from five shots back.
“The back nine three years ago? It will do absolutely nothing, really,” Rahm said. “The only thing it’s going to do is keep me focused, no matter how good I’m playing, knowing that somebody can come and do the same thing.”
After a two-hour fog delay, Rahm had the ideal start. He chipped in from just off the green at No. 1. Then, he hit a gap wedge from 111 yards that landed short of the hole and rolled in for an eagle.
Equally important was saving par on No. 5, and then on Nos. 12, 14 and 15, each of them feeling just as good as birdies.
It led to the low round of the day. He was at 12-under 204 and had a one-shot lead over Palmer, whose card was a mixture of birdies and bogeys until a 10-foot birdie on the 17th gave him a 71.
Rahm and Palmer have good history. They were teammates at the Zurich Classic in New Orleans and won. This time they’re on their own, with company.
McIlroy can go to No. 1 in the world with a victory, and after a poor finish on Friday, he got it right this time. McIlroy hit a 5-iron from a bunker on No. 12 — the third-toughest hole of the day — to 6 feet for birdie. He also powered a 3-wood over the water to 20 feet on the par-5 18th that set up an easy birdie for a 67.
That left him three shots behind and in the final group with Rahm, the first time they’ve played together on Sunday on the PGA Tour.
“It was nice to shoot a good third round here and get myself a little bit closer,” McIlroy said. “There’s a lot of guys like 6-, 7-, 8-under par. Need to go out and try to replicate what I did today. If I can do that, I’ll have a good shot.”
Woods finished with a 15-foot putt — his longest of the round — on the par-5 18th and hopes it will give him some momentum going into Sunday. Never mind that the putt was for par. He sent his wedge over the green and into the bunker, and another dropped shot could have been costly. The par salvaged a 69 that got him within five shots. It wasn’t a bad score, it just felt like way after the start.
Woods opened with two birdies in three holes, chipped in for par, added two more birdies for a 32 and suddenly was within two shots of the lead as he goes for a ninth victory at Torrey Pines, and a record 83rd in his PGA Tour career.
But he didn’t make another birdie, and didn’t even have a chance at one from closer than 20 feet.
“It was important to make that putt,” he said. “By the end of the day, there will probably be 10, 11, 12 guys ahead of me. I’ve still got to go out there and post a low one tomorrow.”
Woods was among 16 players within five shots of the lead.
Sung Kang (67), PGA Tour rookie Harry Higgs (69) and Cameron Champ (68) joined McIlroy at 9-under 207. The group another shot behind included Tony Finau, Patrick Reed and Brandt Snedeker, a two-time champion at Torrey Pines who birdied his last two holes to salvage a 72.
McIlroy is playing for the first time since late November and didn’t appear to pick up too much rust during his break. This is his second time playing Torrey Pines, and it feels suited for him, even if he struggles like everyone else on poa greens.
“Even if you’re not making that many birdies but if you keep giving yourself chances, it’s one of these golf courses that you feel like you’re playing really well, you might be a couple under,” McIlroy said. “That’s OK. No one else is going that low. Keep doing the same thing tomorrow and should be right there.”