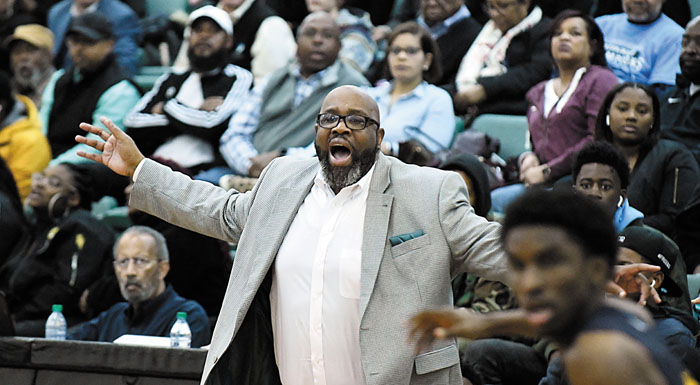 “To God be the Glory,” said the modest Stinson, who wasn’t all that crazy about the attention the milestone win was getting. “It was a good opportunity for us to try to get back on the winning track and try to bring the team back together. It’s us trying to get more consistent as we head down this home stretch. We’ve had some trying times this season and we’ve kind of faltered from the standpoint of not being able to execute, limit turnovers and improve our shooting percentages.”

Prior to the St. Aug’s loss on Wednesday night, Livingstone lost to J.C. Smith, 77-72, on Jan. 18. A big crowd had shown up at New Trent Gym for No. 500 and the festivities afterwards, but the Golden Bulls had other plans.

Then came the setback to the Falcons, one that got away from the Blue Bears.

“St. Aug’s was a tough loss for us,” recalled Stinson. “We turned the ball over with the lead a few times and they executed and won the game. We just have to get out of our own way. Our opponents are determined to not let Roger Ray beat them, so we have to have other people step and and catch passes and finish plays.”

At Morris, Elmore had a big steal and free throw, late in the game. Then, Livingstone’s pressure defense, including half-court traps, led to another steal and more free throws.

Morris still had a chance in the final seconds, but a turnover was picked up by Ray and the senior guard dribbled out the clock. Ray led all scorers with 18 points.

“The team showed true heart at Morris by pulling out a close victory,” said Stinson. “It’s always unique how we can go to a non-conference school, after after playing a tough game at home, and then get right back to being prepared. That helps us tournament-wise, because that’s how it works there.”

Since the win, Stinson said that he has heard from many of his former players, from both Livingstone and Barber-Scotia. Stinson coached at Barber-Scotia, an NAIA school in Concord, from 1990-2004, his teams there compiling a record of 272-160. The Sabres enjoyed eight 20-win seasons under Stinson.

Stinson thought it was ironic that victory No. 500 came on the home court of an NAIA school in Morris. “It kind of came full circle, so to speak,” said Stinson. “We’re just glad to get a win, letting us see where we can be — if we play to our capabilities.”

“It was really touching, for an opponent to do that,” added Stinson. “Morris was a class act about it and I really appreciate Coach Houck handling it that way.”

Stinson, now in his 16th season at Livingstone and 30th overall, arrived in Salisbury in 2004. His first Livingstone team won 17 games and advanced past the first round of the CIAA Tournament for the first time in 10 years.

Overall, between Stinson’s two coaching positions, his teams have a record of 500-379 (win rate of 57 percent).

“It’s unbelievable how many lives can be touched through the game of basketball and educationally,” Stinson said, repeating part of a letter that he recently sent to all of his former players. “From Scotia to ‘Stone, (my position) has enabled me to deliver a message of determination, commitment and service.”

Stinson graduated from North Mecklenburg High School, where he was a solid student-athlete. He received a basketball scholarship to Barber-Scotia in 1983 and eventually earned All-EIAC honors in basketball for the Sabres and Dean’s List recognition before earning his degree in 1987.

NOTES: Livingstone’s women also won at Morris on Thursday, 52-29. … The Lady Blue Bears are now 8-10 overall, but have won three of their last five games. … both LC teams play at Claflin (Orangeburg, S.C.) on Monday night, with the doubleheader tipping off at 5:30.