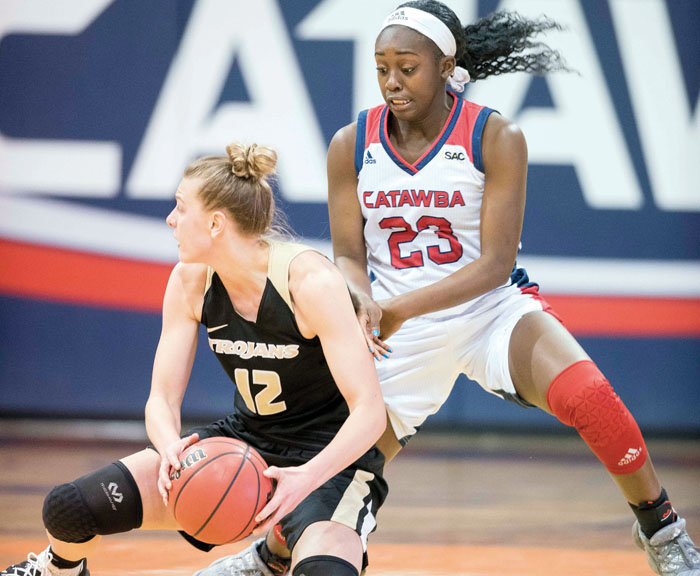 SALISBURY —It may have been the fastest-paced 53-52 game in women’s college basketball history.

Catawba and Tusculum flew up and down the floor at Goodman Gym on Saturday, but neither scored consistently. The Indians had the 53 on the scoreboard at the end thanks to a slick play by Shemya Stanback and Taisha DeShazo with 30 seconds left.

“I knew it was going to be this type of game,” Catawba coach Terrence Baxter said. “Tusculum plays pressure basketball just like we do. They ‘D’ you up.”

Tusculum’s Devan Carter is one of Baxter’s closest friends in the coaching ranks. They talk often. They’ll have great conversations about this one.

Tusculum almost won despite losing senior guard Sydney Wilson to an injury prior to the stretch run. She was giving the Indians trouble, and Baxter acknowledged the outcome may have been different if she hadn’t gone down. We’ll never know.

Tusculum took it to the Indians early. It was 20-7 after Wilson’s layup with 2:20 remaining in the first quarter.

“I had to call a timeout and tell our girls to stop looking up at the scoreboard because the more they looked, the deeper the hole got,” Baxter said. “They finally stopped looking and started playing.”

Lyrik Thorne and Madi Hallman made 3-pointers to start Catawba’s comeback. Catawba shut down Tusculum’s offense and caught up at 22-all on a 3-pointer by Emily Phillips.

Neither team could gain control in the second half. It went back and forth.

Janiya Downs finished on a determined drive to give the Indians a 49-46 lead with 1:52 remaining, but Tusculum’s Brianna Dixon answered with a game-tying 3-pointer nine seconds later.

Stanback made one of two free throws for a 50-49 Catawba lead with 1:14 left, but Tusculum responded with another 3-ball, this one by Jalia Arnwine. It swished with 47 seconds left.

Down 52-50, Catawba ran its half court offense patiently, working the ball, turning down a couple of 3-point attempts.  With 30 seconds left, Stanback found DeShazo on a backdoor cut.

“I was looking at my defender and she was expecting me to get a handoff and she took one step out,” DeShazo said. “As soon as I saw that step, I cut to the basket. Shemya saw it. We’ve always got a good connection, and she hit me with the perfect pass.”

It was the textbook bounce pass, taking DeShazo right to the rim from the left side. DeShazo is Catawba’s leading scorer for the season and she was athletic enough and strong enough to catch the ball and make the layup through contact, as the whistle blew. Her bucket tied the game. Her free throw — it took a friendly bounce before dropping — gave the Indians a one-point lead.

“The backdoor is one of our options off the play we ran,” Baxter said. “Those two are smart players. They made the right read.”

DeShazo, like most of her teammates, had been having a rough offensive day. She was 0-for-4 on 3-pointers, but when Catawba desperately needed a bucket, she got it.

Catawba still had to play one more defensive possession.

Tusculum played for the last shot — and got a good look. Arnwine was open in the right corner and let it fly with a second left. Her shot was a bit long, striking the far side of the rim and caroming back toward her, as the Indians celebrated.

“It seemed like that ball was in the air for five minutes,” Baxter said with a laugh. “But I could tell from the trajectory that it wasn’t going in unless it took a crazy bounce.”

Tusculum did a lot of things right, making eight 3-pointers and winning the turnover battle, 18-17. Turnover margin is usually what makes Catawba a special team.

But the Indians got points from eight players and nine had at least one rebound. Keyotta Garris had eight points and eight rebounds. DeShazo scored 10. Thorne had nine. Phillips only played nine minutes, but made two of Catawba’s four 3-pointers.

“For all the shots we missed and mistakes we made, we were always right there,” DeShazo said. “It was a hard game. No one had a great day, but as a team we found a way to win.”

Catawba had prevailed at Tusculum, 78-71, in November.

Catawba’s next three games are on the road. The Indians won’t play at home until Feb. 8.