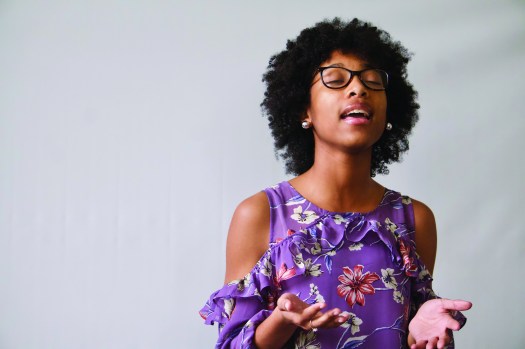 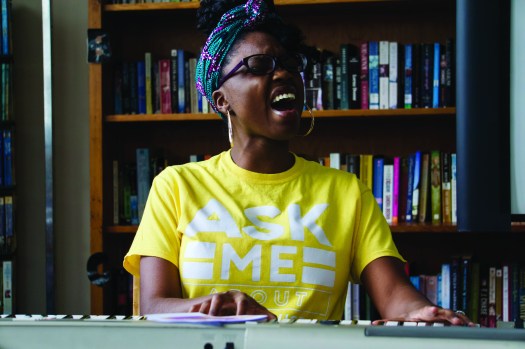 SPENCER – The Spencer Public Library on Thursday played host to a local recording artist and her vocal student.

Destiny Stone, a Catawba College alumna, and her vocal student Mia Mason, a ninth grader at Salisbury High School, came out to sing for a group of seventh-grade chorus students from North Rowan Middle School.

In addition to being a recording artist, Stone is private teacher in Salisbury who also teaches elementary music in Gastonia.

Stone says one of her greatest influences is iconic singer Nina Simone, who became one of the most prominent American musicians of the 20th century, gaining widespread critical and popular recognition as a black artist in the middle of the century. Simone was also part of the American Civil Rights Movement and created political music even at the expense of her flourishing career.

Stone’s interest in Simone led her to play the singer in theater and perform her music. Stone has a performance titled “Nina Now,” which blends Simone’s music with her own. During the show, Stone, who also plays piano, performs 10 of Simone’s songs and five of her own.

Stone wrote a song during her sophomore year at Catawba for which she later recorded and created a music video called “Black Girl,” which was shown to the students Thursday. She also performed Simone’s classic “Four Women.”

Stone’s message to students: Do not be afraid to try new things. Opportunities came to her because she sought them out, even when they seemed like longshots

Mason also performed for the students, including one of her original songs and Marvin Gaye’s “What’s Going On.”

Mason wants to pursue music as a career, and became interested in the idea after she realized how much she enjoyed singing in school talent competitions.

Spencer Librarian Beverly McCraw said she tries to host events at the library each month as a way to bring more people to the facility. Since she began hosting events in the space, McCraw said, the amount of visitors has increased. She made a point of letting the kids know they can get their parents to sign them up for library cards at the end of the presentation.

McCraw connected with Stone via social media. Stone said she enjoys teaching and being around students.

Stone also teaches private piano lessons and has a nonprofit, Music House. Stone said her goal is to combine music education and opportunities for children. She and her fiancé have an old house for which they are raising money to transform into a venue and small studio. The goal is to eventually host after school programs and summer camps as well.