You’ll get caught by ‘Deathtrap’ at Lee Street 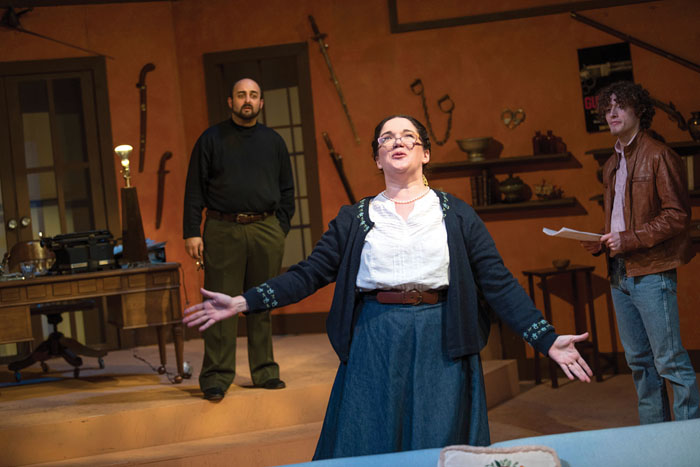 Be prepared to gasp and jump out of your seat at Lee Street theatre’s production of the thriller “Deathtrap.”

You’ll be laughing one moment, fretting the next as the scene turns ominous. What seemed impossible is happening right before your eyes.

Ira Levin wrote this thriller back in 1978, and it ran for four years on Broadway. It was also made into a 1982 movie starring Michael Caine, Christopher Reeve and Dyan Cannon.

Here, Lee Street’s Executive Director Rod Oden plays the role of Sidney Bruhl, a previously successful playwright who has had a series of flops and is desperate for a winning script.

His wife Myra, played by Beth Bentley, has gone through most of her family money and suffers from a heart condition.

They have a new neighbor, the psychic Helga Ten Dorp, played by Lori Van Wallendael. Could this be a problem?

A student, Clifford Anderson, played by Michael Meres, from a seminar Sidney taught, sends him a new play — a great play, commercially promising and called “Deathtrap.”

Myra is afraid Sidney will steal the play and make it his own. She’s afraid of a lot of things, actually, sort of the nervous type. And Sidney’s scruples must have been stored away in the garage a while ago.

She suggests Sidney give Clifford a call to talk about it — to suggest a collaboration.

And they’re off in a race to see who does what to whom and why and who wins and who dies and who gets to stage the play.

Oden’s Sidney is full of manic energy, even in his seeming surrender to reason. Sidney does not handle defeat well. He’s whiny and loud and overbearing and egotistical. Oden makes him totally believable, even though the character does unbelievable things.

Bentley’s Myra is a soft, sort of frumpy wife, obviously relegated to taking care of Sidney and staying in the background. But Bentley plays Myra’s fears so well, the audience will feel their pulses speeding up, too.

Meres has the nonchalant pose, the golden curls and just enough naiveté and steely resolve. He shines later in the play, when his true nature is revealed and greed drips from his fingers.

Lori Van Wallendael’s Helga is not quite as crazy as some have played the part. Eccentric, yes, but the emphasis here is on making her somewhat believable. She feels pain, death, violence. Yes, she could be a problem.

The rest of the story has to remain unexplained, because there are so many spoilers lying in wait. The audience has to experience each shocking surprise as the moment arrives or it’s not as fun.

Suffice it to say there’s lust, greed, envy, pride — pretty much all of the seven deadly sins worked in, and there are consequences, always consequences.

“Deathtrap” is a play about a play that we never see, until it becomes something else in the second act.

The enormous set, to depict Sidney and Myra’s large living room, his spacious office on a platform, his collection of theatre posters and murder weapons — antique, mostly — also has the right amount of doors and dark spaces, even though it is wide open.

The lighting is dark in many scenes, or used as a sort of weapon. Director Lena Olson also uses ominous music to build tension, which some may find unnecessary when the actors are rousing plenty of nerves, but it’s what we’re used to in entertainment — music to set the tone.

Oden, as if he doesn’t already have enough to do, is the technical director and production designer, with co-scenic designer Dominic Basotti and master carpenter Lucas Barrick.

You will be shocked and amazed at what develops in this two-act play that runs two hours and 30 minutes. It won’t feel like that long. And the second act  has just as many, maybe more, thrills than the first.

How do you suppose it’s going to end? Not the way your think it will, but nothing in this play is as you think it will be.

It does include adult language and themes, so is not suitable for younger audiences. It is an awful lot of fun. Your adrenalin will go up and stay up — it’s a good cardio workout.