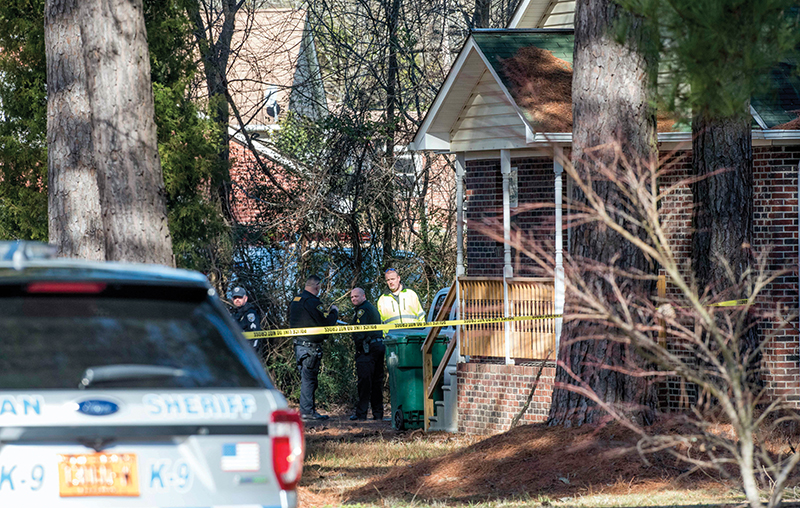 JON C. LAKEY/SALISBURY POST Two men were reported shot and killed on Wednesday morning in what police are calling a murder/suicide. It happened on the 400 block of North Main Street in Granite Quarry. Police and deputies were seen investigating the crime scene around the duplex or triplex apartment building. Granite Quarry,North Carolina,1/22/20.

GRANITE QUARRY — Police say a Rockwell man arrived at the North Main Street home of his estranged wife Wednesday morning and waited before he shot and killed a Franklin firefighter and himself.

Granite Quarry-Faith Police Chief Mark Cook said he wouldn’t named people involved at this time “due to these tragic events and to respect the privacy of all families involved.” He later provided an incident report that said Andrew Lee Myers, 26, of U.S. 52 in Rockwell, was the deceased suspect in the incident. Tyler William Hamilton, 30, of Leonard Road, was listed as the victim.

Cook said Granite Quarry-Faith Police was sent to 412 N. Main St. at about 11 a.m. about a call involving shots being fired and heard coming from a residence. There were several 911 calls received by the Rowan County Communications Center.

The first arriving officer on the scene observed a male subject lying in the driveway with serious bodily trauma and the officer immediately requested emergency medical services. The officer then observed a second male victim lying just inside the home, also suffering serious bodily trauma. Cook said it was evident both victims had died from to the injuries sustained at the scene.

Cook said all involved in the shooting were at the scene of the incident and there were no additional threats to the public. It appeared to be the result of a domestic situation that took a turn for the worse, he said.

Cook said the suspect in the case, who is estranged from his wife, arrived at her residence and was lying in wait inside a pickup truck, Cook said. When the victim, Hamilton, walked out of the house, Myers reportedly stepped from the truck and fired one shot from a shotgun, striking the victim in the head, according to Cook and incident reports. The suspect then walked inside the residence, confronted his wife and then turned the gun on himself, Cook said.

A young woman standing outside the home, who was visibly upset, spoke to detectives while there. She was wearing socks and no shoes and was seen being carried by a Granite Quarry firefighter to the car of a detective waiting to interview her.

Another woman who arrived on the scene, and is believed to be the mother of the young woman, demanded that officers let her see her daughter. The woman was asked to wait until investigators were finished.

The Rowan County Sheriff’s Office assisted in the investigation.