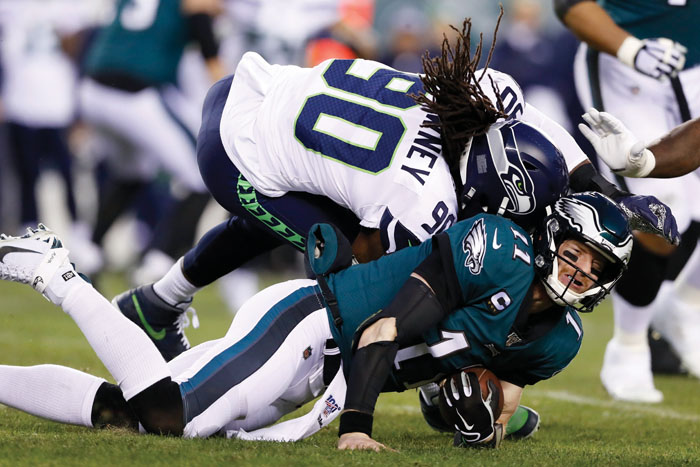 NEW YORK (AP) — The NFL said on Thursday that the number of concussions players suffered increased slightly this season over 2018.

The league said about one-third of concussion evaluations “have some element of self-report.”

A prominent recent example was Eagles quarterback Carson Wentz, who reported a concussion after Seattle’s Jadeveon Clowney hit him helmet-to-helmet from behind in the first quarter of a 17-9 loss in an NFC wild-card game. After that game, Stills called Wentz “heroic” for reporting his concussion.

The league also said that 99-plus percent of players were wearing “green” or best-performing helmets. Helmet safety is determined in laboratory studies. VICIS Zero1 was the top-rated helmet for three consecutive years. However VICIS, which started in 2013 and had included quarterbacks Russell Wilson and Aaron Rodgers as investors, entered into receivership last month after facing financial troubles.

The NFL made the announcements at its health and safety briefing.

HOLLYWOOD, Fla. (AP) — A warrant has been issued for the arrest of NFL wide receiver Antonio Brown following accusations that he and his trainer attacked another man near Brown’s Florida home.

Officers responded Tuesday afternoon to a disturbance call, where the alleged victim said Brown and his trainer, Glen Holt, hit him, police said. Holt was arrested a short time later and charged with one count of burglary with battery.

Officers attempted to make contact with Brown but were unsuccessful, Latta said.

Police didn’t immediately identify the alleged victim or what prompted the confrontation.

Brown, who is a free agent, played nine seasons with the Pittsburgh Steelers. He was traded to the Oakland Raiders last year but released before ever playing a regular-season game following several off-the-field incidents. He was then signed by the New England Patriots, who released Brown in September after a second woman in 10 days accused him of sexual misconduct.

The trooper stopped Williams, the 45th pick overall in the 2019 NFL draft, at 9:37 p.m near mile marker 333 in Cumberland County. Williams, 22, was arrested for speeding along with possession of a controlled substance, possession of legend drugs without a prescription and possession of drug paraphernalia, according to information from the THP.

Williams reportedly posted a $37,500 bond and was released Jan. 18 from the Cumberland County Jail with a hearing set for Feb. 21.

A Patriots spokesman said the team is aware of the reports of Williams’ arrest, but offered no further comment.

The Nashville native played at Vanderbilt before being drafted. He played nine games for the Patriots.