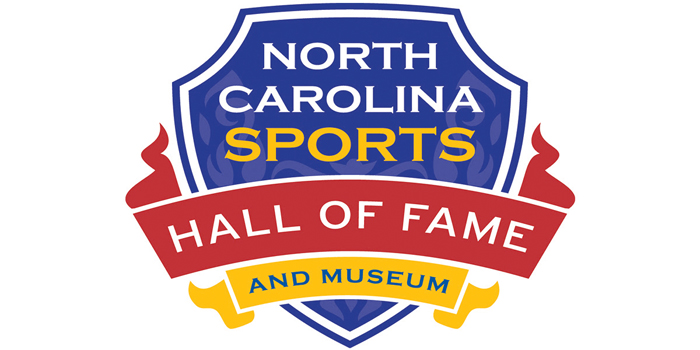 The class will be enshrined during the 57th annual induction banquet on May 1, at the Raleigh Convention Center. An afternoon news conference will be held on April 30, at 4 p.m., at the North Carolina Museum of History, also in Raleigh.

“This year’s class encompasses all fields of athletics, including professional, collegiate, high school and special achievements,” said Nora Lynn Finch, president of the Hall. “This 58th class of inductees and their outstanding accomplishments continue to build on the rich sports heritage of North Carolina. We look forward to celebrating this special time in our state’s sports history.”

The Sports Hall of Fame was established in 1963. A permanent exhibit, the North Carolina Sports Hall of Fame is located on the third floor of the state Museum of History in Raleigh and features a significant collection of memorabilia donated by inductees. The museum is open Monday through Saturday from 9 a.m. to 5 p.m. and Sunday from noon to 5 p.m. Admission is free.

Debbie Antonelli – Antonelli’s athletic career began as a three-sport athlete at Cary High School and a three-year basketball starter at NC State. Now entering her 30th season (in 2020) as a sports broadcaster for such agencies as ESPN, CBS, Fox Sports, Big Ten Network, and Westwood One, Antonelli is one of the best-known female college and professional women’s basketball television analysts in America today. An Emmy Award and Gracie Award winner, she became the first woman in more than two decades to be named a color analyst during the NCAA men’s basketball tournament, providing background information about players and teams.

Tyrone “Muggsy” Bogues – After a standout career at Wake Forest University, the 5’3″ Bogues defied odds and played 14 years in the NBA—he is still the shortest player in NBA history. As a Demon Deacon, he led the ACC in both assists and steals and was All-ACC First Team in his senior year. In 1987 Bogues was the 12th overall selection in the NBA draft. He went on to coach the Charlotte Sting for one year, and he is now a team ambassador for the Charlotte Hornets, where he played 10 seasons. In NBA stats, Bogues currently ranks 23rd in career assists (6,726) and 20th in assists per game (7.6).

Mack Brown – Brown is one of a handful of coaches in college football history to lead two separate programs to top-five national finishes. The Tennessee native has served as head coach for more than 30 seasons, with stops at Appalachian State University (1983) and University of North Carolina–Chapel Hill (1988–1997, 2018–present). One of the most respected and successful coaches, his 244 career victories (as of 2020) rank 10th on the all-time list; he is a two-time College Football Coach of the Year. Brown has compiled a record of 244–123–1 (.664) in his tenure as a head coach and is 13–8 in post-season bowl games, his 2005 Texas team winning the national championship with a 41–38 win over the University of Southern California.

Dennis Craddock (deceased) – Craddock coached the men’s and women’s cross-country and track-and-field teams at the University of North Carolina–Chapel Hill for 27 years and won 45 conference championships—more than any coach in any sport in ACC history. He was named ACC Coach of the Year 31 times, and 19 of his athletes competed in Olympic Games, resulting in five gold and two bronze medals. He retired from coaching in June 2012.

Dr. Charles Kernodle – As of 2019, 102-year-old Kernodle continues his work as team doctor at Burlington’s Walter M. Williams High School—a job he’s done for more than 60 years, missing only a few home or away games during that time. To honor his contributions, the football field at Williams was named after him on his 90th birthday in 2007. In addition to his duties at Williams, Kernodle has helped with the football and basketball teams at Elon University.

Mac Morris – A member of the NCHSAA Hall of Fame and co-executive director of the North Carolina Coaches Association (since 1976), Morris served as head basketball coach at Greensboro’s Walter Hines Page Senior High School for 25 years and compiled a 456–151 (.751) record that included Class 4A titles in 1979, 1983 and 1990. Both his 1983 and his 1990 teams were undefeated at 26–0 and 31–0, respectively. In addition, the 1983 team was ranked second nationally by USA Today and led to Morris being named AP Coach of the Year.

Trot Nixon – As a senior at New Hanover High School in Wilmington, Nixon was named the state’s player of the year—in both football and baseball—as well as Baseball America’s national player of the year. Upon graduation in 1993, he was offered a scholarship to play quarterback at NC State; instead, he left for Boston, as a first-round draft pick of the Red Sox. He was playing right field on the 2004 team that won Boston’s first World Series in 86 years. A right fielder, Nixon hit .274 in a 12-year major league career that boasted 137 home runs and 555 RBIs. In 42 post-season games, he hit .283 with 6 home runs and 25 RBIs.

Julius Peppers – One of the most celebrated players in professional football history, Peppers finished his 17-year career after playing 266 games, the record for a defensive lineman, and making a total of 724 tackles, including 159.5 sacks—fourth best in NFL history. In addition, the 13 kicks he blocked are the second most ever in the NFL, as are his 51 forced fumbles. At the University of North Carolina–Chapel Hill, Peppers led the nation in sacks (15) in 2000, and he was a unanimous All-America pick in 2001; he also won the Chuck Bednarik Award as the nation’s best collegiate defensive player and the Lombardi Award as the best collegiate lineman.

Bobby Purcell – He has served in many capacities at NC State since joining the athletics department staff in 1981, including assistant football coach and recruiting coordinator under Monte Kiffin, Tom Reed, and Dick Sheridan. But Purcell’s legacy will also include his tenure as executive director of the Wolfpack Club, where he oversaw construction of the Wendell H. Murphy Football Center and C. Richard Vaughn Towers (which overlook Carter-Finley Stadium) and led a number of successful financial campaigns, which included the funding of nearly 300 student-athlete scholarships annually.

Judy Rose – In 1990, when she accepted the role at the University of North Carolina–Charlotte, Rose became the third female to serve as athletic director of an NCAA Division I program. It was a position she held for 28 years. In 1999–2000, she also became the first female to serve on the prestigious NCAA Division I Men’s Basketball Committee. Chief among her accomplishments with UNC–C was the overall growth of the school’s athletic department, which culminated in the unveiling of its football program in 2013.

Tim Stevens – One of only six North Carolinians in the National High School Hall of Fame, Stevens built a nationwide reputation for reporting high school athletics. The Garner native received a number of prestigious awards—including recognition from the Associated Press Sports Editors organization as one of the top-10 sports reporters in the country—during his 48 years of covering high school sports for the Raleigh Times and Raleigh’s News & Observer. He is a member of the NCHSAA Hall of Fame; in fact, its media award is named in his honor.

Donnell Woolford – A three-sport star at Douglas Byrd High School in Fayetteville, Woolford moved south to attend Clemson University, where he earned All-ACC and All-America honors twice and helped the school’s football team to ACC championships in each of his final three seasons before graduation. In 1989 he was a first-round draft pick of the Chicago Bears. There, he was a Pro Bowl selectee in 1993 and an All-Pro in 1994; he also started every game from 1989 through 1996 with the Bears and ranks third in interceptions (32) for the team.

Ticket information for the banquet is available at ncshof.org.

About the NC Sports Hall of Fame