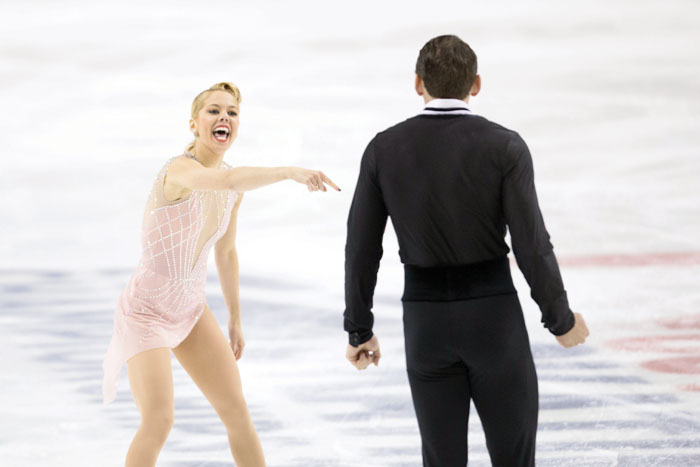 Alexa Knierim reacts pointing to Christopher Knierim at the completion of their program in the senior pairs at the U.S. Figure Skating Championships Thursday, Jan. 23, 2020 in Greensboro, N.C. They are in currently in first place after the program. (AP Photo/Lynn Hey)

By BARRY WILNER AP Sports Writer
GREENSBORO (AP) — Bradie Tennell’s usual clean and efficient short program was enough to take the women’s short program Thursday night at the U.S. Figure Skating Championships.
Tennell, the 2018 American champion, can be like a metronome; what she lacks in pizzazz she makes up for with predictability. She was so solid that she beat 2019 winner Alysa Liu in a bit of a surprise.
“I am proud of how I skated,” Tennell said after earning 78.96 points. “I love the program, it really embodies me.”
There’s nothing wrong with Tennell’s style at nationals, but it tends to get overshadowed on the international scene. Of course, that’s not a concern this week.
“Luckily, I don’t have to compete against them here,” Tennell said with a smile when asked about the Russian jumping machines who dominate the sport.
The youngest U.S. winner last year at age 13 — she’s not even eligible for senior international events yet — Liu is more daring with her jumps than any other American. She landed a triple axel, the only one of the competition, but stepped out on the landing, which was costly.
She was 3.56 points in back of Tennell.
Mariah Bell took third and might have challenged Liu had she not fallen at the end of her footwork. Bell shook her head as if to scold herself for such a bobble.
Two-time U.S. champion and 2014 Olympic team bronze medalist Gracie Gold, attempting a comeback after mental health issues derailed her career, was 13th. She drew a heartful ovation from the crowd at the end of her error-filled routine.
Gold said that considering where she was when she began her return, the night was a nine out of 10. As for the performance, after a long pause she rated it “three out of 10. OK, four.”
Glenn had her best performance at nationals, an energetic and fast-paced routine that had her overcome with emotion when she was done.
Earlier, Olympians Alexa and Chris Knierim, coming off a poor season, put that disappointment far behind them in winning the pairs short program.
The husband/wife couple that helped the United States win a bronze medal at the team event of the 2018 Games in South Korea, took a lead of nearly seven points with what they both said was a long-sought clean performance.
“It was nice to be comfortable on the ice and put out a great short program,” he said. “Nothing felt easy going through it, but regardless we know we can put out a program like that. For us, it’s been a long road to get here.”
hat road included a dismal 2018-19 campaign in which they changed coaches and locations, basically, Alexa said, living out of suitcases. It came a season after they won their second U.S. crown and was marked by a seventh-place finish at nationals last January.
They didn’t have strong fall showings either, but they were ready Thursday. Their triple twist was huge, as was their throw triple flip. The Knierims cleanly landed their side-by-side triple toe loops, often a major obstacle for them.
“We’ve been driven to skate like this and it always seemed something would get in the way,” Alexa Knierim said. “It’s been a while since we skated like that.”
Tarah Kayne and Danny O’Shea te 2016 national champs, were second at 70.35 points. Defending champion Ashley Cain-Gribble and Timothy LeDuc were third at 68.86.
The free skate is Saturday.